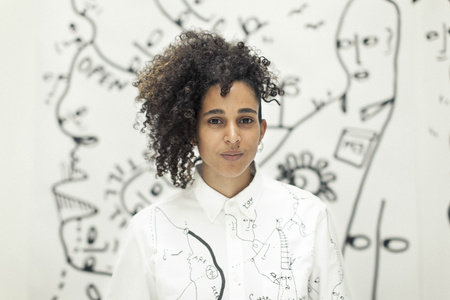 SHANTELL MARTIN is a graduate of Central Saint Martins, London, a leading center for art and design education. Her work has graced the cover of the New York Times home section and has appeared in Creative Review magazine, People, Mass Appeal, California Home + Design, and VieMagazine, among other publications. Named French Glamour’s “New York’s coolest it girl,”  she has collaborated with prominent commercial brands, as well as with bespoke luxury partners like Kelly Wearstler, 3×1 denim, Suno, and Jawbone.

She regularly creates live digital drawings at conferences, musical performances, and museums, including the Brooklyn Museum, the Museum of the Moving Image, and the Museum of Modern Art in New York. Martin has been a visiting scholar at MIT Media Lab and is also an adjunct professor at the Interactive Telecommunications Program (Tisch School of the Arts, NYU).