Behind the Reads: Editing The Wander Society

A note from Meg Leder, editor of THE WANDER SOCIETY by Keri Smith

In 2006, I had one of the most fortuitous lunches of my editing career with Faith Hamlin, an agent at Sanford Greenburger. We sat at the now-closed Steak Frites in Union Square and near the end of the lunch, she handed me a project in a manila envelope, telling me I should take a look at it when I was back at my desk.

That project was a one-of-a-kind Moleskine mockup of Keri Smith’s Wreck This Journal, a magnificently and quietly subversive little book that we bought three days later, and that went on to sell several million copies worldwide, leading to eight subsequent books and legions of devoted Keri Smith fans.

In the ten years since, I’ve shared with Keri ideas and prompts for dream projects. However, in true subversive fashion, Keri always politely acknowledges them, then sends back completely different ideas that are more genuine and amazing than anything I could come up with on my own.

So it should have come as no surprise to me that when I asked Keri to consider writing a creativity manifesto—a way to share the integrity that drives her work—she came back to me with a manifesto actually written by someone else: a secret group called The Wander Society.

But it did surprise me, and in the most delightful ways imaginable. Because after signing up the book, I started receiving mysterious letters in the mail—strange musings typed on a real typewriter, an envelope of maple tree seeds, a small, badge with hand-embroidered with a lightning bolt.

The Wander Society was reaching out to me, inviting me to join—the lines between reader and editor and author and member starting to blur.

And so this summer I found myself on the shore of Lake Michigan, tying a small Wander Station filled with the society’s pamphlets around a tree. This fall, on my sabbatical in Paris and London, I left behind stickers of Walt Whitman, the patron saint of the Wander Society. A few weeks ago, I spent the afternoon wandering through the Lower East Side, ambling down streets I’d never explored before.

I don’t know who exactly The Wander Society is, but I know that Keri’s a member now, and I am too. I know that the regular practice of wandering has opened me up to the possibility of surprise, newness, and the joy that come from discovering new places.

Turns out, I really like the freedom of not knowing exactly where we’re going next—whether it’s a literal journey or a publishing one. 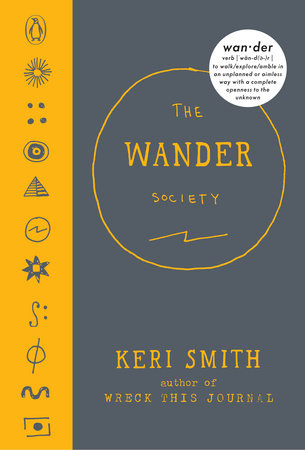