25 years ago, Julia Alvarez wrote In the Time of the Butterflies, the story of four young women from a pious Catholic family that were assassinated in 1960 in the Dominican Republic after visiting their husbands who had been jailed as suspected rebel leaders. The Mirabal sisters became mythical figures in their country, where they were known as Las Mariposas (the butterflies).

This extraordinary story of love, courage, resistance, and family has since inspired other works of fiction, movies, plays, and dances and become an American Library Association Notable Book and a 1995 National Book Critics Circle Award nominee. To celebrate both Julia, a National Medal of Arts recipient, and the anniversary of her bestselling classic, Algonquin Books, Penguin Random House, and Repertorio Español have teamed up to offer one winner the “Ultimate Julia Alvarez Gift Package.” This gift bundle includes some of the author’s bestselling titles, both in English and Spanish signed by the author, as well as two tickets to an upcoming feature of the adapted play En el Tiempo de las Mariposas (In the Time of the Butterflies) at the Repertorio Español in New York City. 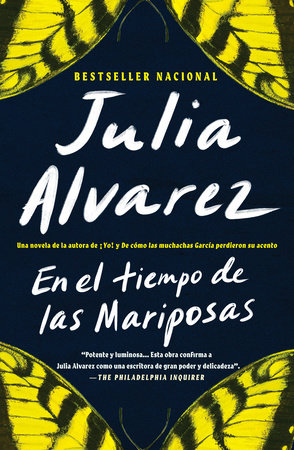 In 1960 in the Dominican Republic, four young women from a pious Catholic family were assassinated after visiting their husbands who had been jailed as suspected rebel... Read more >

Enter for a chance to win here!