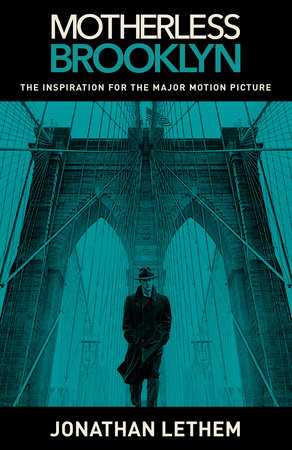 The questions, author biography, and suggested reading list that follow are intended to enhance your group’s reading and discussion of Jonathan Lethem’s Motherless Brooklyn, winner of the National Book Critics Circle Award.

In a wonderfully original twist on the classic hard-boiled detective novel, Lethem presents a narrator with Tourette’s Syndrome and gives his unusual hero a way with words that at first intrigues and then totally captivates the reader. Even among the orphan misfits and oddballs growing up in St. Vincent’s Home for Boys in Brooklyn, New York, Lionel Essrog stands out. In the grip of Tourette’s Syndrome, Lionel is burdened with uncontrollable urges to count and tap things, stroke floors and doorframes, and, most embarrassing of all, kiss his classmates. But nothing is quite so troubling to Lionel as his painstakingly suppressed verbal tics, the strings of odd phrases and bursts of insults that bubble through his mind. He retreats to the Home’s library, hoping to find in that vast repository of words a clue to his own language. Lionel’s liberation comes from a far less likely source, however. Frank Minna, a local tough guy and fixer, selects him and three other boys to do odd jobs, and over the years shapes the motley crew into the "Minna Men," a highly unorthodox detective agency. Minna relishes Lionel’s tics and quirks and under his tutelage, Lionel gives free reign his Tourettic self. So when Minna is left for dead in a Dumpster, Lionel is determined to be a real detective and find the killers.

In an investigation that quickly takes on the sporadic rhythms of his own mind, Lionel faces off with his partners at the agency; the two eccentric, aging mobsters Minna reverently referred to as "The Clients"; Zen Buddhists on Manhattan’s Upper East Side; and Minna’s tough-talking, very alluring widow, Julia. Ever present is Brooklyn itself–the scruffy neighborhoods where old-fashioned bosses and their unspoken rules hold at bay both the anarchic impulses that simmer among Brooklyn’s multiethnic population and the slick, Manhattan-style sophistication encroaching from Brooklyn Heights and other yuppie enclaves.

Written with sly humor and filled with dazzling wordplay, Motherless Brooklyn takes the traditional conventions of detective fiction–a hero alone in his quest for justice, a plot that twists and turns with each new clue, and a cast of characters whose motivations are revealed with mounting suspense–to new heights of storytelling inventiveness.

1. For readers who come to Motherless Brooklyn with little knowledge of Brooklyn, what devices, beyond straightforward descriptions, does Lethem use to capture its distinctive atmosphere?

2. Lionel’s wordplay includes variations on his own name—Liable Guesscog, Final Escrow, Ironic Pissclaim, for example. How does this particular quirk serve to establish Lionel’s sense of himself and his place in the world? Is there an internal logic about the variations or are they simply haphazard?

3. The Minna Men are all orphans, first introduced as teenagers. Discuss how each of them carves out an identity for himself and why this is important to them. How do the initial descriptions Lionel provides of Tony [p. 39], Gil [p. 40], and Danny [p. 42-43] foreshadow the relationships among the four as adults? Do their characters change in the course of the novel?

4. Does Minna see himself as more than a boss to the young men? Does he make a conscious effort to turn the group into a family or does the family feeling develop from the needs of the young men themselves? What evidence, if any, is there that Minna’s interest in them is emotional as well as practical? In what ways does Minna’s relationship with his own mother and older brother influence the way he treats the Minna Men?

5. Why does Lionel say "it was Minna who brought me the language, Minna and Court Street that let me speak" [p.37]? What parts do Tony, Gil, and Danny play in helping Lionel accept his Tourette’s Syndrome? How do their individual ways of dealing with Lionel differ? Which man’s support is the most significant to Lionel both as a teenager and as an adult?

6. In describing Gil’s explanation of Minna’s kidnapping and murder, Lionel says "English might have been his fourth or fifth language from the sound of it" [p. 94]. Why does Lethem include this observation and other examples of mangled language throughout the book? How do they put Lionel’s own "language difficulties" in perspective?

7. In addition to Lionel’s wonderful, often poetic riffs, what other specific language patterns does Lethem employ to bring the various characters to life? For example, how do Lionel’s conversation with the homicide detective [pp. 109-111], his initial encounter with Kimmery [p. 135] and his interview with Matricardi and Rockaforte [pp. 176-177] create impressions of these particular people that are independent of Lionel’s own perceptions?

8. What role does Julia play in the novel? In what ways is she the stereotypical "dame" of other hard-boiled detective novels and films and how is she different? Do you think Julia is right when she says "No woman would ever want you, Lionel. . . . That’s not really true. They might want you. . . . But they’ll never be fair to you" [p. 297]?

9. Is Kimmery also a stock figure in this tradition? How does Kimmery’s reaction to Lionel’s Tourettic behavior differ from the reactions of the other characters? Does the brief, romantic interlude between Lionel and Kimmery advance the plot and if so, in what ways? How does it affect your understanding of Lionel? Is Kimmery "fair" to Lionel?

10. The Zen Buddhist communities in New York and Maine are not at all what they seem. Are the characters who participate in the Buddhist Zendo—Lionel’s brother, Gerald, Julia, and Kimmery—influenced by Buddhist teachings? Do the principles of Zen Buddhism (either as expressed in the book by Kimmery or from your knowledge) illuminate some of the themes Lethem explores?

11. Does Lionel in fact become a "real detective"? Do his techniques fit your definition of detective work? Kimmery, for example, is skeptical about both his intentions and his working style [p. 255]. Do you think her evaluation is accurate? In other detective books you may have read, are the heroes completely removed from the personal aspects of the cases they investigate? Is the solution to Minna’s murder fully satisfying in light of the evidence presented in the rest of the book?

12. At several points in the book, Lethem makes direct reference to the genres that inform Motherless Brooklyn—both the classic detective novel and "wiseguy" novels and movies. For example, Minna teases Gil for saying "piece," rather than "gun" [p. 8]; and Lionel asks "Have you ever felt, in the course of reading a detective novel, a guilty thrill of relief at having a character murdered before he can step on to the page and burden you with his actual existence?" [p. 119]. In another passage, Lionel compares himself to the standard set in detective literature: "So many detectives have been knocked out and fallen into such strange, swirling darknesses . . . and yet I have nothing to contribute to this painful tradition" [p. 205]. Why does Lethem include these references? Are they simply there for "comic relief" or do they serve another purpose?

13. By using Lionel as narrator, Lethem is following a long tradition in detective fiction. In what ways would the impact on the reader be different if a third-person voice told the story? Why do you think he chose to use a narrator with Tourette’s Syndrome? Is this purely a literary device, giving him the opportunity to play with language as an author? Do the classic detective heroes—for example, Dashiell Hammett’s Sam Spade and Raymond Chandler’s Philip Marlowe—have quirks comparable to Lionel’s?

14. Does the title of the book refer only to the four orphans who make up the Minna Men? In what ways is Brooklyn itself "motherless"?

15. The Voice Literary Supplement wrote "Lethem loves to cross-wire popular genres and watch the sparks fly." In addition to the conventions of the hard-boiled detective novel, what other genre does Lethem draw on in Motherless Brooklyn?

Jonathan Lethem is the author of the novels Gun, With Occasional Music, Amnesia Moon, As She Climbed Across the Table, and Girl in Landscape, as well as a collection of stories, The Wall of the Sky, the Wall of the Eye. He is also the editor of The Vintage Book of Amnesia. He lives in Brooklyn, New York.
Learn More About Motherless Brooklyn (Movie Tie-In Edition)
print

A Ladder to the Sky
John Boyne

The Devil All the Time
Donald Ray Pollock