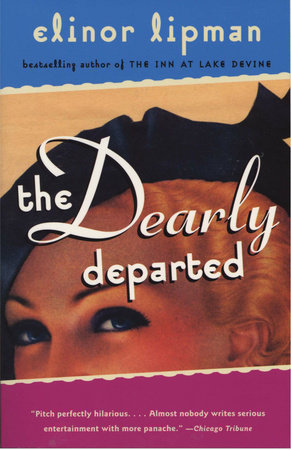 With her latest work, Elinor Lipman expertly serves up her usual delicious dish of entertainment. When the story opens, the not-so-sunny Sunny Batten has just received news that causes her to be even more morose than usual: her mother, Margaret Batten, has died in a freak accident with Margaret’s alleged fiancé, Miles Finn. Thus Sunny returns to the small New Hampshire town of King George and to the charity bungalow on the edge of the country club’s golf course where Margaret raised Sunny by herself. While at the funeral, Sunny catches her first glimpse of the brash Fletcher Finn, Miles Finn’s son and self-described possessor of “a heart of plutonium.” And who can’t help but notice, as they sit together at the graveside, the resemblance between Sunny and Fletcher, “the flagrant display, wherever one looked, of Miles Finn’s genes” [p. 79]?

But mourning does not become Sunny. Bitter memories of her childhood come flooding back, triggered by encounters with her high school golfing teammates—all boys—and her embarrassment at discovering what her mother’s new midlife hobby had been: acting. To Sunny’s mortification, Margaret had blossomed from a divorced wallflower to a much-admired amateur actress in the town’s local theatre troupe, the King George Players, and, as her daughter discovers, the object of widespread affection.

Sunny’s return to King George proves that one can go home again, as her grief segues into pleasant alliances with the townspeople, in spite of past grievances and perceived slights. Among the hilarious, realistic, and endearing cast of characters with whom Sunny becomes reacquainted are Joey Loach, the detention hall high schooler who has become the town’s heroic police chief; Emil Ouimet, the town physician who wears his love for Margaret on his sleeve; and Randy Pope, the golf-team-captain-turned-respectable-lawyer. Even the wealthy Emily Ann Grandjean, who hired Fletcher to promote her unattainable political aspirations, seems to sympathize with Sunny, and she soon comes to learn that maybe King George is not such a bad place after all.

1. What physical characteristics or personality traits did Sunny inherit from her mother and father, who was presumably Miles Finn?

2. Regarding Fletcher and Sunny, Emily Ann observes, “Appearances aside, you two seem like complete opposites” [p. 190]. Do Sunny and Fletcher share any similarities other than their physical resemblance? How does each feel about discovering a new sibling? Does it mean more to Fletcher or Sunny? Why?

3. How does Lipman use physical surroundings to create a presence for Margaret and Miles despite their being deceased before the novel begins? [See, for example, the description of Miles’s cabin in Chapter 14 and the contents of Margaret’s house in Chapter 15.]

4. Sunny asks Joey: “Would a truly grief-stricken daughter go directly from the cemetery to the golf course? Or, between the wake and the funeral, give herself a pedicure” [p. 228]? Given the treatment of death and grief in the novel, how might these questions to be answered? Does Sunny handle her grief in an appropriate manner? A realistic manner?

5. A reviewer in The Atlantic Monthly noted, “Sunny learns a universal truth: Things get better after high school.” Do the memories of her high school harassment loom larger in Sunny’s mind than the facts support?

6. Is the grudge that Sunny holds against the high school boys’ golf team justified, or is Randy Pope fair in asserting that “some ladies roll with the punches. Some even laugh instead of carrying a grudge” [p. 137]?

7. In the small town of King George, everyone knows everyone else. This is highlighted best by Dr. Ouimet’s infuriating yet comical dilemma as he searches for someone in whom he can confide his feelings for Margaret: “Who in this town, be they counselor or clergy, wasn’t a patient?” [p. 215] How does Lipman paint life in King George and small town life in general?

8. About the golf course that was her backyard, Sunny says, “I know all the loopholes. All the best times to sneak onto the King George Links, virtually invisible” [p. 96]. And Sunny also comments about Margaret to Fletcher, “She was very conventional, and very worried about what other people thought. Above all else, she wanted to fit in” [p. 163]. As Sunny discovers, she was, and is, hardly invisible to the residents of King George. Moreover, her mother was somewhat less than conventional. In what other ways does The Dearly Departed explore this theme of appearance versus reality?

9. Joey’s mother hovers over and clearly adores her son. What does their relationship say about Joey, and how do his mother’s regular appearances advance the plot?

10. Despite their completely different upbringing, do Emily Ann and Sunny have anything in common? What significance do people’s socioeconomic backgrounds have in King George?

12. Compare the characters who actively engage in life, such as Margaret, Randy Pope, Emil Ouimet, to those who choose to remain more passive, such as Regina Pope, Emily Grandjean, and Billy and Christine Ouimet. Into which category might Sunny, Fletcher, or Joey be placed? In The Dearly Departed, do people actually change, or is it just perceptions that change?

13. What role does dialogue play in The Dearly Departed? How do conversations reveal feelings and promote both character and plot development? What makes the conversations in the novel realistic?

14. Lipman has been called “a queen of verbal economy” (Boston Magazine). An example might be when we are told that Randy Pope, Sunny’s former archenemy, tracked down Margaret’s personal effects “in person, and found it misfiled in Concord” [p. 252]. Can you think of other examples of the author’s narrative shorthand?

15. Reviewer Maggie Galehouse writes, “If the cast of NBC’s Friends beamed into Thornton Wilder’s Our Town, the result might well be Elinor Lipman’s latest novel. Set in King George, N.H. (a town that rivals Grover’s Corners in size and sensibility), The Dearly Departed has the charm and economy of Wilder’s play, along with the quick-witted, intently quirky characters of a successful sitcom” (The New York Times Book Review, July 15, 2001). Is the comparison between The Dearly Departed and a television sitcom apropos? If you are familiar with the Thornton Wilder play Our Town, how is it similar to The Dearly Departed?

16. To what genre of literature does The Dearly Departed belong? Is there a theatrical or dramatic style to the novel?

17. Neal Wyatt remarks, “It is a rare treat to read a book that is at once utterly modern but also evokes the world of Wooster and Jeeves” (Booklist, May 15, 2001). What elements of The Dearly Departed bring about this dichotomy of modernism and quaintness in prose, plot, descriptions, and characters?

18. Is the ending of The Dearly Departed a happy one? Is it satisfying or anticlimactic? Why might Lipman have chosen to end the novel where she does and leave certain questions unresolved? For example, what happens to Billy? Were Miles and Margaret actually engaged or not? Will Fletcher become romantically involved with Emily Ann? Based upon the ending, would you characterize Lipman as an optimist? A romantic?

Elinor Lipman is the author of seven works of fiction, including the bestselling Isabel’s Bed and a collection of stories. Writing about The Inn at Lake Devine for The New York Times Book Review, critic and author Lore Dickstein said, “Like an inspired alchemist, Lipman has converted serious subjects into humor in her previous novels as well: the rights of birth mothers in Then She Found Me, interracial dating in The Way Men Act, and sexual politics in Isabel’s Bed.”

Born and raised in Lowell, Massachusetts, Lipman graduated from Simmons College where she studied journalism and began writing fiction in an adult education workshop at Brandeis University (10 weeks for $40). Her first short story was published in 1981 in Yankee Magazine, and her first book (stories: Into Love and Out Again) was published in 1987. She writes essays and book reviews when prevailed upon (The New York Times, The Boston Globe, Self, More, Salon), but prefers to devote her time to novel-writing. Then She Found Me, The Way Men Act, and The Ladies’ Man are all in development as movies. The New England Booksellers Association awarded her its 2001 fiction award for a body of work. Lipman describes herself as overly fond of coffee, the telephone, e-mail, cookbooks, yarn stores, cable news, and reading. Her husband and teenage son agree.

If You Were Here
Jen Lancaster

No! I Don’t Want to Join a Book Club
Virginia Ironside

In the Drink
Kate Christensen

Walking in Circles Before Lying Down
Merrill Markoe

Nose Down, Eyes Up
Merrill Markoe

The Revenge of the Radioactive Lady
Elizabeth Stuckey-French

I Think I Love You
Allison Pearson

A Friend of the Family
Lisa Jewell

This Year It Will Be Different
Maeve Binchy
Back to Top