The Art of the Personal Essay Reader’s Guide 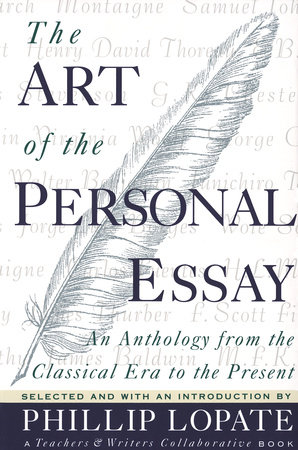 The Art of the Personal Essay Reader’s Guide

print
The Art of the Personal Essay Reader’s Guide

For more than four hundred years, the personal essay has been one of the richest and most vibrant of all literary forms. Distinguished from the detached formal essay by its friendly, conversational tone, its loose structure, and its drive toward candor and self-disclosure, the personal essay seizes on the minutiae of daily life-vanities, fashions, foibles, oddballs, seasonal rituals, love and disappointment, the pleasures of solitude, reading, taking a walk — to offer insight into the human condition and the great social and political issues of the day. The Art of the Personal Essay is the first anthology to celebrate this fertile genre. By presenting more than seventy-five personal essays, including influential forerunners from ancient Greece, Rome, and the Far East, masterpieces from the dawn of the personal essay in the sixteenth century, and a wealth of the finest personal essays from the last four centuries, editor Phillip Lopate, himself an acclaimed essayist, displays the tradition of the personal essay in all its historical grandeur, depth, and diversity.

1) In his introduction, Lopate suggests that the personal essay implies a "certain unity to human experience." Does this principle of universality apply across different eras, different cultures? * How does a contemporary reader find meaning in such essays as Seneca’s "On Noise" and "Scipio’s Villa," Montaigne’s "Of Books," or even Orwell’s "Such, Such Were the Joys…"? Can you read your own concerns and experiences into the framework of these essays? * Choose an essay (or essays) from the "Other Cultures, Other Continents" section. To what extent does its theme have meaning for you despite the aspects of its content that may be alien to you?

2) Tanizaki’s "In Praise of Shadows" is a value-inverting essay, meaning that the writer takes something usually denigrated or despised and shows its worth–or takes something usually valued and cuts it down to size. Compare Tanizaki’s approach with other value-inverting essays: Montaigne’s "Of a Monstrous Child," Cowley’s "Of Greatness," Hazlitt’s "On the Pleasure of Hating," Stevenson’s "An Apology for Idlers," Chesterton’s "On Running After One’s Hat," Beerbohm’s "Going for a Walk," Lopate’s "Against Joie de Vivre." What elements and/or techniques seem common in this type of essay?

3) On page xxix of the introduction, Lopate probes some of the differences between autobiographies and personal essays. With these distinctions in mind, think about the pieces listed in the Contents by Form under "Memoir." How (other than in economy of space) do these pieces differ in focus from traditional memoir writing? When you tell a story from your own life, do you use similar techniques?

4) How do the authors of memoir essays (or any that take their own lives as their subjects) keep from sounding egotistical and self-absorbed? Do they ever seem self-indulgent to you?

5) In "Once More to the Lake," E.B. White presents a more or less idyllic picture of an American boyhood tinged with innocence. Compare to the boyhoods in Stevenson’s "The Lantern-Bearers," Orwell’s "Such, Such Were the Joys…," and Baldwin’s "Notes of a Native Son."

6) Many of these writers (quite self-consciously) use contradictory arguments to make their point. How do you see this technique used in Montaigne’s "On Some Verses of Virgil," Lamb’s "A Chapter on Ears," Stevenson’s "On Marriage," Tanizaki’s "In Praise of Shadows," and Hoagland’s "The Threshold and the Jolt of Pain"?

7) In a slight variation on the above technique, an essayist may adopt a tone that seems inappropriate to his or her subject, even perhaps to the point of undermining it. Consider Cowley’s sincerity in "Of Greatness," Edgeworth’s in "An Essay on the Noble Science of Self-Justification," Hazlitt’s in "On the Pleasure of Hating," and Beerbohm’s in "Laughter." In each case, does the essay’s tone provide an implicit commentary on its content? What effect does this tactic have on you?

8) Compare White’s description of a spectacle in "The Ring of Time" with Hazlitt’s "The Fight" and Turgenev’s "The Execution of Tropmann."

10) Examine the personas of one or more of these essayists. What sort of man does Montaigne strike you as being? How does Lamb present himself to the reader? (How about Thoreau or McCarthy?) List their traits and characteristics: Which of these does the author admit to and which do you deduce by reading between the lines? Do you find these personas sympathetic or unappealing?

11) In any given essay, how does what the author conveys to you about him or herself affect your reading? How important is it to you to find the author sympathetic?

12) "The enemy of the personal essay is self-righteousness," writes Lopate. How does the essayist put forth a strong opinion without falling back on this vice?

13) Compare Thoreau’s approach to nature in "Walking" with Hoagland’s in "The Courage of Turtles," Berry’s in "An Entrance to the Woods," and Dillard’s in "Seeing."

14) Lopate finds ample support for his description of the personal essayist’s "idler" persona in the many essays included in this anthology simply on the subject of walking. Compare the content and tone of these essays by Steele, Hazlitt, Stevenson, Beerbohm, Woolf, and Thoreau.

15) Unlike the more meandering tone of some of these essays, a number of them begin very suddenly, with a strong first line that grabs the reader’s attention immediately. Look at the beginnings of such essays as Seneca’s "On Noise," Mencken’s "On Being an American," Fitzgerald’s "The Crack-Up," and Sanders’s "Under the Influence." How might you read these differently from the other pieces in the anthology?

16) What other contemporary authors have you read whose writings might be called personal essays? What qualities do their pieces have in common with the essays in this anthology?

17) If you were to write a personal essay, what topics would you consider appropriate or interesting? Do you see it as a format for light, diverting commentary or for more weighty issues and assertions (or both)? What experiences of yours might you draw on to get your point across?

Phillip Lopate is the author of Against Joie de Vivre, Bachelorhood, The Rug Merchant, Being With Children, and Confessions of Summer. A recipient of Guggenheim and National Endowment for the Arts fellowships, his works have appeared in Best American Essays, The Paris Review, Pushcart Prize annuals, and many other publications. He lives in New York City and is Adams Professor of English at Hofstra University.
Learn More About The Art of the Personal Essay
print

Six Characters in Search of an Author
Luigi Pirandello

Owls and Other Fantasies
Mary Oliver

A Draft of Light
John Hollander

The Art of the Essay, 1999
Phillip Lopate