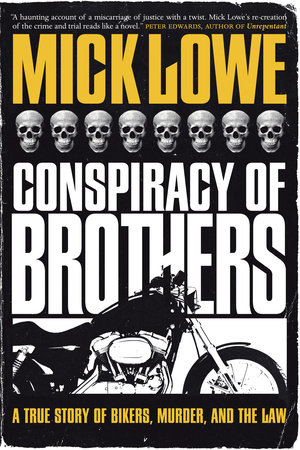 A True Story of Bikers, Murder and the Law

About Conspiracy of Brothers

To coincide with Random House Canada’s publication of the groundbreaking book Unrepentant by Peter Edwards and biker Lorne Campbell, Vintage Canada updates and reissues the award-winning true crime classic that tells the complete and scandalous story in the most gut-wrenching chapter of Campbell’s life. You can’t read one without wanting to read the other!

On the night of October 18, 1978, small-town biker Bill Matiyek was having a drink in a Port Hope bar. A gunman suddenly walked up and fired 3 bullets into his head. Members of the rival bike club Satan’s Choice, who were in the bar, quickly vanished. Was it a cold-blooded gangland-style execution, as the Crown Attorney and police would argue, or the compulsive act of a single gunman? Was the trial that followed driven by persistent police work or a police frame-up? Did the bikers conspire to murder or did the law conspire to convict them? Guilt by association, unreliable eyewitness testimony, suppression of evidence, botched police procedures–call the results justice or call them revenge, the question remains: Who really killed Bill Matiyek, and why?

Mick Lowe was born in Omaha, Nebraska, and immigrated to Canada in 1970. Lowe’s journalism has appeared in a range of publications such as Maclean’s, Canadian Business, Canadian Lawyer, the Globe and Mail and on CBC Radio. He followed his… More about Mick Lowe

“A haunting account of a miscarriage of justice with a twist. Mick Lowe’s account reads like a novel.”
—Peter Edwards, author of Unrepentant: The Strange and (sometimes) Terrible Life of Lorne Campbell, Satan’s Choice and Hells Angels Biker and co-author of The Encyclopedia of Canadian Organized Crime

“The narrative of the trial makes gripping reading.”
—Toronto Star