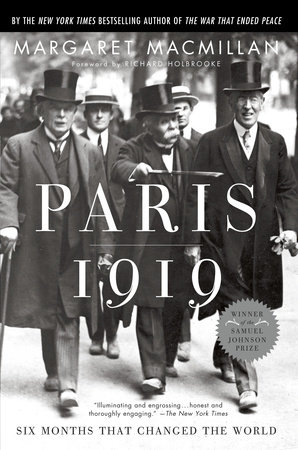 1. In 1919, Europe had just been through a devastating war, which left political, social, and economic turmoil in its wake. The war also had a considerable impact on the Middle East and parts of Asia and Africa. What were the main issues and concerns facing the peacemakers in 1919?

2. Some historians–Arno Mayer, for example–have argued that the peacemakers of 1919 were determined to prevent the spread of revolution westward from Russia. To what extent did fear of Bolshevism shape the decisions made in Paris?

3. It has often been said that there was a gulf between Woodrow Wilson and his new diplomacy, on one side, and the Europeans and their old diplomacy on the other. Discuss what is meant by the new and the old diplomacy. Was there in fact such a gulf?

4. What did Woodrow Wilson mean by “national self-determination”? Why did some of his colleagues, such as Robert Lansing, worry about it? What impact did the notion of self-determination have? Was it easy to put into effect?

5. Each country in Paris had its own concerns and aims. Evaluate the main interests that each of the major powers–France, Great, Britain, Italy, Japan, and the United States–brought to the table.

6. The peace settlements, in particular the resolution with Germany, have often been blamed for the outbreak of World War II. Was the Treaty of Versailles as punitive, unfair, and vindictive as has often been said?

7. Discuss the ways in which decisions made in Paris affected China and Japan. Did the relationship between the two countries grow better or worse as a result?

8. The Paris Peace Conference was the first major international peace conference where the press was present in force. In addition, the leaders of the powers had to pay attention to the views and wishes of their electorates. How important was public opinion in the making of the peace settlements after World War I?

9. A number of countries had designs on the territory of the Ottoman empire after World War I, and the Ottoman empire itself was in no position to fight back. Nevertheless, why did the Treaty of Sèvres remain a dead letter? In what ways was the later Treaty of Lausanne different?

10. During the war, the Allies–the British and the French in particular–made a number of agreements and promises about the Arab parts of the Ottoman empire. To what extent have those agreements and the decisions made by the peacemakers about the Middle East had an impact on developments there since?

11. Although Woodrow Wilson is often seen as the person responsible for the League of Nations, many people, both in Europe and North America, shared his goals. What was the League supposed to accomplish? Why is it often described as a great experiment?

The Artist, the Philosopher, and the Warrior

Freedom’s Forge
Back to Top