The Girl in the Blue Beret Reader’s Guide 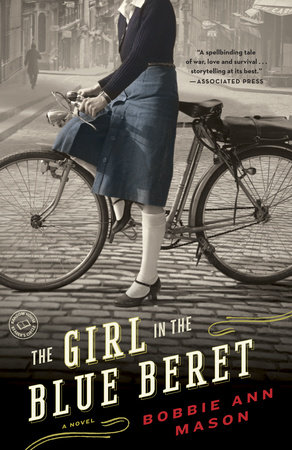 The Girl in the Blue Beret Reader’s Guide

print
The Girl in the Blue Beret Reader’s Guide

My father-in-law was a pilot. During  World  War  II, he was shot down in a B-17 over Belgium. With  the help of the French
Resistance, he made his way through Occupied France and back to his base in England.  Ordinary  citizens hid him in their homes, fed him, disguised him, and sheltered him from the Germans. Many families willingly hid Allied aviators, knowing the risks: They would have been shot or sent to a concentration camp if they were discovered by the Germans.
In 1987 the town in Belgium honored  the crew by erecting a memorial  at the  crash site, where  one  of the  ten  crew members died. The  surviving crew was invited for three  days of festivities, including a ﬂyover by the Belgian Air Force. More than three thou- sand Allied airmen  were rescued  during  the war, and an extraor- dinarily  deep  bond  between  them  and  their  European  helpers endures even now.
My father-in-law, Barney Rawlings, spent  a couple  of months hiding out in France in 1944, frantically memorizing  a few French words to pass himself off as a Frenchman, but his ordeal had not inspired in me any ﬁction until I started taking a French class. Suddenly,  the  language  was transporting me  back  in  time  and across the ocean, as I tried to imagine a tall, out-of-place  American struggling to say Bonjour. Barney had a vague memory of a girl who had escorted him in Paris in 1944. He remembered that her signal was something  blue—a scarf, maybe, or a beret.  The  notion  of a girl in a blue beret seized me, and I was off.
I had my title, but I didn’t know what my story would be. I had to go to France  to imagine  the country  in wartime.  What  would I have done in such circumstances of fear, deprivation,  and un- certainty?  What   if my  pilot  character   returns   decades  later  to search for the people who had helped him escape?
Writing a novel about World  War II and the French  Resistance was a challenge both  sobering  and thrilling.  I read many riveting escape-and-evade  accounts  of airmen  and of the  Resistance  net- works organized  to  hide  them  and  then  send  them  on  grueling treks across the Pyrenees  to safety. But it was the people I met in France and Belgium who made the period come alive for me. They had lived it.
In Belgium, I was entertained lavishly by the people  who had honored  the B-17 crew with the memorial,  including  by some of the locals who had witnessed the crash landing. I was overwhelmed by their generosity. They welcomed me with an extravagant three- cheek kiss, but one ninety-year-old man, Fernand  Fontesse,  who had been in the Resistance and had been a POW, planted  his kiss squarely on my lips.
In a small town north  of Paris I met Jean Hallade. He had been only ﬁfteen when Second Lieutenant Rawlings was hidden in a nearby house. Jean took a picture  of Barney in a French  beret,  a photo to be used for the fake ID card he would need as he traveled through France  over the next few months,  disguised as a French cabinetmaker. And in Paris I became friends with lovely, indomitable  Michèle Agniel, who had been  a girl guide in the  Resistance.  Her  family aided ﬁfty Allied aviators, including Barney Rawlings. She takes her scrapbooks  from  the  war years to schools to show children  what once happened.  “This  happened  here,” she says. “Here  is a ration card. This is a swastika.” She pauses. “Never again,” she says. The characters  in The Girl in the Blue Beret are not  portraits  of actual people,  but  the  situations  were  inspired  by very real individuals whom I regard as heroes.

1. Discuss the special bond between  Allied aviators and their European helpers. Why did it take so long for many of them to re- unite after the war?

3.  Re-read  and  discuss the  images  of ﬂight  throughout the novel. How does the ﬁnal sentence tie in with these?

4.  What  is Marshall’s feeling about the young man he remem- bers as Robert?  Does  Marshall  romanticize  him? Why  is ﬁnding Robert  so important to Marshall?

6.  Why is Marshall so unprepared for what Annette reveals to him? How does he deal with her story? What possibilities lie ahead for him?

7.  The name Annette Vallon is inspired by a historical ﬁgure, a woman who was William Wordsworth’s lover during the French Revolution  and the mother  of his illegitimate  child. What  sugges- tions are being made by the use of the name here? What  else can you learn about Annette Vallon from further  research?

9.  What  do mountains  mean to Marshall?  Trace the  impor- tance of mountains  at different stages of his life.

10.  How does Marshall look back on his war experience? How does his perspective change during the course of the novel?

11.  How  do the  experiences  in the  book  compare  with  your own experiences of war? Have you ever known anyone captured during wartime?

13.  How  do you interpret the  ending?  Review the  emotional developments that lead up to the last lines, especially Marshall’s thinking as he falls to sleep the night before. Based on your under- standing of the characters and their situation, what do you imagine they are likely to do next? How  does the aviation term,  “gaining altitude,” apply here?

Learn More About The Girl in the Blue Beret
print

The Road Back
Erich Maria Remarque

The Way of the Traitor
Laura Joh Rowland