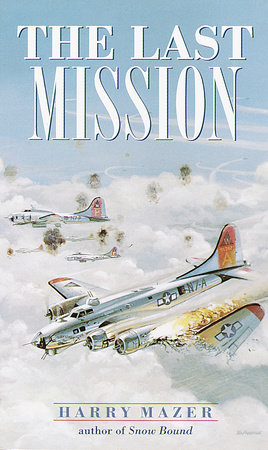 Fifteen-year-old Jack Raab is eager to fight Hitler when he enlists in the Air Corps during World War II, but seeing his best friend killed when their plane is shot down makes him wonder if there is any meaning to all the deaths.

The following books are also discussed in this guide:

Soldier’s Heart by Gary Paulsen
Soldier’s Heart is the gripping, heartwrenching story of war as seen through the eyes of Charley Goddard, a 16-year-old who enlisted in the First Minnesota Volunteers in June 1861 and fought in almost every major battle in the Civil War.

The Red Badge of Courage by Stephen Crane
This is the classic story of a young soldier’s first two days in battle during the Civil War.

Under the Blood-Red Sun by Graham Salisbury
After the Japanese attack Pearl Harbor, it is the friendship and loyalty of eighth-grader Tomi Nakaji’s baseball buddies that help him through this terrifying time.

Harry Mazer’s The Last Mission is drawn closely from his experiences as a seventeen-year-old in the Army Air Corps. Like Jack, he was a Jewish boy from the Bronx full of fantasies about heroism, and like Jack, he became a waist gunner and never fired his guns. He remembers, "I was scared every time we flew….On our 26th mission we flew over Pilzen, Czechoslovakia, to bomb the Skoda Munitions Works. We missed our target, turned over the target again, and were hit. I saw Mike, who was our radio operator, frozen in the door of the radio room. He never made it out of the plane. Only three of us parachuted….No one in the plane lived." ( ALAN Review, Fall 1980)

Harry Mazer is the editor of Twelve Shots: Outstanding Short Stories About Guns, where twelve authors explore the extreme emotions that guns provoke in all of us. Walter Dean Myers, Rita Williams-Garcia, Richard Peck and other well-known authors create a riveting collection of short fiction that explores the emotion-driven world of guns.

Getting Started: Thinking About War

Have the class take the following opinion poll, noting whether they agree or disagree. There are no right or wrong answers. The only identifying marks on the students’ papers should be an "M" or "F" to indicate the gender of the student, for tallying purposes.

Tally the answers on three separate charts, for the class as a whole and for boys and girls separately. Discuss any patterns that emerge. Retain the chart until the end of this unit and use with the culminating activity below.

Research the general outlines of World War II as it was fought in Europe. What did Hitler do that began the fighting? Which countries were the Axis and which the Allies? When did the United States enter the war? What was the pattern of movement of the armies across Europe? How was the air war important to the outcome?

Friendship
Jack feels a close bond with the other men of The Godfathers crew because they share danger together. Have you ever been part of such a group: a sports team, for example, or the cast of a play? Write an essay describing the people in the group and how you felt about them.

Heroes
Write your own definition of a hero. Why does Jack turn down the chance to be called one by his older brother? Do you think he was a hero or not?

Social Studies/The Holocaust
Research the genocide of the Jews by Nazi Germany. Write a report on the Dachau, Buchenwald, or another concentration camps.

Music
Mazer refers to several songs of World War II, both as chapter headings and in the story. Ask a grandparent or other adult to sing one of these songs so you can teach it to the class. What memories does this song bring back for them?

Language Arts
Write a letter from Dotty to Jack, showing how little she understands about what he is enduring, in spite of her friendly intentions.

Compare Jack’s reasons for enlisting with those of Charley Goddard and Henry Fleming. Which do you think is more valid? How does Jack feel about the war when he comes home? Would he be more likely to agree with Charley or Henry?

World War II has been called "The Good War" because it seemed that good and evil were so clearly defined in the two sides. Do you think there can be a just war? What kind of enemy actions would make you feel it was necessary to fight?

At the culmination of the unit on the Images of War, have students retake the opinion poll from the Getting Started section of this guide. Compare the results with the first time the class answered these questions. Have their attitudes changed? Why?


Written by Patty Campbell, author of Presenting Robert Cormier and 1989 winner of the American Library Association’s Grolier Award for distinguished service to young adults and libraries.

An ALA Best Book for Young Adults

"The reader feels his shock and grief at losing his friends, suffers with him the doubts and apprehensions that being a Jewish prisoner inevitably raise, and, especially, experiences with him the bewildering mixture of relief and repugnance that comes with returning to civilian life."– The New York Times Book Review

"Told in a rapid journalistic style. . .the story is a vivid and moving account of a boy’s experiences during World War II as well as a skillful, convincing portrayal of his misgivings as a Jew on enemy soil and of his ability to size up–in mature, human fashion–the misery around him."– The Horn Book

Learn More About The Last Mission
print
Back to Top