Tears of the Giraffe Reader’s Guide 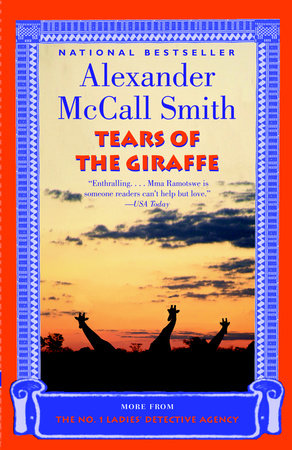 Tears of the Giraffe Reader’s Guide

The introduction, discussion questions, author biography, and suggestions for further reading that follow are designed to enhance your group’s discussion of Alexander McCall Smith’s Tears of the Giraffe, the second novel in the acclaimed Precious Ramotswe series.

Tears of the Giraffe finds Precious Ramotswe firmly established as Botswana’s first and only lady detective. She’s not getting rich, but she’s not losing money either, and under the imaginary ledger for happiness, her account is full. Indeed, she is about to marry Mr J.L.B. Matekoni, owner of Tlokweng Road Speedy Motors. Mr J.L.B. Matekoni is a thoroughly honest and loving man, a man whose generous impulses not only send him to the local orphanage to fix a water pump free of charge but also, somehow, bring him home with two small children. Now Mma Ramotswe has not only a husband but a family to care for, something she had not allowed herself to hope for after her own child died at birth.

But into this rich, full life comes Mrs. Curtain, an American whose son disappeared in the Kalahari desert ten years ago. Michael Curtain had been living in a commune, working on finding a better way to grow vegetables in the harsh land of Botswana, when he vanished one night without warning and without a trace. Stricken with grief, Mrs. Curtain has searched in every way possible for years, exhausting every avenue of inquiry, until the American Embassy recommended Mma Ramotswe. And even though Mma Ramotswe knows that old unsolved cases such as the one Mrs. Curtain brings her are what is known in the business as “stale enquiries,” she agrees to try to discover what happened to Michael Curtain.

Given her own experience of losing a child, she can empathize with Mrs. Curtain. And in many ways empathy—between Mma Ramotswe and Mrs. Curtain, between Mr J.L.B. Matekoni and the orphan children, even between wheelchair-bound Motholeli and the engine of a van—is the central theme of Alexander McCall Smith’s extraordinary novel. The idea that we are all “brothers and sisters” is what guides the story, sustains the lives of its remarkable characters, and offers readers so much more than the satisfaction of seeing a mystery solved.

1. What distinguishes Tears of the Giraffe from most other mysteries? What qualities make it such a charming and affirmative book? In what ways does Mma Ramotswe differ from such archetypal detectives as Sherlock Holmes, Sam Spade, and Philip Marlowe?

2. Mrs. Curtain says that when she first came to Africa, she had “the usual ideas about it—a hotchpotch of images of big game and savannah and Kilimanjaro rising out of the cloud . . . famines and civil wars and potbellied, half-naked children staring at the camera, sunk in hopelessness” [p. 27]. How does her experience of Africa alter these ideas? Why does she feel that “everything about my own country seemed so shoddy and superficial when held up against what I saw in Africa” [p. 29]? What deeper and truer understanding of Africa does the novel itself offer readers who might share Mrs. Curtain’s preconceptions?

3. Mma Ramotswe knows that Mrs. Curtain’s case—finding out what happened to her son ten years ago—is what is referred to in The Principles of Private Detection as “a stale enquiry” [p. 61]. Why does she accept the case, in spite of that? What special empathy does she feel for Mrs. Curtain?

4. When Mr J.L.B. Matekoni wonders why his apprentice mechanics take everything for granted, a friend explains, “Young people these days cannot show enthusiasm. . . . It’s not considered smart to be enthusiastic” [pp. 80-81]. Is this an accurate observation? Where else does the novel demonstrate this kind of understanding of human behavior?

5. Why does Mr J.L.B. Matekoni allow himself to be talked into adopting the orphans? What specific memory enables him to open his heart to them? What does this act say about his character?

6. Mma Ramotswe thinks that “the Americans were very clever; they sent rockets into space and invented machines which could think more quickly than any human being alive, but all this cleverness could also make them blind” [p. 113]. What is it that she thinks Americans are blind to? Is she right? How do her own values differ from those of mainstream America?

7. Tears of the Giraffe poses some difficult moral dilemmas for Mma Ramotswe. Should one always tell the truth, or is lying sometimes the better choice? Does a moral end justify immoral means? Which cases raise these questions? How do Mma Ramotswe and her assistant Mma Makutsi answer them?

8. When Mma Ramotswe prepares her accounts for the end of the financial year, she finds that “she had not made a lot of money, but she had not made a loss, and she had been happy and entertained. That counted for infinitely more than a vigorously healthy balance sheet. In fact, she thought, annual accounts should include an item specifically headed Happiness, alongside expenses and receipts and the like. That figure in her accounts would be a very large one, she thought” [p. 225]. What enables Mma Ramotswe to live happily? How would most American CEOs and CFOs respond to the accounting innovation she suggests in the above passage?

9. How is Mma Ramotswe able to solve the mystery of Mrs. Curtain’s son’s disappearance? What role does her intuition play in figuring out what happened to him? Why is this information so important for Mrs. Curtain?

10. When Mma Potokwane tells Mr J.L.B. Matekoni that their pump makes a noise, “as if it is in pain,” he replies that “engines do feel pain. . . . They tell us of their pain by making a noise” [p. 77]. Later, he tells his apprentice, “you cannot force metal. . . . If you force metal, it fights back” [p. 198]. What do these statements reveal about Mr J.L.B. Matekoni’s character? About his approach to being a mechanic? Are his assertions merely fanciful or do they reveal some deeper truth about the relationship between the human and the inanimate world?

11. One of Mma Makutsi’s classmates at the Botswana Secretarial College tells her that “men choose women for jobs on the basis of their looks. They choose the beautiful ones and give them jobs. To the others, they say: We are very sorry. All the jobs have gone” [p. 109]. In what ways does Tears of the Giraffe suggest ways around the stifling roles dictated by “brute biology”? What examples does it provide of girls and women overcoming the restrictions placed on them and assuming traditionally male roles?

14. In what ways is Tears of the Giraffe as much about family relationships as it is about solving crimes? How does the novel provide emotionally satisfying resolutions to the parental pain that both Mrs. Curtain and Mma Ramotswe have suffered?

Alexander McCall Smith is a professor of medical law at Edinburgh University. He was born in what is now known as Zimbabwe and taught law at the University of Botswana. He is the author of over fifty books on a wide range of subjects, including specialist titles such as Forensic Aspects of Sleep and The Criminal Law of Botswana, children’s books such as The Perfect Hamburger, and a collection of stories called Portuguese Irregular Verbs.

The World According to Bertie
Alexander McCall Smith
Back to Top