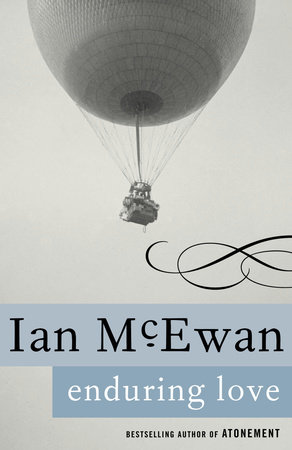 Ian McEwan’s novel Enduring Love showcases the author’s range and skill as he delivers unlikely, and welcome, combinations of suspense, ethics, philosophy, and political and religious ideology. In lesser hands, such a mix might be lethal. In McEwan’s, it’s intoxicating.

"What idiocy, to be racing into this story and its labyrinths, sprinting away from our happiness."

The opening chapter of this novel plunges readers into the story. Joe Rose and his wife, Clarissa, celebrate a work-imposed separation of six weeks with a celebratory picnic. The weather is perfect, their pleasure in each other apparent, their love and friendship strong. Then, a balloon accident that ends in tragedy near the field where they picnic changes everything. As Joe notes in the opening pages, "I linger on our dispositions, the relative distances and the compass point–because as far as these occurrences were concerned, this was the last time I understood anything clearly at all."

But the pivotal tragedy in the novel is not the death of a man during a balloon accident. No, McEwan takes a more interesting route. The tragedy is a psychological illness that threatens to destroy a man’s love and life. But whose illness is it? That’s a question McEwan poses throughout the book. Whom should readers believe? Is Joe Rose delusional and paranoid? Or is paranoia a healthy response to his life? Will another man’s mental illness destroy the authentic, deep happiness that Joe and Clarissa have at the novel’s beginning? A hint: This is one book where you don’t want to skip the appendixes.

1. Which is the enduring love the title refers to?

2. Look carefully at the first chapter and talk about the way in which it holds the promise of the whole novel.

3. The narrator says, "I’m lingering in the prior moment because it was a time when other outcomes were still possible" (page 2). Discuss this as a theme throughout the novel.

4. How does science infuse this story? Discuss the different theories described and explained and their importance to this novel.

5. The author writes of "…morality’s ancient, irresolvable dilemma: us, or me" (page 15) in relation to the balloon accident. Does this apply to other situations in the novel as well?

6. Joe describes how Clarissa views the trend in science toward neo-Darwinism, evolutionary psychology, and genetics as "rationalism gone berserk," and adds that she thought "everything was being stripped down…and in the process some larger meaning was lost" (page 75). Discuss this as a theme in the novel.

8. In chapter nine, the author switches from first-person to third-person point of view, where the reader is in Clarissa’s head as imagined by Joe. Talk about this unusual choice. What does it add to your understanding of Joe? Of Clarissa?

9. Did you doubt Joe, as Clarissa and others did? Did the author want you to?

10. In responding to Jean Logan’s theory of her husband’s tryst, Joe says, "But you can’t know this…it’s so particular, so elaborate. It’s just a hypothesis. You can’t let yourself believe in it" (page 132). Discuss the irony of Joe’s remembering, moments later, what he’s read about de Clerambault’s syndrome.

11. At the moment before Clarissa first tells him it’s over between them, Joe thinks about love, about how it "generates its own reserves." About how "conflicts, like living organisms, had a natural lifespan" (page 155). Later he notes that "…sustained stress is corrosive of feeling. It’s the great deadener" (page 231). In light of what happens in this novel, in what ways is Joe right or wrong about this?

12. In Enduring Love, characters at a police station have faulty memories of events. Talk about the role of unreliable perceptions in this novel.

13. "It’s like in banks. You never say money. Or in funeral parlors, no one says dead" (page 205). Though this is not a comic novel, the author uses observational humor throughout. Talk about other examples of humor in the novel.

14. The novel ends with the children and the river. What is the author saying with this choice?

15. In the appendixes, we’re reminded (with Jed’s letter) that "it is not always easy to accept that one of our most valued experiences may merge into psychopathology" (page 259). Is this true in your experience?

16. Why did the author choose to let us know that Joe and Clarissa reconciled (and adopted a child) with a line in a case study in the appendix?

In a 1987 interview in Publishers Weekly, Ian McEwan said, "[W]hen you love someone, it’s not uncommon to measure that love by fantasizing about his absence. You gauge things by their opposite." In McEwan’s works, the opposite is a theme. His characters may take action that seems opposite to all sorts of things, their best interests, their lovers, their friends, their morals, or their political, religious, or rationalist beliefs. This is the tension and the story. And it is this, along with his acute and beautifully written observations about the opposites that infuse our lives, that keep readers waiting for the next McEwan novel.

McEwan is the author of two short-story collections, First Love, Last Rites and In Between the Sheets, and eight novels: The Cement Garden; The Comfort of Strangers, short-listed for the 1981 Booker Prize; The Child in Time, winner of the 1987 Whitbread Novel of the Year Award; The Innocent; Black Dogs; The Daydreamer; Enduring Love; and Amsterdam, winner of the 1998 Booker Prize.
Learn More About Enduring Love
print

The Light of Day
Graham Swift

A Week in December
Sebastian Faulks