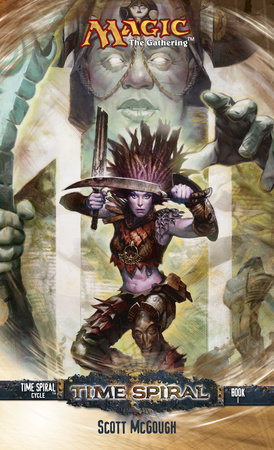 Time is Running Out!

The planeswalker Teferi at last returns to his home plane only to find it devastated and barren. Time itself is fracturing, and it’s up to Teferi and his companions to find a way to halt the collapse.It won’t be easy when his allies are poised to turn against him.

Scott McGough recently moved to farm country and can now compare the urban, suburban, and agrarian lifestyles. Not surprisingly, his first choice hasn’t changed since childhood: all things being equal, he’d rather be down the shore.Scott worked on The Duelist magazine before joining the Creative Team for MAGIC: THE GATHERING®. He worked on almost all the Urza/Phyrexia saga and has since written eight novels and a handful of short stories for MAGIC: THE GATHERING. All this, and yet he has only ever appeared on one Magic card. Though he finds this burden bitter and onerous, he will at least admit that that it’s a really good picture.

Scott McGough has studied writing at Johns Hopkins and the University of Washington, and has since written ten Magic: The Gathering novels (eight on his own, two with help), including the Kamigawa Cycle, The Legends Cycle Two, and the Time… More about Scott McGough