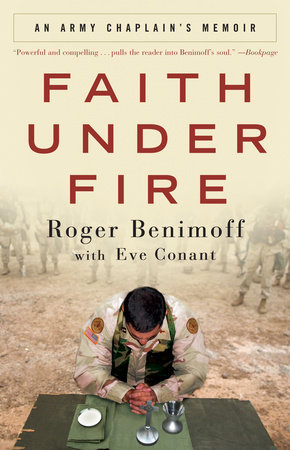 What do you think are some of the reasons that compel people to travel to warzones when they go by choice (not drafted into service)? Have you ever been drawn to a dangerous situation out of choice? If so, why?

What did Roger do to spiritually prepare for his second combat deployment to Iraq?  What are some ways you prepare, either psychologically or spiritually, for a difficult time?

How does a person care for him or herself?  What activities have worked for you?  What techniques did Roger use during deployment?  Do you think they were helpful?

Why did Roger emphasize the importance of being a “quiet presence” with his soldiers?

Why did Roger, as a college student, initially doubt his call to ministry?  Do you remember some key moments of questioning in your life that helped lead you to current profession or life role?

To prepare for his second deployment, Chaplain Benimoff gathered supplies and resolidified his bond with his prayer group.  What did he not anticipate?  Have you had a similar experience of being unprepared for a journey?  How so?

Do you think Roger’s journaling helped or hinders his ability to deal with his emotions in Iraq? After he returned home? If you journal, do you feel that it helps you?

In chapter 5, Chaplain Benimoff describes how he relied more on his clinical skills than on his faith.  How did he use his faith and how did he overlook his faith?  Talk about an experience that you’ve had where you relied on yourself more than God.

How do you imagine Rebekah felt as she assisted her neighbors with the death of their loved ones? Secondary Post-Traumatic Stress Disorder is a term that explains how caregivers and others who have not had a direct experience of trauma can still be affected by it. Has there been a tragedy affecting others that surprised you in how much it affected you?

Both while he was serving, and after he came home, how were Rebekah and Roger’s challenges similar?  How were they different?  What role did God play for each of them?

Rebekah’s and Roger’s relationship was extremely strained when he returned home, more than when he was in Iraq.  What brought the couple back together?

Can you think of a time when you an a loved one faced a crisis? How did you react similarly; how did you respond differently?

Rebekah journals about her faith and her experience with Roger, in what ways did her faith provide a foundation to stand on?

At one point in the book, Roger says that he hates religion and all who try to explain it.  Have you ever been so mad that you have questioned God and faith?  Does your religion allow you to be angry with God?

In what ways did Roger’s deployments strengthen his faith?  What gives you strength through difficult times?

Do you think a person can be a pastor and question God at the same time? Would you want counseling from someone who was questioning God?

Is there a final conclusion Roger comes to concerning his faith? What conclusions do you think he has drawn, or should draw from his experiences?
Learn More About Faith Under Fire
print

At Home in the World
Thich Nhat Hanh