I Was Amelia Earhart Reader’s Guide 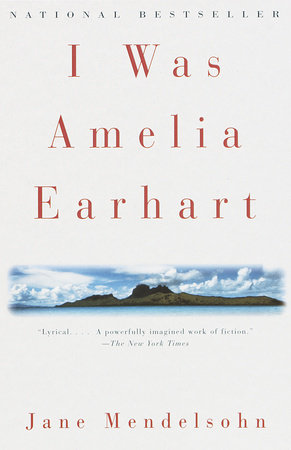 I Was Amelia Earhart Reader’s Guide

The questions, discussion topics, and author biography that follow are designed to enhance your group’s reading of Jane Mendelsohn’s I Was Amelia Earhart. We hope they will provide you with a number of ways of approaching this sensuous and imaginative first novel.

Jane Mendelsohn has revisited the mystery of Amelia Earhart’s legendary final flight, to continue the story from the glorious windy day when Earhart and her navigator disappeared into history somewhere over the mid-Pacific.

In this novel, charged with lyricism and longing, Amelia Earhart returns to life to tell us about her childhood, her marriage, her overexposed public life, and her eventual fate: marooned on a tiny island and lost to the world, she and her navigator find themselves living an adventure that even the world-famous heroine had never dreamt of.

While it is a brilliantly imagined meditation on the "afterlife" of its famous subject, Jane Mendelsohn’s novel is based closely upon the facts of Amelia Earhart’s life and the circumstances of her last flight. Its immediate inspiration came from a report by Richard Gillespie, published in Life magazine in April 1992, that he had found evidence that Earhart and her navigator, Fred Noonan, had landed on an island called Nikumaroro, 350 miles south of their intended destination.

On the morning of the second of July, 1937, Amelia Earhart took off from Lae, New Guinea, en route to Howland Island, a tiny stopping point in the mid-Pacific. She, Noonan, and her twin-engine Lockheed Electra were never seen again. This was her second attempt at an around-the-world flight, and she was only 7000 miles short of completion of her equatorial route. Although Fred Noonan was an excellent navigator, he had been fired by Pan Am for drinking, and during the flight Earhart reported "personnel problems" to her husband. In addition, Earhart had decided to drop the trailing antenna for her direction finder, and to leave behind in Miami her telegraph code key transmitter, for neither she nor Noonan knew Morse code. These decisions effectively cut them off from all but radio contact, and Earhart was often lax about giving position reports by radio. Only seven position reports were radioed by Earhart during their entire trip.

Born in Atchison, Kansas, in 1897, Amelia Earhart was hooked on aviation after her first flight in 1920.  She became a media celebrity in June 1928 when, at the invitation of George Palmer Putnam, the publisher of Charles Lindbergh’s We, she became the first woman to fly across the Atlantic (though, to her chagrin, as a passenger). Putnam created another instant bestseller when he issued the story of her flight. Shortly afterward, Putnam divorced his wife and married Earhart; he then became very much involved in promoting her career and generating publicity around her. He has been criticized for his single-minded pursuit of fame and money at the risk of his wife’s safety.

Earhart was a committed feminist and a friend of Eleanor Roosevelt. At the time of her disappearance, she was about to give up "stunt flying" in order to pursue flight research at Purdue University.  In the sixty years since her disappearance, the mystery of Earhart’s fate has provoked an enormous amount of both speculation and scientific inquiry, but nothing conclusive has ever been determined.

1. The novel’s opening phrase-"the sky is flesh"-is repeated several times in the course of the story. What are some of the meanings that are evoked by this unusual statement? Do these meanings change, for you, as the novel progresses? In what other ways are images and descriptions of the sky used to convey feelings or states of mind?

2. The verb in the book’s title is in the past tense, while the declarative statement indicates the continued presence of the speaker. On the first page of the novel’s prologue, Amelia Earhart speaks of "now," referring to "the life I’ve lived since I died." How does the novel play with the concept of time? How are the conventional categories of past, present, and future relevant? And to what uses does Jane Mendelsohn put them?

3. The novel alternates between third- and first-person narration. The author has Amelia Earhart give us a reason for this stylistic choice on page 10, and elsewhere Jane Mendelsohn has said, "Maybe this sounds too mystical, but Earhart was showing me how to tell her story: I think she would have liked it" [from an interview with Joanne Kaufman, People, 6/17/96]. What is the effect of this alternating narrative voice upon the emerging portrait of Amelia Earhart? What is its effect upon your experience of the story?

4. The author seems to emphasize a second and equally important meaning of the word flight-that which has to do with fleeing, escape, or escapism. Amelia Earhart tells us on page 41 that she and Noonan share "a secret craving for oblivion." What are the differences, if any, between Earhart’s obsession with flight and Noonan’s addiction to drink? Why does Earhart conclude that "there is no such thing as oblivion. Oblivion is a lie"?

5. Consider Amelia’s conversation with Owen, the reporter, on pages 34 to 37, in which the alarmingly negligent, even foolhardy aspects of the flight are discussed. Does Mendelsohn want us to conclude that Earhart had a death wish? Or that she was giving in to fate, or releasing control of her life, out of weariness, boredom, or some other reason? What might have provoked her to take such unnecessary risks?

6. Take a look at the following dense, lyrical passage: "The entire journey, flying as fast as possible like fugitive angels, took more than a month, during which time we spent our days feverish from the flaming sun or lost in the artillery of monsoon rains and almost always astonished by the unearthly architecture of the sky" [p. 39]. Also read the brilliant description of the plane’s descent, on page 58. How would you describe the style of the writing? What aspects-word choice, image, rhythm-are particularly striking?

7. Earhart’s last flight, like many others she made, was attempted in pursuit of a world record and for the sake of publicity. Her husband was promoting the book she would produce about her trip around the world (and after her disappearance he did publish a book in her name, Last Flight, from her notebooks and log reports). Is this book an imaginative effort to right the wrongs that Earhart suffered at the hands of her ambitious husband? How can a novelized "biography" such as this one revise our understanding of a historical figure?

8. Consider the scene at the Shwe Dagon Pagoda in Rangoon on pages 49 to 51. Why is Amelia so irritated by Noonan? What is the source of the conflict between them? How does this scene, along with the passage on pages 59 to 60, illuminate the character of each? Is their eventual love affair believable? Given their situation, is it inevitable?

9. How do you understand Amelia’s relationship to her Electra? How do you interpret the intensity of her desire to be in the plane, to be in the air? What happens on her "midnight voyages" [p. 81]? What does this novel tell us about solitude, our craving for it, and what Robert Frost called the "desert places" within ourselves?

10. The silk scarf and the compact mirror are important elements in our understanding of the appearance Amelia Earhart wishes to present to the world, even when she has just ditched her plane on a deserted island [p. 74]. Why did she depend so heavily upon her looks and her sense of style? Do you think people would be so fascinated with her if she were not so beautiful? Why does she eventually throw the mirror into the sea?

11. "It was as if what she had considered to be her self all these years was only a magnified detail of an enormous painting whose entire composition and narrative she had never before known existed, let alone seen" [p. 114]. How does life "after death"-life on the island-change how Amelia experiences herself? What does she mean by saying, on page 138, "I had been risking my life without living it"? Does this insight render her heroic exploits meaningless?

12. Part Three of the novel begins with an epigraph from Emily Bronte’s Wuthering Heights. How does this epigraph help you understand the lovers’ final flight from rescue? What light does it shed on your reading of the book as a whole?

13. This book deals in large degree with romance, fantasy, and wish fulfillment. What do you find most romantic about it? Do you leave the novel wishing that Amelia Earhart did survive her last flight? That she had another, different life after her life of fame?

14. Amelia Earhart is recognized as one of the great heroines of the twentieth century. How does this novel affect your sense of her heroic stature?

15. Jane Mendelsohn has remarked that "flying is a lot like writing. The solitude, the adventure and the physical aspect of it. Sitting in front of the computer I sort of felt like I was in the cockpit. And there’s the element of the unknown: the blank page and the empty sky" [interview, People, 6/17/96]. In what ways is flying a metaphor for the imagination? Why is Amelia Earhart a particularly good subject for an experiment in imagination?

The Book of My Life
Girolamo Cardano

The Home and the World
Rabindranath Tagore

The Wolf of Sarajevo
Matthew Palmer

King and Queen of the Universe (Stories)
Kurt Vonnegut

A History of Violence
Oscar Martinez

The Lake, the River & the Other Lake
Steve Amick

The Great Concert of the Night
Jonathan Buckley

Women in the Grove
Paula Peterson
Back to Top