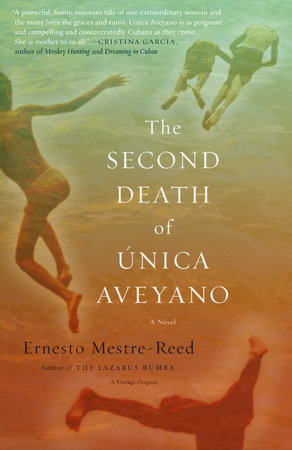 "A powerful, funny, resonant tale of one extraordinary woman and the many lives she graces and ruins. Única Aveyano is as poignant and compelling and concentratedly Cubana as they come. She is mother to us all." —Cristina García, author of Monkey Hunting and Dreaming in Cuban

The introduction, discussion questions, suggestions for further reading, and author biography that follow are designed to enhance your group’s discussion of Ernesto Mestre-Reed’s marvelously imaginative novel, The Second Death of Única Aveyano.

It is April 2000, the week before Elián González will be taken from his Miami relatives back to Cuba. Única Aveyano, recently diagnosed with cancer, has just made up her mind to climb to the rooftop of her nursing home. She needs to see the ocean “as it is when the moon flirts with its restless surface.” Her daughter-in-law wants her to have “daylong professional care,” but Única’s own restlessness, her longing for freedom, draws her into the ocean. And although she is rescued, she never fully comes back to this world, the world of Miami Beach, of nursing homes, of insolent daughters-in-law, angry husbands, and wayward sons, a world in which a boy like Elián could be turned away.

Alternating between Única’s memories of Cuba, before and after the revolution, and her present life in Miami and Brooklyn, The Second Death of Única Aveyano weaves a highly poetic, beautifully evocative exploration of one woman’s consciousness as she stands at the threshold of death. Única recalls the sudden deaths of her mother and stepfather, her own sheltered childhood, life with her husband Modesto, a lawyer for Cuba’s dispossessed whose career was cut short by the revolution, and her son Cándido, who becomes famous for rekindling the passion between estranged lovers but who cannot heal his own marriage. The public fight over the fate of Elián González and the reactions of Miami’s Cuban community provide another layer as the novel probes the tensions between limitation and freedom, familiarity and strangeness, home and exile.

In writing that is at once fantastically inventive and deeply realistic, Mestre-Reed creates a portrait of the inner life of one vivid, compelling, unforgettable, and indomitable woman.

1. The Second Death of Única Aveyano frequently refers to the story of Elián González, the five-year-old boy who was found adrift in the Atlantic Ocean, brought to Miami and, after much legal wrangling, sent back to Cuba. Why has Mestre-Reed included Elián’s story within his narrative? How is it relevant to the story of Única and her own family?

2. Why has Mestre-Reed given his novel the title of The Second Death of Única Aveyano? What is her first death? What are the implications of suggesting that a person might have more than one death?

3. Mestre-Reed begins his book with two epigraphs, from Homer and Sappho, about voyaging to strange lands and the longing to die. How do these passages illuminate the story that follows? Why has Mestre-Reed chosen to place his narrative within the context of Classical Greek literature? In what sense is The Second Death of Única Aveyano both a contemporary and a timeless story?

4. The Second Death of Única Aveyano does not unfold along the lines of a linear plot, choosing instead to circle around its main characters and events, and to move between past and present. Why has Mestre-Reed chosen this structure as a way to tell his story? What effects does he achieve by doing so?

5. Mestre-Reed’s prose is vividly descriptive and highly metaphoric. Modesto’s silence is “menacing and oversized as a butcher’s knife” [p. 25]; Única’s palate feels “like the soft rotted roof of a rain-soaked bohío, at any time ready to collapse from its own weight” [p. 26]. What other metaphors are especially striking in the novel? What does such figurative language add to the pleasure of the text?

6. Única writes to her grandson Patricio about the constancy of affliction, which “occurs as naturally as the bubbling of thick coffee in the morning,” and asks “What use pretending that we are living in an unparalleled nightmare, when whatever woe has befallen us has befallen others hundreds, thousands, millions of times?” [p. 43]. In what ways are the afflictions that befall Única like those suffered by others? What is the significance of her recognition of this shared suffering?

7. When Miriam comes to Cándido’s underground lair, he tells her “The problem with most lovers was that although they knew perfectly well how to be happy together and successfully, they knew very little about how to suffer propitiously, how to suffer with each other” [p. 107]. In what sense does this turn out to be true (or untrue) for Única and Modesto, and for Cándido and Miriam themselves? Why is the ability to suffer together so important?

8. What does The Second Death of Única Aveyano as a whole say about the complex and shifting nature of family relationships? What are the main sources of tension in Única’s family? What are its strongest bonds of affection?

9. When Única is rescued from the ocean, Miriam tells her, “you know what this has cost me—financially and emotionally. And we’re almost there, casi casi, Soon you’ll be as healthy as you have ever been. You’re coming out of it. Why this, then?” [p. 77]. Why does Única wander into the sea? Is Miriam in denial about her mother-in-law’s health? Why is there so much resentment between them?

10. What picture of life under Castro emerges from The Second Death of Única Aveyano? How do the characters in the novel feel about Communist Cuba? How does Modesto, in particular, view Castro?

11. Why does Única write letters to her grandson Patricio? How does she feel about him and the life he is living? What does she want him to know about his family?

12. At the very end of the novel, Única decides that she “will bathe. She will remove the hand towel and look at herself in the mirror for the first time in ages. Then. Then she will look, she thinks, rapturous” [p. 259]. Why does she decide not to have any more treatments for her cancer? Why does she feel she will look rapturous?

13. Mestre-Reed writes in a style that reflects the magical-realism of Gabriel García Márquez and other Latin American writers. In what ways do magical and realistic elements commingle in his prose?

14. What kind of woman is Única, finally? How does Mestre-Reed reveal her consciousness? In what ways is she unique? In what ways representative? What are the forces that have shaped her life and given it its specific trajectory?

Ernesto Mestre-Reed was born in Guantánamo, Cuba, in 1964. His family emigrated to Madrid, Spain in 1972 and in 1973 to Miami, Florida. He graduated from Tulane University with a B.A. in English Literature. He is the author of the highly acclaimed novel The Lazarus Rumba, teaches creative writing at Sarah Lawrence College, and lives in Brooklyn, New York.

Those Who Knew
Idra Novey
Back to Top