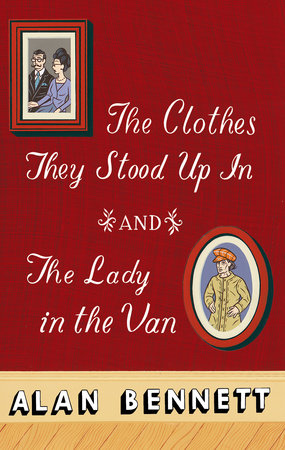 1. In The Clothes They Stood Up In, Mr. Ransome is described as a solicitor (that is, a lawyer) who “thought words mattered.” How would you describe Mr. Ransome’s character? In what ways is he different from his wife? What would it be like to spend an evening with this couple?

2. The Ransomes are the victims of a rather peculiar burglary: the burglars steal everything from their apartment, right down to the toiler-paper roll in the bathroom. Mrs. Ransome discovers later that “everyone, it seemed, had their own burglar story.” Do you have a burglar story?

3. Describe the social environment of London as it’s laid out in The Clothes They Stood Up In. What changes does Mrs. Ransome notice as she walks around her neighborhood after the burglary? What had been preventing her from registering these changes before? Do you think she would ever have stepped into Mr. Anwar’s grocery shop had not extreme necessity required it of her?

4. Mrs. Ransome comes to feel that the burglary, far from depriving her, has actually liberated her, since “it was everything they had in the world, she felt, that had been holding her back.” In what ways were the Ransomes’ belongings holding her back? Would you say it was her belongings, or something else, that was preventing Mrs. Ransome from trying new things?

5. During the course of the story, Mr. and Mrs. Ransome are visited by various minor characters, such as the detective and constable, and Dusty, the worker from social services. How would you describe the role of these characters? Bennett sketches each with very few words, yet the characters seem remarkably lifelike. What tools does he use to create such lifelike figures?

6. Lying in bed one night, Mrs. Ransome reflects that “not the least of what they had lost in the burglary were their little marital deceptions.” What prompts her to think this? To what extent do you think “marital deceptions” are a part of a successful marriage? To what extent do you think these deceptions may be unhealthy? How would Mr. Ransome answer these same questions, if he were indeed capable of answering them?

7. Do you consider Mrs. Ransome the hero of the story? Why or why not?

8. Critics have called The Clothes They Stood Up In a parable. Do you agree with this assessment? If so, what is the parable about? What sort of a moral lesson does the novel offer? Do you agree with this moral? (You might also consider the significance of the Ransomes’ name as it relates to the story’s moral.)

10. Alan Bennett is best known in England for his plays, which include The Madness of George III. Even if you were unaware of Bennett’s playwriting, what aspects of his fiction suggest to you his skill as a dramatist? You might consider his use of dialogue, the construction of his scenes, and his repertory of characters. What might a theater or film adaptation of The Clothes They Stood Up In look like? Which actors do you think might play the parts of Mr. and Mrs. Ransome?

11. The Random House Trade Paperback edition of The Clothes They Stood Up In also includes Bennett’s famous nonfiction essay The Lady in the Van, in which he describes his complicated relationship with a homeless woman who camps out on his property in a battered old van. What makes his relationship with Miss Shepherd so complicated? How would you describe their relationship? Would you say they were friends?

12. In describing the process of gentrification that took place in London in the late 1960s, Bennett acknowledges that “there was a gap between our social position and our social obligation. It was in this gap that Miss Shepherd (in her van) was able to live.” What does Bennett mean when he writes of “a gap”? He writes that this gap does not exist for today’s gentrifiers. Do you agree with this statement? What consequences of gentrification have you witnessed in your own neighborhood or city? Do you think a person like Miss Shepherd would be able to exist today?

Big Sur
Back to Top