The Lady of the Sea Reader’s Guide 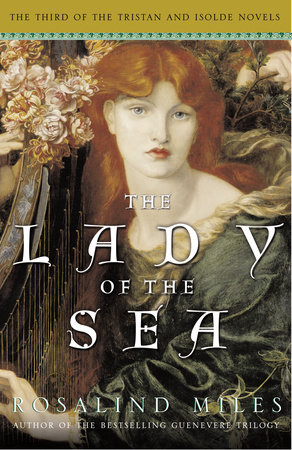 The Lady of the Sea Reader’s Guide

print
The Lady of the Sea Reader’s Guide

Tristan and Isolde, star-crossed lovers in the time of King Arthur, have been celebrated in poetry, song and legend throughout the ages. In her stunning new trilogy, Rosalind Miles—bestselling author of the dazzling Guenevere series—sets the fated duo in a dynamic, freshly imagined epic of conquest, betrayal and desire. Book One introduced the intoxicating Isolde, renowned healer and princess, and Tristan, her powerful yet tender-hearted knight, as their all-consuming love blossomed against a backdrop of international war and court scandal. Book Two saw Isolde crowned Queen of Ireland and besieged by foes determined to undermine her power, while Tristan journeyed to the edge of madness in his quest to reunite with his one true love. Now, in the trilogy’s heartstopping finale, Isolde confronts deadly invaders who threaten Ireland’s autonomy, even as she and Tristan plan an act of revolt that will win them their long-overdue freedom—but may cost them their lives. This guide is designed to help direct your reading group’s discussion of master storyteller Rosalind Miles’s breathtaking The Lady of the Sea.

Thoroughly disgusted with her 20-year political marriage to Mark of Cornwall, Isolde returns to her beloved Ireland for good, only to find its shores terrorized by warring Picti from the north. At their head is Darath, a fierce young king whose taste for blood swiftly becomes a taste for flesh when he meets the mesmerizing Isolde and determines to make her his bride—an offer that tantalizes Isolde more than she cares to admit.

Meanwhile, (mis)guided by ruthless Christian counselors whose delight is the downfall of the Mother-right, Mark becomes convinced that impregnating his reluctant wife is the key to Cornwall’s future. But when Tristan and Isolde make their illicit love affair impossible to ignore, Mark unleashes a rage that threatens to kill them both. Only the Lady of the Sea and her fathomless compassion can save the imperiled couple as they journey toward their awesome fate.

1. How does the relationship between Merlin and the Lady of the Sea frame the novel? Does their discourse read as power struggle or love affair? Ultimately, these two mighty forces have the same goals. Why, then, is Merlin open to the whims of the Christians while the Lady is vehemently not?

2. At a certain point in the novel, Mark shifts from being a weak, impressionable, almost comical character, to being a terrifying, truly dark-hearted menace. What causes this change? How does the author build tension around Mark’s transformation?

3. Knowing all that he does about Mark, why does Tristan cling to his fealty to the rascally monarch? Does his resistance to Isoldes’s plan to abandon Cornwall stem from chivalry, or fear?

4. How does the author weave comedy into the relationship between Dominian and Arraganzo?

5. Isolde is well-schooled in the ways of the Mother-right and the fact that, as Queen, she is entitled to a “chosen one” whenever she wants and however many times she wants. Why, then, is she desperate for Cormac’s approval of her leaving Mark? What link to her past does Cormac represent?

6. Tristan suffers from a crippling lack of faith in Isolde’s opinion of him. He worries that if she accidentally dies in the woods, “she would have thought of him as a faithless man. If he never again contacted her after that, she would be sure he was a recreant knight who had broken his oath to them both, and simply slipped away to find an easier life.” Is there any basis for this fear? Is Isolde aware of his fragile grip on trust?

7. Darath presents two faces: one, a man hopelessly in love, who defies his own war ethics in the pursuit of Isolde; and two, a man who would happily slaughter Isolde after bedding her and winning her lands. Which one do you believe?

8. Why does Andred join Arraganzo and Dominion in encouraging Mark to marry one of the Dun Haven princesses, if his ultimate plot is to be named sole heir to the throne?

9. What is the source of Merlin’s obsession with “Tristan—Arthur—all these sorrowful lost boys. Motherless, fatherless, nameless, and homeless, too, flying boys becoming wounded men”? Is Merlin successful at helping these hapless boys?

10. Where does the author harness natural phenomena like the weather as a storytelling device? How does this contribute to the mood of the novel?

11. Tristan and Isolde agree to return to Castle Dore with the intention to “make a clean and honorable break with the past, then afterward we can live as we want.” Why are they suddenly naïve about Mark’s capacity for justice? Do they honestly believe they’ll sway the king, or are they trying to assuage their own sense of guilt? Are they doing the right thing?

12. How does the theme of abandonment play out in the characters of Dominian, Gawaine, and Igraine?

13. How do townfolk help Gawaine solve the riddle of Tristan and Isolde’s so-called deaths? Why does his well-intentioned visit to them spell disaster?

14. Dominian is charged with helping to oust the “pagan” Isolde from the throne of Cornwall. Why, then, does he challenge Isolde’s assertion that her marriage to Mark is null and void?

15. How is Isolde’s mother’s curse—“May all those he loves, and all who ever love him, suffer until the sea kisses the sky, and the trees bow down their heads at his cursed feet!”—fulfilled, while leaving Tristan and Isolde unscathed?

Rosalind Miles, Ph.D., is the author of 16 books, including the bestselling Guenevere Trilogy and the pop feminist classic, Who Cooked the Last Supper? Dr. Miles holds degrees from Cambridge University and the Universities of Leicester and Birmingham, and is a sought-after lecturer, essayist and broadcaster. She lives in Kent, England and Los Angeles, California.
Learn More About The Lady of the Sea
print

The Child of the Holy Grail
Rosalind Miles

The Knight of the Sacred Lake
Rosalind Miles

The Unfortunate Traveller and Other Works
Thomas Nashe

Aladdin and Other Tales from the Arabian Nights
Anonymous and W. Heath Robinson

The Last Sacrifice
James A. Moore

The Female Quixote
Charlotte Lennox
Back to Top