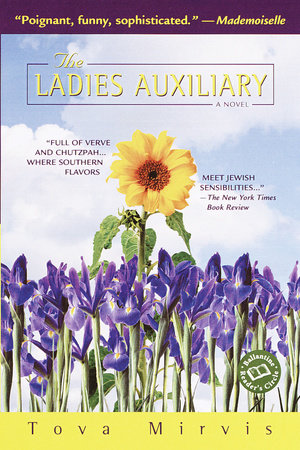 "Appealing–Batsheva flourishes as an effective character, full of verve and chutzpah, like an Ellen Gildchrist heroine whose iconoclasm, unremarkable by cosmopolitan standards, takes on bright colors in conventional society."
—The New York Times Book Review

"[A] lyric debut novel–Mirvis’ storytelling is superb."
—The Balitmore Sun

"A debut that details, with wisdom and grace, the inevitable tensions between the comfort of community and the need for individual freedom."
—Kirkus Reviews

"A semi-allegorical tale of the small Orthodox Jewish community of Memphis (yes–Tennessee), which Mirvis evokes with compassion and telling detail."
—Detroit Free Press

"Generous with humor and compassion, Mirvis paints tenderly nuanced portraits of strong female characters while scrutinizing an entrenched religious subculture whose traditions are threatened by modern temptations–A gentle story that captures its milieu with tolerant understanding, and plucks the heartstrings."–Publishers Weekly

"Compassionate and perceptive–The triumph of the book is its portrayal of these women, whose community is a treasure of tradition and moral values–.This book is not just for Jewish audiences–Mirvis has written a book that poses poignant questions even as it acknowledges that there may be no answers to them."
—USA Today

1. The novel opens with an almost pastoral description of Memphis’s Jewish neighborhood, typologically evoking a "city on the hill" image. How do the themes that imbue this first scene set the tone for the rest of the book?

2. Find a passage in which a Jewish ceremony is described. In what ways does Mirvis show the myriad, even contradictory, meanings that it contains for each of its participants?

3. The use of the first-person plural pronoun for the narrative voice emphasizes the collective, uniform nature of the community. The story is told not by any one member of the community but by a chorus. How does Mirvis play with this voice to emphasize moments of dissension or doubt? At what points is the voice the least omniscient?

4. What did you make of the seeming role reversal between mothers and daughters, with the mothers portrayed as naïve and the daughters as more perceptive and worldly?

5. What do you think will happen after the end of the novel? Will Batsheva stay? To what extent will she be integrated, if at all?

6. How do you imagine Ayala to be five or ten years after the end of the novel?

7. This book, with its independent, proud heroine, could be read alongside Nathaniel Hawthorne’s The Scarlet Letter (even down to the strange apparitions in the sky). How do they both explore issues of tradition, tolerance, belief, individuality, and forgiveness? In what important ways do they diverge?

8. What characters did you identify with most? Was it always Batsheva?

9. Do you think Yosef’s doubt about Judaism predated Batsheva’s arrival? Or did it grow out of their conversations?

10. Was there ever a point where you agreed with those who thought that Batsheva had "crossed the line"?

11. How and where does Mirvis blur the division between religious faith and small-town provincialism?

12. Do you think it is possible to carve out a space for individualism within an orthodoxy? Is what Batsheva attempts even possible or, in the end, do you have to choose one over the other? (Perhaps think of other stories–Voltaire’s Candide, Mark Twain’s The Adventures of Huckleberry Finn, Henry James’s Daisy Miller–in which someone presents a challenge to an established order.).

13. What do you make of the vision in the sky that ends the novel? How can it be read along with the opening scene of the novel?

TOVA MIRVIS grew up in Memphis, Tennessee. She received a Masters of Fine Arts in creative writing from the Columbia University School of the Arts. She currently lives in New York City with her husband and son.
Learn More About The Ladies Auxiliary
print

Miracle Beach
Back to Top