The Last Day of the War Reader’s Guide 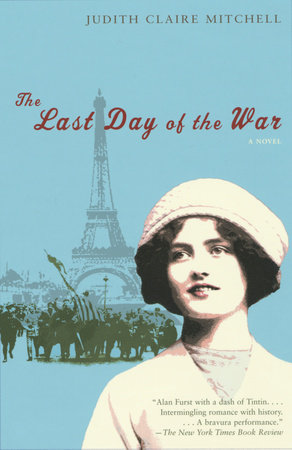 The Last Day of the War Reader’s Guide

print
The Last Day of the War Reader’s Guide

“Alan Furst with a dash of Tintin. . . . Intermingling romance with history. . . . A bravura performance.” —The New York Times Book Review

The introduction, discussion questions, suggestions for further reading, and author biography that follow are intended to enhance your discussion of The Last Day of the War—an engrossing and exciting story of the love between a Jewish girl from St. Louis and an Armenian-American soldier, set in Paris at the end of World War I.

Eighteen-year-old Yael Weiss reinvents herself as Yale White to work in the YMCA soldiers’ canteens in Paris. Dub Hagopian is the soldier she barely knows whom she follows across the Atlantic. He is also the patriotic child of immigrants living in Providence and a member of Erinyes, an underground organization dedicated to avenging the 1915 Armenian massacres. Filled with passion, energy, and youthful idealism, Yale and Dub find themselves caught up in the excitement surrounding the Paris Peace Conference. In the final days of the war, they end up living in a château outside of Paris and aiding in concocting and carrying out a secret plan. Over the course of a few months, Yale becomes as devoted to Dub’s cause as she is to him.

1. Describe the structure of The Last Day of the War. Why has Mitchell divided her book into nine parts, three set in the United States and six in Paris? How does she incorporate flashbacks into the chronological narrative to give the history of the characters? Discuss the various names of the chapters; what part do they play in the structure? What is the effect of the structure—the way the story is told—on you as a reader?

2. How has her Jewish and Midwestern background influenced Yale and her decisions? Is she at odds with her Jewish identity? Why does Yale feel compelled to lie about her age, religion, and name? How is she able to convince others of her masquerade?

3. The Last Day of the War is in many ways a coming-of-age story. How does Yale change over the course of one year, from the day she steals a suit on her eighteenth birthday to the Paris Peace Conference ending World War I? What has she learned and how has she matured in this year?

4. What meaning does Paris have for both Yale and Dub? How are they liberated and/or confined in Paris? What does each of them do in Paris that they would not have been able to do in the States?

5. At the end of the novel, Shushan declares: “He [Dub] could be any American boy” [p. 353]. Do you agree? In what way are Yale and Dub outsiders? And how are they both essentially and ultimately American?

7. How has Dub’s Armenian immigrant experience in Providence influenced him? Can he ever separate himself from this identity of the Armenian-American immigrant and from the Armenian collective memory? How is it both liberating and burdensome for Dub?

8. Describe Yale’s friendship with Mary Brennan White. What do they share with and learn from each other? Does the presence of Dub and his Armenian friends strengthen or weaken their friendship? How have they both discovered themselves through the friendship?

10. Discuss the purpose and role of Aram Kazarian and his wife in the novel. What do they represent to Dub and his friends? What about their château? Describe it and its importance in the novel not only as a safe haven from the chaotic world, but as an emotional hold on the characters. How does the outside world eventually sneak in?

11. Why does Amo Winston, the forty-year-old YMCA matron, pick on Yale and Brennan? What do they represent for her? How do they feel about her? How and why does their relationship change over the course of the novel?

12. Discuss the theme of revenge in the novel. Who wants revenge and why? Can anyone be innocent in war? What does Kerim Bey represent for Dub and Raffi? Discuss the plan to assassinate him and what its outcome reveals about Dub and Raffi and their relationship.

13. What role do lying and deception play in this novel?

14. Discuss the importance of names in the novel—Yael Weiss/Yale White, Dub Hagopian, Mary Brennan White, Shushan; and others. What do their names reveal about the various characters?

15. The Last Day of the War is a historical novel. What did you learn about World War I and the early twentieth century by reading this novel? How much did you know about the Armenian massacres before reading the book?

16. What is the significance of the title, The Last Day of the War?

Judith Mitchell is a graduate of the Iowa Writers’ Workshop and a recipient of a James Michener/Copernicus Society of America Fellowship. She currently teaches creative writing at the University of Wisconsin and lives in Madison.

The Discovery of Heaven
Harry Mulisch

I Should Be Extremely Happy in Your Company
Brian Hall

In Our Strange Gardens
Michel Quint

A Room with a View and Howard’s End
E.M. Forster

The Pursuit of Love; Love in a Cold Climate
Nancy Mitford

The Twin
Gerband Bakker
Back to Top