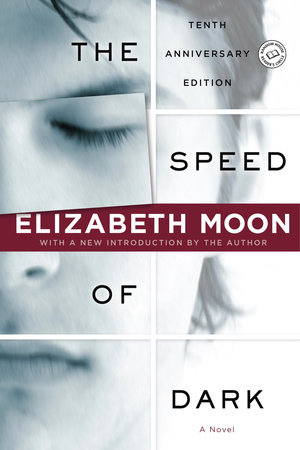 1. Why do you think Elizabeth Moon titled her novel The Speed of Dark?

2. Is The Speed of Dark a typical science fiction novel? Is it a science
fiction novel at all? Why or why not?

3. Lou Arrendale is the novel’s main character, and most of its events are
related in his voice, through his eyes. Yet sometimes Moon depicts events
through the eyes of other characters, such as Tom and Pete Aldrin.
Discuss why the author might have decided to write this story from more
than one point of view. Do you think it was the right decision?

4. In the accompanying interview, Elizabeth Moon states that she wanted
to avoid demonizing autism in her presentation of Lou and his fellow
autists. Does she succeed? Does she go too far in the opposite direction
and romanticize it?

5. What is it about damaged characters like Lou that makes them so
fascinating to read about? What other novels can you think of that
feature main characters or narrators who are damaged or in some way
“non-normal”?

6. Compare the author’s portrayal of characters like Mr. Crenshaw and
Don to that of Lou. Are their portraits drawn with equal depth and
believability? Why do you suppose the author might have chosen to
depict some characters more realistically than others? What effect, if any,
did this have on your enjoyment of the novel?

7. In what ways is Lou’s autism a disadvantage in his daily life? Does it
confer any advantages?

8. What does it mean to the various characters in the book to be normal?
How do Lou’s ideas of normalcy compare to those of Crenshaw? Of
Don? Of Tom and Lucia?

9. How did reading The Speed of Dark change your own concept of what
it means to be normal?

10. What reason does Lou’s company give for wanting him and his
fellow autists to undergo the experimental treatment? Are they being
truthful, or is there some other reason?

11. Does Lou decide to try the experimental treatment because he
believes what the company has told him, or for reasons of his own? If the
latter, what are those reasons, and do you find them believable? Do you
think he makes the right decision? Discuss in terms of the reading from
the book of John that Lou hears at church, about the man lying by the
healing pool in Siloam.

12. Do you agree or disagree with Crenshaw’s contention that Lou and
the other autists are a drain on the company and that their “perks” are
unfair to “normal” employees? In your opinion, are special needs
employees, whether autists or those with other mental or physical
disabilities, given too many workplace advantages under current law?

13. What do you think accounts for the personal hostility toward Lou
displayed by characters like Crenshaw and Don? At any point in your
reading, did you find yourself taking their side? Why?

14. Why, despite his sensitivity to patterns, does Lou have such difficulty
accepting the possibility that Don may be the one behind the vandalism
of his car? Once Don is arrested, why does Lou have misgivings about
filing a complaint against him?

15. Given what is revealed of Marjory’s personality and history, do you
think she is genuinely attracted to Lou?

16. One of Lou’s biggest difficulties is interpreting the motivations of
other people. Yet this is something almost every reader can relate to.
Similarly, many readers can identify with other aspects of Lou’s character
and behavior: his appreciation of music or his sensitivity to patterns, for
example. Were there any facets of his character that you found totally
alien to your own experience of living in and perceiving the world?

17. One reviewer called the ending of The Speed of Dark “chilling.”
Another termed it a “cop-out.” What’s your verdict? Has Lou achieved
his dream of becoming an astronaut, as it seems? What price has he paid?
Is he still the same person he was before the treatment? If not, how has
he changed? What has been gained? What has been lost?

18. The treatment offered to Lou features a combination of genetic
engineering and nanotechnology, two of the hottest areas of scientific
research today. Some diseases and conditions are already being treated
with gene therapies, and scientists expect that more will soon follow. The
prospect of cures for such scourges as cancer, Alzheimer’s disease, and
autism is exciting. But what about genetic therapies to raise IQ or
program developing fetuses for certain physical, mental, and emotional
traits? Are we moving too fast into this brave new world? Have we taken
sufficient account of the dangers and ethical considerations? Do human
beings have a right to tamper with nature in this way? Where would you
draw the line?

19. If you were offered an experimental drug to improve your IQ or
some area of your mental or physical functioning, but with a possibility
that you would no longer be the same person, would you try it? What if
it were offered by your employer and tied to a higher salary or better
benefits package?

20. Imagine that you and the members of your reading group are highfunctioning
autists like Lou and the others. Now go back and discuss one
of the previous questions from this new perspective, based on behaviors
and ways of thinking presented in the novel.

Learn More About The Speed of Dark
print

He, She and It
Marge Piercy

After On
Rob Reid

The Devil in Silver
Victor LaValle

Ring
Koji Suzuki
Back to Top