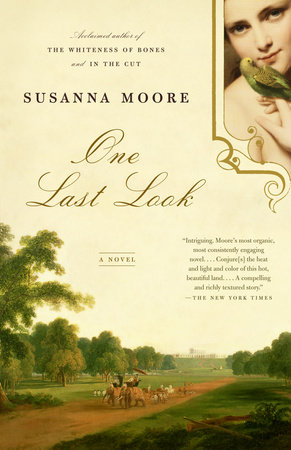 “Intriguing. Moore’s most organic, most consistently engaging novel . . . conjure[s] the heat and light and color of this hot, beautiful land. . . . A compelling and richly textured story.” –The New York Times

Written in the form of diary entries and spanning the years 1836—1843, One Last Look tells the story of Lady Eleanor, her sister Harriet, and her brother Henry, as they plunge into the utterly un-British world of India. Henry, the newly appointed Governor-General of the colony, hopes to make his fortune there. But for his sisters, living in India turns out to be a rich, strange, and spiritually disturbing experience, one that will forever alter the course of their inner lives.

As Eleanor records her impressions of India in her diary, she begins to question her sense of things, of how life is and ought to be, and an inner transformation begins. At first, she feels inured to the suffering and poverty she sees around her. Isolated in the Government House, she writes: “We are here as conquerors and we are not inclined to let them forget it. I feel like a jack-in-the-box” [p. 25]. When she sees the poor squatting naked before their huts, she feels only disgust. But being in India allows her to see, for the first time, the class snobbery, racism, and hypocrisy of her fellow Englishmen and women. And after a time, she comes to feel the full mystery and sacredness of India, where “it is the land itself that is the god” [p. 262]. Her sister Harriet embraces life in India with abandon, reveling in snake charmers and the hookah, having an unacceptable friendship with one of her Indian servants, and proclaiming, after sleeping in a tent for weeks on their journey to Delhi, that she will never live in a house again. By the end of their stay in India, Eleanor and Harriet come to see the hollowness beneath the pious justifications of British colonialism. Eleanor writes: “I see now that a mission is a most practical way of justifying conquest” [p. 280].

A work of great emotional depth and honesty, One Last Look is also a powerful historical novel and a profoundly relevant political story about the dangers of imperialism, then and now.

1. What is the effect of telling the story through Eleanor’s diary entries? How would the novel have been different if it had employed a more conventional narration?

2. Early in the novel, Eleanor wonders “if generations of privilege have conspired to inure me to this place; I see all the naked creatures squatting at the doors of their huts and feel nothing but disgust” [p. 29]. Why would her privilege prevent her from feeling compassion for these “creatures”? How does her attitude toward the suffering and poverty of India change over the course of her time there?

3. “I have thought from time to time in my life as to what it means to be female,” Eleanor writes, “but never before did I consider what it signifies to be English; now I think of it endlessly” [p. 87]. Why does being in India make her so conscious of her Englishness? How does it change her view of England and English imperialism?

4. Bishop Maxwell-Lewis asks Eleanor if she believes in the three C’s: Commerce, Christianity, and Civilization. In what ways have the British used these concepts to justify their domination of India?

5. Eleanor and Henry think that Harriet has “gone all jungly” [p. 81]. What do they mean by this? How is Harriet’s response to India deeper and more intimate than theirs? Why is she so enchanted by the jungle? How does living in the jungle change her view of English civilization, its comforts and moral restrictions?

6. What kind of relationship does Eleanor have with her brother Henry? Why is she so attached to him? How are we to understand the sexual dimension of their relationship?

7. What are the specific motives for Henry and Lafayette coming to India? How are their plans complicated and frustrated by the reality they encounter there?

8. Eleanor wonders, “The writing of women is always read in the hope of discovering women’s secrets. Will my secrets be discovered?” [p. 239]. Is it true that women’s writing is read with this purpose? Why would that be so? Has Eleanor revealed her secrets in her writing? Is reading another person’s diaries always an act of voyeurism?

9. As she prepares to leave India, Eleanor tells the Bishop: “I myself can no longer distinguish between what is real and what is chimera, yet this feeling that I have, this elation of toiling through isolation and wonder, will soon be gone and I will mourn for the rest of my life its going!” [p. 277]. Why has her experience in India made it impossible for Eleanor to tell dream and reality apart? Why does she feel she will mourn its loss for the rest of her life?

10. Is One Last Look primarily a personal or a political novel? How does Susanna Moore balance these aspects of the book?

11. One Last Look is set in India in the 1830s. In what ways does it speak to our own time and circumstance? Can the novel be read as a cautionary tale about feeling superior to and exploiting other cultures? How relevant is the British overthrow of the Afghan leader Dost Mohammed in the novel to the current situation in Afghanistan and Iraq?

12. At the end of the novel, Eleanor tells Harriet: “I am so thankful for all that has happened, not least because it has cured me of almost everything I once believed” [p. 286]. What beliefs has Eleanor been cured of? How has her experience in India fundamentally changed her? How is she a different person when she returns to England?

Susanna Moore is the author of the novels In the Cut, The Whiteness of Bones, Sleeping Beauties, and My Old Sweetheart, and a book of nonfiction, I Myself Have Seen It. She lives in New York City.

The Jewel in the Crown
Paul Scott

The Garden of Ruth
Eva Etzioni-Halevy

When I Lived in Modern Times
Linda Grant