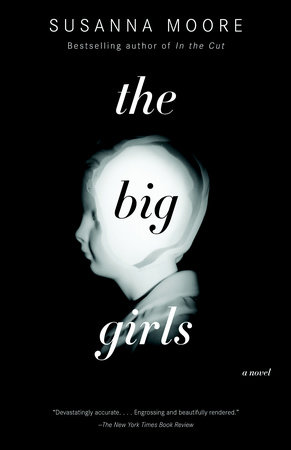 The introduction, discussion questions, and suggestions for further reading that follow are designed to stimulate your group’s discussion of The Big Girls, Susanna Moore’s emotionally and psychologically complex new novel set inside a women’s prison.

Susanna Moore’s The Big Girls takes readers inside the Sloatsburg Correctional Institution. More particularly, it takes readers into the minds of Louise Forrest, a staff psychiatrist, and Helen, an inmate serving a life sentence for the murder of her two small children.

The Big Girls is told through the alternating narrative voices of Louise, Helen, correctional officer Ike Bradshaw, and actress Angie Mills. As the novel begins, an overwhelmed Louise must remind herself that she is a physician, the mother of an eight-year-old boy, and not an inmate: “I have not embezzled the Ladies’ Garment Workers’ pension fund or killed my common-law husband with a George Foreman Grill.” Nor has she, like Helen, killed her two small children at the behest of terrifying voices, the “Messengers” who crash violently into Helen’s consciousness. But Louise, in part because she feels a frightening connection with the women she treats, develops an emotionally intense relationship with Helen. Readers are left to wonder what other reasons might lie behind Louise’s closeness with Helen and whether or not that closeness is healing or dangerously inappropriate. As the details of Helen’s abusive past are revealed—through the contrasting lenses of Helen’s and Louise’s narrations—Louise begins to feel more compassion not only for Helen but for all the prisoners. She even wonders what she herself might have done had she been subjected to the horrors some of these women have suffered. Would she have committed murder? This blurring of the line between doctor and inmate—and between Louise’s personal and professional lives—is one of the novel’s most compelling themes.

Indeed, the surprising connections between the novel’s main characters—Helen’s relationship to the Hollywood starlet Angie, who is Louise’s ex-husband’s lover; Louise’s affair with correctional officer Ike Bradshaw, who her son accuses of sexual abuse—suggest that lives which seem wildly separate are in fact closely interlinked.

Written in pitch-perfect prose, The Big Girls is an unflinching exploration of psychosis, of the chaos of family life, and the terror of child abuse and its consequences. It takes readers to places where none might wish to go, and in doing so, offers an understanding of the darker sides of human nature.

1. The Big Girls has four alternating narrators—Louise Forrest, Helen, Captain Ike Bradshaw, and Angie Mills. Why would Susanna Moore choose to tell the story from four distinctive and subjective points of view? How does this multi-vocal narration affect the reader’s relationship to the novel? What is the advantage of letting the characters speak for themselves?

2. Why has Louise chosen a job at the Sloatsburg Correctional Institution over a more lucrative and comfortable Park Avenue private practice? Does she fully understand her motives for doing so?

3. How does Moore manage to make Helen, a woman who has murdered her two young children, such a sympathetic character? What is it about Helen that elicits such care and compassion from Louise? Is she a tragic figure?

4. Louise says of her training “I’d been trained to believe in pathological models: bad parents make bad people who can be treated with lots of drugs. I saw symptoms and behavior in an a-contextual model. I was not particularly tolerant. I’d like to say that my breakdown was the beginning of my training in compassion, but that would not be the truth. That training has begun only recently” [p. 43]. In what ways does Louise’s understanding of and compassion for her patients deepen over the course of the novel? In what ways is the a-contextual “pathological model” an inadequate response to the real lives of the women at Sloatsburg?

5. Near the end of the novel, Louise admits that she believes in the existence of evil. “Satan does not roam happily along Park Avenue in a form that is physically threatening, or even visible, but since coming to this place, I have seen evil. I don’t think that it is a force in the world that is arbitrary and random, or that it is subjective or specific, or the consequence of sin, but it’s here all the same” [p. 204]. Why does Louise come to believe in evil? Does the existence of evil help explain the crimes that are both inflicted on and committed by the women at Sloatsburg?

7. Louise says, “No matter how much I learn, no matter how instinctively sympathetic I am toward the women, and how deeply I still yearn to understand, I know less and less. I’m gullible. I’m condescending. Impatient. The encouragement of alternatives exhausts me. I’ve failed with Helen. I’ve failed with my son” [p. 194]. Is this an accurate or an unduly harsh self-assessment? Has Louise failed with Helen and with her son? Has she unwittingly contributed to Helen’s suicide?

8. In what ways does the boundary between Louise’s personal and professional life begin to blur over the course of the novel? What is the irony in her own son’s accusation that Ike Bradshaw has abused him?

9. What does The Big Girls suggest about family life in America today?

10. Louise observes that the relationships between attacker and victim are often the most intimate. Why would this be? Does the novel help readers understand why women murder their children or their husbands? What causes does it suggest for these brutal crimes? Are these women driven to violence for different reasons than men are?

12. In what ways are Angie, Ike Bradshaw, and Rafael important to the novel? How do they help clarify the novel’s main concerns?

13. When Louise sees a “grotesque symmetry” in the fact that Helen’s imagined sister Angie, is her ex-husband’s lover, she says she may have to “change [her] mind about coincidence” [p. 209]. What is the significance of these “coincidences”? Why is the symmetry “grotesque”?

14. Louise says of Helen: “The tension between her conscious self and the self that she has so long kept hidden is so delicate that I am frightened for her. I always knew how dangerous knowledge would be to her, but must I still hold to the belief that her ignorance is equally dangerous?” [p. 133]. Does increasing Helen’s consciousness of her own experience help or hurt her? Does she attain a measure of peace before her death?

Susanna Moore is the author of the novels One Last Look, In the Cut, Sleeping Beauties, The Whiteness of Bones, and My Old Sweetheart, and a book of nonfiction, I Myself Have Seen It. She lives in New York City.

Lies of the Heart
Michelle Boyajian

On the Yard
Malcolm Braly

The End of the Night
John D. MacDonald

Why the Tree Loves the Ax
Jim Lewis

Death of a Murderer
Rupert Thomson

Terminal
Robin Cook
Back to Top