The Other Wes Moore Reader’s Guide 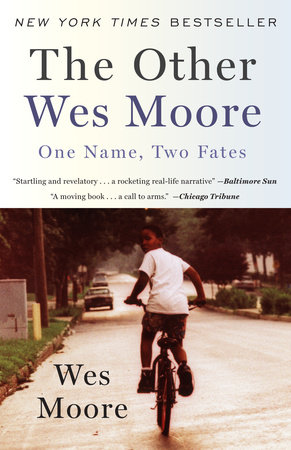 The Other Wes Moore Reader’s Guide

1. The author says to the other Wes, “I guess it’s hard sometimes todistinguish between second chances and last chances.” What do you think he means? What is each Wes’s “last chance”? Discuss the differences in how each one uses that chance and why they make the decisions they do.

2. During their youth, Wes and Wes spend most of their time in crime- ridden Baltimore and the Bronx. How important was that environment in shaping their stories and personalities?

3. Why do you think the incarcerated Wes continues to proclaim his innocence regarding his role in the crime for which he was convicted?

4. The book begins with Wes and Wes’s discussion of their fathers. What role do you think fatherhood plays in the lives of these men? How do the absence of their fathers and the differences in the reasons for their absences affect them?

5. Wes dedicates the book to “the women who helped shape [his] journey to manhood.” Discuss the way women are seen in Wes’s community. What impact do they have on their sons?

7. Throughout the book, the author sometimes expresses confusion at his own motivations. Why do you think he is so driven to understand the other Wes’s life?

8. The author attributes Wes’s eventual incarceration to shortsightedness, an inability to critically think about the future. Do you agree?

9. Wes states that people often live up to the expectations projected on them. Is that true? If someone you care for expects you to succeed—or fail—will you? Where does personal accountability come into play?

10. Discuss the relationship between education and poverty. In your discussion, consider the education levels of both Weses’ mothers, how far each man got in his education, the opportunities they gained or lost as a result of their education, and their reasons for continuing or discontinuing their studies.

11. The book begins with a scene in which the author is reprimanded for hitting his sister. Why is it important for conflicts to be solved hrough means other than violence? In what way do the Weses differ in their approaches to physical confrontations, and why?

12. Why is the idea of “going straight” so unappealing to the incarcerated Wes and his peers? What does it mean for our culture to have such a large population living and working outside the boundaries of the law?

Learn More About The Other Wes Moore
print

The Audacity of Hope
Barack Obama

I Am Not Your Negro
Velvet Films, Inc., Raoul Peck and James Baldwin

Persepolis
Marjane Satrapi
Back to Top