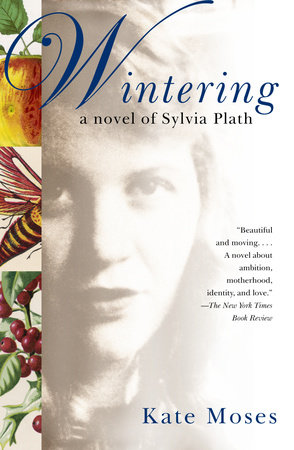 The introduction, discussion questions, suggested reading list, and author biography that follow are intended to enhance your group’s reading of Kate Moses’s Wintering: A Novel of Sylvia Plath.

Wintering is the story of a woman forging a new life for herself after her marriage has foundered. She shuts up her beloved Devonshire house and makes a home for her two young children in London, elated at completing the collection of poems she foresees will make her name. It is also the story of a woman struggling to maintain her mental equilibrium, to absorb the pain of her husband’s betrayal, and to resist her mother’s engulfing love. It is the story of Sylvia Plath.

In this deeply felt novel, Kate Moses re-creates Sylvia Plath’s last months, weaving together the background of her life before she met Ted Hughes with the disintegration of their relationship and the burst of creativity this triggered. It is inspired by Plath’s original ordering and selection of the poems in Ariel—which begins with the word “love” and ends with “spring”—a mythic narrative of defiant survival quite different from the chronological version edited by Hughes. At Wintering’s heart, though, lie the two weeks in December 1962 when Plath finds herself still alone and grief-stricken, despite all her determined hope. With exceptional empathy and lyrical grace, Moses captures her poignant and courageous struggle to confront not only her future as a woman, an artist, and a mother, but also the unbanished demons of her past.

1. A novel about an actual historical figure is different from most works of fiction. Moses says that she has invented “characters’ thoughts and conversations and the fictional particulars attributed to real events otherwise known only in sketchy detail” [Author’s Note, p. 286]. In her book about Plath, Janet Malcolm states, “In a work of nonfiction we almost never know the truth of what happened. The ideal of unmediated reporting is regularly achieved only in fiction, where the writer faithfully reports on what is going on in his imagination” [The Silent Woman, p. 155]. What questions do these two statements raise about the relationship of fiction to fact, especially as it relates to the experience of reading Wintering?

2. Is Wintering meant to stand alone as a novel, or is it meant to be read in necessary relation to Plath’s poetry, her journals, her biographies, etc.? What prior knowledge of the subject, if any, does the novel presuppose on the part of the reader?

3. On page 135 Plath thinks, “What had she gained by Ted’s leaving but her voice? What did she do now but listen to the beat of her own words, feel them and hear them as they formed—audacious, supple, ruthless, dazzling—in her mouth? . . . Her poems were lifting off the page. They hung in the air like a risen soul.” Does it seem true that the breakup of her marriage, with all its grief and anger, was the precipitating cause of Plath’s extraordinary breakthrough? If so, what does this suggest about the nature of her gift?

4. Kate Moses has designed her novel to coordinate chapter by chapter with the sequence of poems that Plath planned for Ariel. How does reading each poem with its corresponding chapter of Wintering affect the reading experience? What ideas, images, and emotions connect the poems with the chapters that share their titles? (See note about Ariel below.)

5. Critic George Steiner has said of the poems of Ariel, “Sylvia Plath’s poems have already passed into legend as both representative of our present tone of emotional life and unique in their implacable, harsh brilliance. . . . These poems take tremendous risks, extending Sylvia Plath’s essentially austere manner to the very limit. They are a bitter triumph. . . . She could not return from them.” Does the novel show Plath in a state of suicidal despair? Do you think her suicide was inevitable? Do you think Plath thought that was the only course of action available to her?

6. What does Court Green symbolize for Plath, with its ancient grounds, daffodils, and apple trees? In the chapter called “Barren Woman,” how does Plath compare herself with Assia Wevill, who has come to visit in Devon? What is the meaning of Assia’s dream, narrated on page 62? How do this chapter and the previous one create a sense of foreboding?

7. Wintering is an imaginative reconstruction of Sylvia Plath’s life during a time of extreme stress and creativity; her journals from this period were destroyed by Ted Hughes. Given this fact, does Wintering stand as a useful, even necessary attempt to re-create the aspects of Plath’s experience now lost from the historical record?

8. What happens to Plath in the cathedral? What does the light remind her of [pp. 75–76]? How does her confrontation with her mother help to explain the psychological pressures she is under? What are the juxtapositions that make the chapter titled “Lady Lazarus” so powerful?

9. How does the novel represent the life and marriage of two poets? How does Moses convey the intensity of the imaginative life and what poets need in order for their writing to thrive, as well as the danger of competition between them?

10. Many of the twentieth century’s major women writers—Virginia Woolf, Elizabeth Bishop, Marianne Moore, Gertrude Stein—had no children. Yet for Plath, Moses writes, “the existential act of giving birth to her child, a complete and
separate being—she could see, [was] nothing but the beginning of her real existence. . . . She would never do anything else to touch it, this ineffable transforming act [pp. 9–10]. How does Plath’s motherhood reverberate through the novel, and how does it affect her work as a poet?

11. Comment on the novel’s structure, particularly on Moses’s practice of dating each chapter. Why might Moses have decided to end the novel on December 29, 1962, rather than on February 11, 1963, the day of Plath’s death? What is the tone of the final chapter?

12. Anne Stevenson, one of Plath’s biographers, writes that Wintering is “an admirably just and unexaggerated work of psychological empathy. . . . Everyone who seeks a valid, impartial explanation for Plath’s suicide should read this book.” What aspects of Plath’s life and state of mind, as depicted by Moses, pull the reader most powerfully into sympathy with her plight?

13. Does the novel invoke the reader’s sympathy for Ted Hughes, who is often seen as the villain of the Plath story? If so, how?

14. Harkening back to George Steiner’s reference to Plath’s “essentially austere manner,” comment on Moses’s prose style and use of imagery. Whose point of view does the narrator take? Why?

A Note about Sylvia Plath’s Ariel

The table of contents of Wintering reflects Plath’s intended order and inclusion of poems for Ariel, had she lived to see the collection into print. Instead, Ted Hughes rearranged the order and replaced fourteen poems with thirteen others of his own choosing. In Plath’s version the final poem was to be the bee poem “Wintering,” which ends with the stanza, “Will the hive survive, will the gladiolas / Succeed in banking their fires / To enter another year? / What will they taste of, the Christmas roses? / The bees are flying. They taste the spring.” But the published version of the book ends with the darker poems of early 1963, including “Edge.” Ariel was published in 1965 with Hughes’s selection and sequencing of the poems. For readers who wish to read the poems in the sequence Plath intended, the twelve poems missing from Ariel can be found in The Collected Poems.

Kate Moses was born in San Francisco in 1962 to a British father and an American mother and grew up in various parts of the United States before returning to California to attend college. She subsequently worked as an editor in publishing and as literary director at San Francisco’s Intersection for the Arts. In 1997 she became one of the two founding editors of Salon.com’s Mothers Who Think Web site, which led to the American Book Award–winning anthology Mothers Who Think, coedited with Camille Peri. She lives in San Francisco with her husband and their two children. Wintering is her first novel.

Dimanche and Other Stories
Irene Nemirovsky

Book of My Mother
Albert Cohen

Zazie in the Metro
Raymond Queneau

The Fires of Autumn
Irene Nemirovsky

Remembrance of Things Past, Volume I
Marcel Proust

Abel and Cain
Gregor von Rezzori
Back to Top