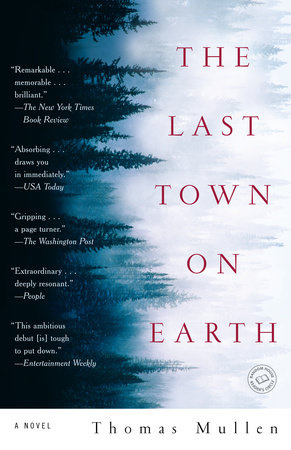 1. In what ways does Thomas Mullen use foreshadowing throughout the novel?

2. The Commonwealth quarantine is rife with moral ramifications. What are its consequences? Was Charles’ decision reasonable? What would you have done in his place?

3. The gauze mask has a ubiquitous presence throughout the story. What is its symbolic significance?

4. The flu often causes its victims to experience delusions. What other examples of delusion, literal or figurative, can you find throughout the novel?

5. Rebecca, Elsie, Tamara and other women in the novel have important influences on their male loved ones. What do these women have in common? In what ways do they exert their influence?

6. What is Frank’s significance? Why does Philip grow so attached to him?

7. Does the relationship between Frank and the C.O. resonate with Philip and Graham’s relationship? If so, how?

8. Were you surprised by Philip’s recovery? Why do you think Mullen allows him (and the rest of the Worthy family) to survive?

9. How has Philip developed by the end of the novel? Has his character progressed or regressed? Having been “stripped of so many things that he thought had defined who he was” (page 387), how, then, should we view his prior experiences?

10. Philip initially calls Graham a murderer for shooting the first soldier, but ultimately ends up shooting Bartrum to save Graham’s life. Is there a difference between their acts? Where does Philip and Graham’s relationship stand by the end of the novel?

11. A prominent motif throughout the novel is that of starting over after experiencing loss. Bearing this in mind, is your interpretation of the ending optimistic or pessimistic?

13. Do you think Philip and Graham’s behavior differed in part because of their situations? Does that make their decisions about the soldier more or less sympathetic/understandable?

Learn More About The Last Town on Earth
print

A Tip for the Hangman
Allison Epstein

The Drifters
James A. Michener

The Fires of Spring
James A. Michener

Return to Paradise
James A. Michener

Into the Savage Country
Shannon Burke

Our Game
John le Carré
Back to Top