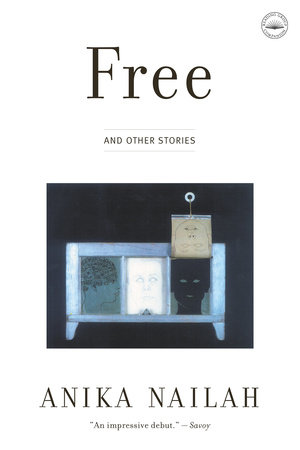 The stories in Free offer a moving, strikingly original perspective on how cultural experiences and social assumptions impact our lives. “Trudy” depicts a battle of wills between a black salesclerk and a white customer, shining a harsh light on the bigotry of the 1950s. In “My Side of the Story,” a little boy struggles to understand why his mother has abandoned him despite her claims that she loves him. “All These Years” is a touching vignette about a couple married for fifty-four years who reminisce about the attraction they felt at their very first meeting and realize that the magic still remains. In the aptly titled “Inside Out,” a man who has adopted all the trappings of the white world–the hair, the clothes, the speech, the attitudes–finds himself still ostracized in his office and gently mocked at home by a wife who embraces her blackness with pride.

To all of these stories, Nailah brilliantly exposes the injustices and struggles African Americans confront, the skills they develop in order to survive, and the psychological and spiritual costs of survival.

"As fluid as the turn of the page, Anika Nailah’s timeless–often painfully so–debut collection quietly gives voice to those screaming to be heard. In lesser hands, clarity, strength and hope would not prevail."
–Brian Keith Jackson, author of The View From Here and The Queen of Harlem

"Brilliant. The language is soothing yet biting and you are constantly challenged by unique metaphors and fresh perspectives. Free is a stunning debut."
–Yolanda Joe, author of This Just In

"The stories in Free are plainspoken, understated and deceptively complex. Anika Nailah makes everyday interactions between black and white, young and old, into capsules of insight about who we are culturally and how we interact across the barriers of race, age and class. There is an honest wisdom in this slim volume.”
–David Anthony Durham, author of Gabriel’s Story

1. What theme or themes do you think tie these stories together?

2. Which story or stories had the greatest impact on you? Why?

4. In the first story in “Four,” Gumbo is running away from something named madness. What is the madness that Gumbo is running away from? What does the madness represent for Gumbo’s sister Marion, their father, and grandfather? What does weight represent for Marion? What meaning does it have for Maureen? Is Gumbo able to come to terms with madness by the fifth story, “August Dance”?

5. The senses play a big part in the second story in “Four.” What does music, Jimmy’s hair, and barbershop smells represent in “Jimmy?”

6. All five stories take place in Murrayville and we see music as a theme by the final story in the set, “August Dance.” Why do you think the author chose to tie the stories together? What role does music play in each of these stories?

7. In “My Side of the Story,” Eddie uses the word “ugly” several times to describe things around him (“Miss Zimmerman was the ugliest white woman I had ever seen,” “[the new house] is uglier than Miss Zimmerman.” “…pass the ugly houses.”) Why is everything ugly to Eddie? Eddie’s father, William, seems devastated that his wife has left. Why is Eddie’s grandmother so happy? What is the symbolism in Eddie’s allowing Malcolm’s leash to fall into the lake?

8. Several characters in the book are children trying to cope with the mysteries of adult behavior, people who have allowed society to define who they are, and others who are trying to live with the difficult choices they have made. In particular, one thread seems to focus on women and issues of abandonment. What is the significance of the women in some of the stories leaving their marriages and families after so many years [twenty years in “My Side of the Story,” thirty years in “Free”]? Concerning the difficult choices we have to make in order to survive in American society, is it necessary to lose one’s personal language in order to be accepted in society like the two Williams of “My Side of the Story” p.38 and “Inside Out” p. 161?

9. In “The Ride,” did Andrew, the cab driver, purposely stop the car in that area of Boston? Why did Andrew feel free to talk to Frank, a customer, the way he did versus how Trudy handled her customer in “Trudy”?

10. Religion and vivid colors stand out when contrasted with the drab setting in “Sunday Visit.” What does religion and colors represent? In court, the prosecutors used the fact that Freeda was a drug user to convict her of Nathaniel’s death. Do you believe Freeda when she says she was not taking drugs when her son died?

11. Do you think Hoffman was telling the truth when he told Matt that Tanya was not good for him in “The Bucket”? Do you think Matt will continue to see Tanya? Would you jeopardize your future for someone you love?

12. Discuss the quote from Dostoevski’s The Brothers Karamazov [“Within beauty both shores meet and all contradictions exist side by side…God and the Devil are fighting there,…”] used in “Deena.” When Deena looks into the mirror, she sees herself differently than how others see her. How does Deena feel about beauty? How does the author convey the importance we place on beauty through Deena? What does Deena imagine people will see if she goes outside? Who is the man who calls her and what type of relationship do they have?

13. There is something reminiscent that follows William in “In and Out.” He seems familiar. Who do you think he is? Why does the only other black man in the office avoid William? How is Boston different from Mobile, William’s hometown, and how does it reflect the lives of its citizens? How does Maybelle know what William “saw” in the mirror?

14. In the story “Free” what can you deduce about the woman Paula’s mother was before she left her husband, and the person she appeared to be in the latter part of her life? Why was Paula the only one that could sense her mother? Who is free, Paula or her mother? Why?

Anika Nailah is the director of Books of Hope, a program that encourages young people to write and self-publish their own books. Her stories have appeared in several African American newspapers, including Reunion and Flare. She lives in Massachusetts.


From the Hardcover edition.
Learn More About Free
print

On the Nature of Human Romantic Interaction
Karl Iagnemma

In the Salt Marsh
Nancy Willard

An Audience of Chairs
Joan Clark

An Octave Above Thunder
Carol Muske

The Rest of Us
Jacquelyn Mitchard

Let Nothing You Dismay
Mark o’Donnell

Red to the Rind
Stan Rice

If I Knew You Were Going To Be This Beautiful, I Never Would Have Let You Go
Judy Chicurel

My Remarkable Uncle
Stephen Leacock
Back to Top