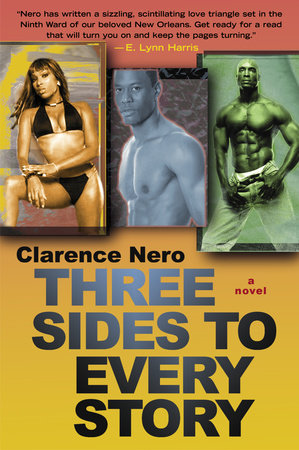 1. Three Sides to Every Story takes on many cultural stereotypes, including effeminate gay men, angry black women, and ruthless drug dealers, to name a few. Were any ideas you have about particular types of people or situations challenged? If so, how?

2. In Three Sides, author Clarence Nero reminds us that many social and economic forces affect the lives of people living in the Ninth Ward of New Orleans. What are some of these forces that the characters contend with?

3. How does materialism influence the characters of Tonya, Johnny, Kojack, or others? Imagine yourself in some of the predicaments in which they find themselves: fresh out of prison, no college education, tempted by the lure of easy money, and so forth. How would you respond? If you’ve ever been in a similar situation to the characters, what did you do? How did you cope?

4. This novel portrays troubled relationships between parents and their children, whether it is because of abusive parenting, neglect, abandonment, or the untimely death of a mother or father.

Think about the mothers in the novel. Tonya’s mother is bitter and violent; Kelly’s mother is a drug addict; Johnny’s “sophisticated” mother submits to her husband’s bullying. “Mother” Pandora St. Craft—the male leader of the House of St. Craft, a nonbiological family of gay people—might be considered the finest example of motherhood in the book. What can Pandora teach some of the other mothers who appear in the novel? What can these families referred to as “houses” teach us about family?

5. Think about the recent frenzy surrounding “down-low” men and the misconception that they are the main culprits for the spread of HIV in the African American community. When Tonya discovers that she is HIV-positive, she presumes that Johnny must be the source of her infection because he is gay. It turns out that Johnny is HIV-negative and that Tonya’s other ex-boyfriend, Rico – a straight and very promiscuous hip-hop star – has probably infected her. How does Tonya’s infection challenge generalizations about HIV transmission in the African American community (and, furthermore, in all communities)?

6. Homophobia runs rampant in the community portrayed in Three Sides; Reverend Lomack’s fire-and-brimstone religious beliefs, Kojack’s anti-gay actions, Tonya’s accusation, and Johnny’s self-loathing are all forms of homophobia. Some critics point out that in light of such homophobia, it is no wonder that black men who have sex with other men are scared to come out. What responsibility should communities take for creating a climate in which gay or bisexual men—fearing for their safety and their lives—pretend to be straight or try to become straight?

7. Johnny’s secret desire for other men is central to Three Sides to Every Story, but it is not the only secret in the novel. Others keep secrets too: Reverend Lomack of the attempted “exorcism” of his five-year-old son, James of his acquaintance with Tonya, Tonya of her fling with Rico, and Johnny of Pandora’s illness, to name a few.

Are there times when people should keep a secret at any and all costs? When should one break a vow or come clean? Consider, for example, that Johnny vowed to keep Pandora’s illness a secret. This promise placed Johnny in a bind. On the one hand, he could keep the vow he made to Pandora. This would protect James from the painful knowledge that his mentor was deathly ill, but it would also keep James from seeing Pandora in what might have been Pandora’s final days. On the other hand, Johnny could have broken his promise to Pandora and disclosed the illness to James. There is no simple solution to this predicament. What would you have done, and why?

8. Fueled by pain, anger, distrust, and frustration, many of the characters in the novel spend a lot of time reacting to each other with their words and actions. Yet it’s only toward the end of the novel, when Johnny and Tonya are honest with each other and are forced to chill out because both James and Tonya are in the hospital, that their lives seem to take a very different direction. What is the author showing in the novel about the effects of people reacting angrily toward one another versus being calm and still?

9. Much of New Orleans – particularly poor, predominantly African American communities – was ravaged by Hurricane Katrina. Though Three Sides is a work of fiction, it is inspired by real people and lives, and it serves as a testament to the community devastated by this disaster. Imagine how the individual characters in the novel might be affected by Katrina and how they would cope as survivors. Take into account the specific aspects of their lives and lifestyles.

10. Three Sides touches upon many important social concerns: the spread of AIDS, domestic violence, homophobia, injustice in the criminal justice system, drug abuse in poor and African American communities, even high blood pressure among black Americans. Jot down some of the issues examined in the book and consider them in relation to current events.

Learn More About Three Sides to Every Story
print

Is the Bitch Dead, Or What?
Karen Hunter and Wendy Williams

Read Between the Lies
Lori Bryant-Woolridge

A Love of My Own
E. Lynn Harris

Going the Distance
Jennifer Fusco
Back to Top