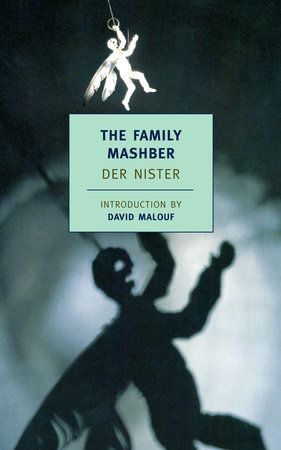 The Family Mashber is a protean work: a tale of a divided family and divided souls, a panoramic picture of an Eastern European town, a social satire, a kabbalistic allegory, an innovative fusion of modernist art and traditional storytelling, a tale of weird humor and mounting tragic power, embellished with a host of uncanny and fantastical ﬁgures drawn from daily life and the depths of the unconscious. Above all, the book is an account of a world in crisis (in Hebrew, mashber means crisis), torn between the competing claims of family, community, business, politics, the individual conscience, and an elusive God.

At the center of the book are three brothers: the businessman Moshe, at the height of his fortunes as the story begins, but whose luck takes a permanent turn for the worse; the religious seeker Luzi, who, for all his otherworldliness, ﬁnds himself ever more caught up in worldly affairs; and the idiot-savant Alter, whose reclusive existence is tortured by fear and sexual desire. The novel is also haunted by the enigmatic ﬁgure of Sruli Gol, a drunk, a profaner of sacred things, an outcast, who nonetheless ﬁnds his way through every door and may well hold the key to the brothers’ destinies.

"Pinkhas Kahanovitsh, who wrote under the pseudonym Der Nister (or ‘The Hidden One’), was a master of the surreal…What is astounding about this book, despite its extreme realism, is how it achieves a kind of surrealistic magic of its own. Despite its outwardly censor-approved story, the novel contains a hidden commentary on coercive belief and, through its breathtaking depth of detail, an almost supernatural resurrection of a Jewish life that failed to prove its right to exist. Reading this massive novel is the closest anyone can come today to living in that world." –Dara Horn, Foreword Magazine

"The restoration to the light of this extraordinary novel is an act of literary and cultural redemption. More than that, the restitution of this Yiddish masterwork-as life-saturated as the other great Russian novels–is an augmentation of world literature." -Cynthia Ozick

"The great achievement of The Family Mashber is to have re-created with such passionate objectivity, in all its complexity and breadth, a world what exists now only in this enduring memorial to it…a book that leads us…to cross thresholds, most of all the threshold of our own experience; to enter in and be moved like him by the ‘spirit of celebration.’" –The New York Review of Books

"This vast mural of the Ukraine, written in Yiddish 50 years ago and only now published in English…is notable for its depth and breadth of characterization, noise and variety, coarse comedy and Goya-esque depiction of jostling, importunate mobs. Readers won’t soon forget the mansions and hovels, refuse-strewn alleys and fragrant courts of the market town so vividly re-created in this powerful novel." –Publishers Weekly

"Earthily realistic and powerfully transcendental…it holds much reward for anyone attracted to the reincarnation of a culture now disappeared, but brought to life by a passionate sense of tribal history." –The Herald

"One of the masterpieces of Soviet fiction." –The Modern Jewish Canon