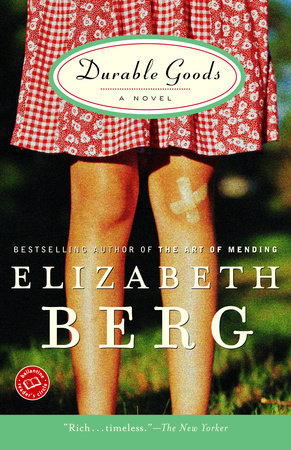 1. Durable Goods is a first-person narrative. What effect does this technique have on the telling of the story for you? Who is the novel’s narrator, and what are some characteristics of her narrative voice? How does Berg’s writing capture or evoke the character of adolescence?

2. Throughout the story, Katie sometimes calls her father “Dad,” but most often refers to him as “he” or “him.” It is clear that Katie and her sister are talking about their father, even though they never mention his name. Likewise, their mother also remains nameless throughout the novel. What does this tell you about Katie’s relationship with her father and the evolution of her relationship with her mother?

3. Katie’s father is a conflicted character. Though he is abusive and neglectful, he is not completely villainized. Discuss Berg’s characterizations of Mr. Nash, as a man and as a father. How did you feel about him at the end of the book? Were you ever sympathetic toward him, as Katie becomes at the end of the novel, when she recalls him standing out in the rain without an umbrella?

4. Katie is an astute and insightful observer of people and situations. At one point she comments, “Sometimes, it seems to me that the only thing in the world is people just trying.” How did you interpret this statement? How is this sentiment reflected in and woven throughout the novel?

5. There are several themes laced through the novel, such as the ways people cope with loss and grief and the different kinds of relationships between women. What are some of the underlying themes in this book, and how does Berg capture or express them? What literary techniques does she employ to convey the themes of the novel?

7. The novel is shaded by a deep sense of spirituality. Katie speaks often of her relationship with God, andwe see how that relationship is affected by the loss of her mother. How does Katie reflect on religion? How does this help her cope with a sense of grief?

8. Grief and loss are ongoing themes in the book, on several levels. What sort of losses do the Nash girls suffer throughout the book? How do they cope with them? How does their father cope with his grief? Give a few examples by which it becomes clear that communicating pain is considered taboo in the Nash household. What impact does this limitation
have on the relationships within the Nash family?

9. Describe Katie’s friend Cherylanne and her family (Belle and Bubba). How does the apparent disparity between the two girls and their families help to shed light on Katie’s character and situation?

10. Berg’s writing has been described as both “quiet” and “delicate.” With respect to Durable Goods, how would you interpret these descriptions? Do you think they are accurate? How would you describe Berg’s style in this novel?

11. Durable Goods is imbued with a sense of immediacy. How does Berg make the reader feel present in that particular time and place with Katie Nash? Select some passages that were particularly telling or successful in creating a sense of setting. Did Berg’s technique in creating a literary atmosphere enable you to feel more connected to her characters?

12. While Katie’s situation is unique, she is truly a universal character. Did you find yourself able to identify with her? If so, how, and at what points in the story did you feel most connected? Did you identify with any of the other characters? How?

13. The end of the novel is infused with both hope and sadness. Did the end of the book leave you wanting more or wondering what would happen to Katie, Diane, and their father? How did you feel about Katie’s decision to return home? What do you predict will happen to the family at this point in their story?

Fair and Tender Ladies
Back to Top