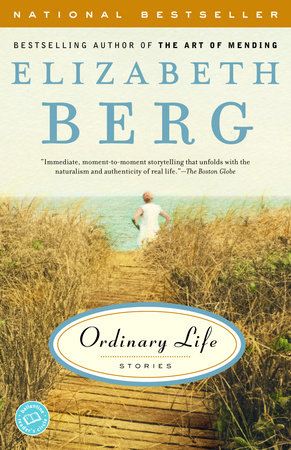 1. Elizabeth Berg’s writing style is spare, clear, accessible, and deft. Does it fit her material? Do you think it is easy to write this way?

2. Berg titles this collection Ordinary Life and her characters are all “ordinary” people. What is meant by the term “ordinary” in this book? And what is it about “ordinary life” and “ordinary people” that is so compelling?

3. In the title story, Mavis McPherson locks herself in the bathroom for a few days. Why? What good does it do? What harm? What happens in that bathroom, and what difference will the time she spent there cast over the rest of her life?

4. Martha in “Things We Used to Believe” sees herself as “severely married.” What does this tell us about her character? How does she describe her relationship with Alan? What do you think their relationship is? In the end, when she agrees she is “bad,” what does she mean?

5. Illness, in Ordinary Life, is seen as a “Departure from Normal.” How do people with terminal illnesses reconnect with so-called ordinary life? How could people who are estranged by illness come to feel less estranged, more a part of life? If you were given a bad diagnosis, what would help you feel less isolated and different?

7. Adultery is a subject in several stories: “Things We Used to Believe,” “Regrets Only,” “What Stays,” and “White Dwarf.” In “White Dwarf,” George says of adultery, “These things happen.” How does his assessment
strike you? How does Berg portray adultery in these diverse stories? Does she approve or disapprove of it? Is adultery necessarily bad? Does it necessarily deserve forgiveness?

8. In “Regrets Only,” Laurence, a gay man, seeks to set his dying mother’s mind at ease about his sexual identity by introducing her to a fake girlfriend. Was this a good idea on any level? What effect did this deception have on him? What did it have on his friend who poses as the girlfriend? What did she learn from their shared kiss—about herself, about him, about her marriage?

9. George in “White Dwarf” says, “Men don’t talk.” But in many of these stories, men do talk—some reluctantly, in response to women forcing them, and often frankly, openly, even heartlessly (“Take This Quiz,” “Martin’s Letter to Nan,” “White Dwarf”). What do they say? And what do you think about it? Do you think men and women communicate differently, as Berg suggests? What is your experience in the ongoing dialogue between men and women?

10. “Martin’s Letter to Nan” is the last story Elizabeth Berg wrote in Ordinary Life, yet it sits in the middle of the book. Why do you think she arranged the stories in the way that she did, with the title story first, and this story in the middle?

11. Berg says that the writing of “Martin’s Letter to Nan” was “fun.” What, do you suppose, made it fun for her? Is her sense of fun communicated to the reader? If so, how?

12. What does the thief in “The Thief” steal? Why do you think Jonathan Hansen picked out Kate Conway to rob?What happened between him and Kate Conway? Should she have called the police?

13. Kate, the narrator of “One Time at Christmas, in My Sister’s Bathroom,” is at a crisis point in her relationship with her incommunicative, critical father, Sam. Everybody else in her family seems to take Sam in stride, so why does Kate have such trouble with him? When Kate goes into the bathroom and cries, what is she crying about? What happens during the course of time Kate spends in that bathroom? What has changed by the time she’s left it?

14. Sarah Harris in “The Matchmaker” is eleven, in fullblown adolescence, see-sawing between childhood and adulthood and trying, step-by-step, to make her own way in the world. What does she do that’s childlike? When does she step into an adult role? How does she feel about her growing personal power?

16. “Today’s Special” was the first short story that Elizabeth Berg wrote, yet it is placed last in this book. Why do you think she did that? What are the concerns and elements in “Today’s Special” that Berg returns to, expands,and elaborates on in other stories? How have her interests and technique changed?

17. If you had to choose a favorite story in this collection which would it be? What are the elements of the story that most appealed to you? Which story did you find least engaging?

The Happily Ever After
Avi Steinberg

The Secret Lives of the Kudzu Debutantes
Cathy Holton

All Together Now
Matthew Norman