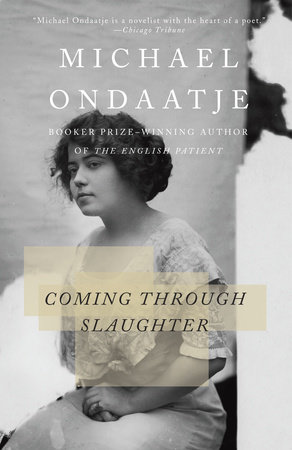 The questions, discussion topics, and author biography that follow are intended to enhance your group’s reading of Michael Ondaatje’s Coming Through Slaughter. We hope they will give you a number of interesting angles from which to consider this lively, haunting and seductive novel.

First published in 1976, Coming Through Slaughter is one of the best loved of Michael Ondaatje’s novels. At the turn of the century, the Storyville district of New Orleans had some 2000 prostitutes, 70 professional gamblers, and 3 piano players. But it had only one man who played the cornet like Buddy Bolden — who cut his hair by day at N. Joseph’s Shaving Parlor, and at night played jazz, unleashing an unforgettable wildness and passion in crowded rooms. Self-destructively in love with two women, he embodied all the dire claims that music places on its acolytes. At the age of 31, Buddy Bolden went mad. From these spare facts, Michael Ondaatje weaves a story as beautiful and chilling as a New Orleans funeral procession, where even the mourners dance.

"Perhaps the finest jazz novel ever written." — The Sunday Times

"A remarkable piece of writing— Brilliantly wrought." — The Toronto Star

"A spectacular breakthrough into a new prose form." — The Globe and Mail

1. Although he is one of jazz music’s legends and the finest cornet player of his time, little is actually known about Charles "Buddy" Bolden or his life. Why do you think Ondaatje chose Bolden as his protagonist? What does the author mean when he says, "Did not want to pose in your accent but think in your brain and body—"? (p. 135)

2. The story is told in many fragments and many voices: Actual accounts of Bolden’s life and performances, oral history, lists of songs, biographical facts, narrative, dialogue, interior monologues, psychiatric reports, bits of poetry and lyrics, the author’s own voice. How does Ondaatje’s arrangement of the different ‘voices’ affect the way you perceive Bolden’s life? Why do you think he chose this way of telling his story?

3. New Orleans and vicinity at the turn of the century is the setting for the novel. Consider the places where the action occurs: N. Joseph’s Shaving Parlor, the river, Shell Beach, the Brewitts, Webb’s cottage, the streets of Storyville, Bellocq’s studio, Bolden’s home with Nora and the children, the mental hospital. Consider some of the metaphorical or symbolic aspects of these settings. What do they reveal about Bolden’s journey and his inner life?

4. Bolden’s life "had a fine and precise balance to it, with a careful allotment of hours." (p. 7) He was barber, publisher of The Cricket, cornet player, good husband and father, and an infamous man about town. Do you agree that his life was balanced? What upset the balance?

5. "This is the power I live in— They trust me with the cold razor at the vein under their ears. Dreams of the neck. Gushing onto the floor and my white apron." (p. 43) Does Bolden wield this power, or is he, like his audience, under its sway?

6. "Robin and Jaelin and me. I saw an awful thing among us. And that was passion could twist around and choose someone else just like that—. We had no order among ourselves. I wouldn’t let myself control the world of my music because I had no power over anything else that went on around me, in or around my body." (pp. 97-98) Consider the complex relationship between power, control, fear, and desire in the novel. What role do each of these play in Buddy’s ensuing madness?

7. "He watched himself go back to the Brewitts and ask if he could stay with them. The silent ones. Post music. After ambition." (p. 34) Do you see Bolden’s move to the Brewitts as positive or negative? "The silence of Jaelin Brewitt understood them all." (p. 62) How do Jaelin Brewitt and Bolden differ? What do they have in common? Does Bolden admire Jaelin?

8. "Then Bolden did a merciless thing. For the first time he used his cornet as jewelry. After the couple had closed their door, he slipped in a mouthpiece—. With every sweet stylised gesture that he knew no one could see he aimed for the gentlest music he knew—Music for the three of them, the other two in bed, not saying a word." (p. 28) What does it mean that he used his cornet as jewelry, and why was it merciless?

10. Water in all its forms—liquid, rain, mist, ice—is a recurring image in the novel. Think of the ice and the mist on the windows of N. Joseph’s Shaving Parlor and what happens after the fight with Tom Pickett. Or of Bolden’s departure by boat. Or how, at the Brewitts, Bolden immerses himself in the bath at the beginning and end of his stays. What does the water imagery tell us about what is happening to him? Is water a safe element for Bolden?

11. "E.J. Bellocq’s photographs—were an inspiration of mood and character. Private and fictional magnets drew him and Bolden together." (from the author’s acknowledgements, p. 162) Bolden says of Bellocq, "He was the first person I met who had absolutely no interest in my music." (p. 55) Why was Bolden attracted to Bellocq? Why does Nora blame Bellocq for what happens to Bolden? Do you think she’s right?

12. What does Bolden mean when he says, "We were furnished rooms and Bellocq was a window looking out"? (p. 56) Why does Bolden want to break windows? And why does a "wall of wire barrier glass" go up between Robin and Bolden after Webb comes to get him "with all his stories about me and Nora, about Gravier and Phillip Street"? (p. 83)

13. Nora’s mother’s favourite Audubon birds: the Purple Gallinule with "thoughts of self-destruction"; the Prophet Ibis, "obviously paranoid"; the Cerulean Wood Warbler, "drunk on Spanish Mulberry"; and Anhinga, the Water Turkey which "would hide by submerging—forgetting to breathe, and so drown." (pp. 19-20) Discuss these birds in light of Bolden’s personality.

14. The novel is divided into three main parts. Explore how the style of each section reflects the content. Does each section have something different to convey? Could the novel be compared to a musical composition?

15. "That is the first time I ever heard hymns and blues cooked up together— The picture kept changing with the music. It sounded like a battle between the Good Lord and the Devil—. If Bolden stops on the hymn, the Good Lord wins. If he stops on the blues, the Devil wins." (p. 78) What does this tell us about Bolden and his music?

16. Think of Bolden’s final performance in the parade. Who is the woman who dances before him? What happens to him during his final performance, and why, when it’s over, does he say to himself, "What I wanted." (p. 132)

17. "What he did too little of was sleep and what he did too much of was drink and many interpreted his later crack-up as a morality tale of a talent that debauched itself." (p. 7) Was Bolden’s descent into madness as simple as that? Does the novel help us understand what happened to him?

18. What is the "slaughter" referred to in the book’s title?

19. Bolden’s return to New Orleans: "on the third day old friends came in, shy, then too loud as they entertained him with the sort of stories he loved to hear, stories he could predict now. He sat back with just his face laughing at the jokes." (p. 119) What has changed in Bolden? Is his decision to return and play in the parade life-affirming?

20. "While I have used real names and characters and historical situations—There have been some date changes, some characters brought together, and some facts—expanded or polished to suit the truth of fiction." (from the credits and acknowledgements, p. (163) What does the author mean by the truth of fiction? Can you think of other novels, by Ondaatje or others, that have borrowed from historical record to tell a story?

Michael Ondaatje wrote Coming Through Slaughter in 1976. He received the Booker Prize in 1992 for The English Patient, becoming the first Canadian novelist ever to receive this prestigious honour, which firmly established him as a writer of international acclaim. He has been the recipient of Canada’s Governor General’s Award amongst many others. In Running in the Family Ondaatje recalls his family’s history and his own youth in his fictional memoir, a blend of "rumour" and "history." Born in Ceylon ("A pendant off the ear of India") in 1943, Ondaatje was educated in England, and emigrated to Canada in 1962. He received a B.A. from the University of Toronto in 1965, and an M.A. from Queen’s University, Kingston in 1967. The author also of nine collections of poetry and four novels, he early on became admired as a literary collage artist who combines pieces of legend and history in a design new to fiction. He says he is influenced "not so much by other books as by other art forms, such as music and painting. They seem more advanced than the novel, which is stuck in a 19th century image of what the novel should be."Michael Ondaatje lives in Toronto, Canada.
Learn More About Coming Through Slaughter
print

Property
Valerie Martin
Back to Top