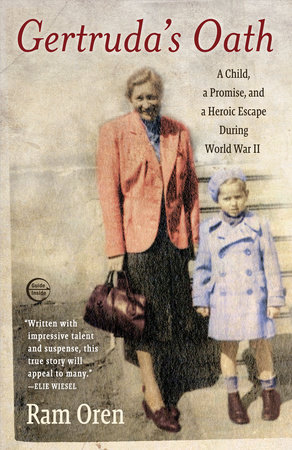 NOTE TO TEACHERS
In Gertruda’s Oath, Ram Oren relates the harrowing true story of Michael Stolowitzky, a newly-orphaned Jewish boy born to a wealthy Polish family, and Gertruda Babilinska, his Catholic nanny. As Gertruda and Michael seek safe haven in a Europe ravaged by World War II, they face seemingly insurmountable challenges. Oren also examines these tumultuous wartime events through the story of SS officer Karl Rink, whose allegiance to the Nazi Party is called into question by his refusal to divorce his Jewish wife, Mira. In this exploration of the impact of the genocide perpetuated by Adolf Hitler and his adherents, Oren focuses his attention on the remarkable examples of courage that emerged out of the tragedy of the Holocaust. This guide offers instructors the opportunity to consider questions raised by Oren’s account, questions of religious and national affiliation, the nature of sacrifice, and the moral calculus of good and evil.

ABOUT THIS BOOK
Ram Oren [Please see this additional edit JC]uncovered the amazing story of Gertruda Babilinska and Michael Stolowitzky after more than a year of research in preparation for a book about the Exodus, the beleaguered transport ship that attempted to deliver more than four thousand Holocaust refugees to Palestine in 1947. In the course of his research, Oren sought out Michael Stolowitzky, a passenger on the Exodus, for an interview. After several hours together, Orem realized that his planned book about the Exodus would never see fruition; instead, he turned his attention to retelling Michael and Gertruda’s story, relying on interviews with Michael, immediate family members and survivors of the Holocaust, contemporaneous documents, and his own extensive historical research. In the course of retelling what he characterizes as “poignant history,” Oren used his estimable talents as a novelist to fill in gaps in the narrative that depended on the incomplete recollections of those involved directly in the story.
The rise of the Nazi Party in 1930s Germany meant different things to different people. For Karl Rink, formerly a junior accountant at a chemical firm in Berlin, and recently fired from his job due to the economic depression, Hitler’s rise to power represented an opportunity. Rink gratefully accepted an invitation to join the SS—the elite organization of German security services, despite the concerns for their family’s safety voiced by his Jewish wife, Mira.
For Jacob and Lydia Stolowitzky, a prosperous Jewish family who resided in Warsaw with their young son, Michael, Hitler’s advance into Europe presented both a serious threat to their livelihood and to their way of life. When Lydia and Jacob were separated and unable to communicate with each other during the German occupation of Poland, Lydia came to depend almost exclusively on Michael’s Catholic nanny, Gertruda Babilinska. On Lydia’s deathbed, Gertruda vowed to Lydia that she would protect Michael, help him emigrate to Palestine, and raise him as her own child if necessary.
As Gertruda and Michael navigated the dangers in a Nazi-controlled Europe, they encountered Karl Rink and many other consequential figures who changed the course of their lives forever.

ABOUT THE AUTHOR
Ram Oren is a popular Israeli author known for his bestselling suspense novels. Born in Tel-Aviv in 1936, Oren worked as an unpaid messenger boy for Yediot Aharonot, Israel’s leading daily. He later became the paper’s legal correspondent. Oren received his law degree from Hebrew University in Jerusalem. He returned to Yediot Aharonot and served in various capacities, including military affairs correspondent, legal counsel, chief reporter in New York, and Senior Editor.  Following the extraordinary success of his novel, Seduction, Oren left the newspaper in 1994 to focus on his literary career. He founded the Keshet publishing house in 1995, and is the author of fifteen books.

TEACHING IDEAS
As a work of nonfiction, Gertruda’s Oath brings the horror and devastation of the Holocaust [tk not sure why this is bolded EJ] [not sure..it wasn’t bolded on the version I submitted JC]to life with unforgettable details from the actual experiences of real people. Because the book examines the experience of the Holocaust from multiple perspectives—from the vantage point of its victims and its perpetrators, from Poles and Germans, from Jews and Christians, from adults and children, from women and men—it provides an unusually comprehensive examination of many of the essential elements involved in the conflicts that dominated World War II, including, but not limited to nationality, ethnicity, religious affiliation, and racial prejudice. Furthermore, the book’s celebration of quiet acts of courage in a time of brutal devastation highlights the eternal battle between good and evil waged by humankind.
As a work of historical nonfiction, Gertruda’s Oath would make an excellent text in a literature, social studies or history class that examines World War II and its impact on individuals and societies.

SUGGESTED ACTIVITIES
1) Students will be familiar with Michael Stolowitzky’s experience of the Holocaust from Ram Oren’s account in Gertruda’s Oath. Ask students to research another nonfiction account of Jewish life during World War II to learn more about how children in other parts of Europe fared under Hitler’s regime. How did children’s experiences of the privations of the Holocaust differ from that of adults? How did they cope with the extreme conditions in concentration camps? Among child survivors, how common were “guardian angels”—people like Gertruda Babilinska, Dr. Berman, and Father Gedovsky—who enabled them to endure the trials they faced?
2) Divide the class into four groups. Ask two groups to gather evidence from Gertruda’s Oath that exonerates SS officer Karl Rink of his crimes during World War II. Ask the other two groups to collect evidence that would convict Rink of crimes against humanity. Then pair each group of students with an opposing group, and stage two mini-trials to determine the guilt or innocence of Karl Rink. Ask students to vote on Rink’s fate, based on the strength of the evidence presented for and against him.
3) Ask students to imagine that they and their families are going to be forced to abandon their homes, and that they have twenty-four hours to get their affairs in order and to pack a small suitcase of belongings to take with them. How would they feel? What would they do to prepare for their departure? Who would they contact, and what would they be forced to leave behind? Encourage students to make lists of what they would want to bring with them and to share their lists with one another in small groups. What do these lists reveal?

VOCABULARY
Anti-Semite, one who exhibits hostility toward people of Jewish faith
Aryan, a person conforming to the Nazi “master race” ideology; of Nordic descent, or
blond-haired and blue-eyed
Gentile, a non-Jew
ghetto, the name for the densely-populated, poverty-stricken neighborhoods in Europe
where people of Jewish descent were confined prior to their transportation to concentration camps
Haganah, Jewish paramilitary organization in the British Mandate of Palestine from
1920-1948
kibbutz, a collective living community in Israel, traditionally based around agricultural
activities
Mamusha, Polish for “Mommy”
Mossad le’Aliyah Bet, a branch of the Haganah that operated to facilitate Jewish
immigration to Palestine
Star of David, a six-pointed star symbolizing Jewish identity and Judaism
Yad Vashem, the Holocaust Martyrs’ and Heroes’ Remembrance Authority
zloty, Polish currency

BEYOND THE BOOK
1) Nuremberg Trials
Following the end of World War II, a series of military tribunals called the Nuremberg Trials and situated in the city of Nuremberg, Germany, were held by the victorious Allied Forces to prosecute prominent members of the defeated Nazi leadership. Over 200 German war crimes defendants were tried at Nuremberg. Ask students to read about the international response to the crimes committed in the course of World War II. Students may be surprised to learn that not all Nazi leaders responsible for the mass murder were able to be prosecuted. How did the international efforts to bring to justice members of the Nazi leadership attempt to satisfy the many nations involved?
2) British Mandate for Palestine
When Gertruda and Michael attempted to enter Palestine from the Exodus, they were refused entry by the British, who had legal authority to administer laws in Palestine, according to a law confirmed by the League of Nations in 1923. Ask students to research the history of British governance of Palestine. What accounts for the British refusal to allow a boat carrying over 4,000 Jewish refugees to land in Palestine? How—if at all—is the Britain’s role in Palestine’s history reflected in the current state of affairs in the Middle East?
3) Swiss banks and World War II
Michael Stolowitzky’s efforts to reclaim his family’s assets from Swiss banks were modestly successful, but many other Holocaust survivors were not so fortunate. In 1995, the World Jewish Congress began negotiations on behalf of Jewish organizations and Holocaust survivors and their heirs, who alleged that Swiss banks and the Swiss government were not being forthcoming with dormant funds in their banks belonging to victims of Nazi persecution. Ask students to research the settlement of the WJC claim and analyze other belated efforts on the part of the Swiss government to acknowledge the rights of Holocaust victims. How might these awards be as significant in terms of their symbolism as they are in terms of their recompense?

ABOUT THIS GUIDE WRITER
This guide was prepared by Julie Cooper, a writer from Bainbridge Island, Washington. A graduate of Harvard University, Oxford University, and the University of Washington, Julie works as a freelance writer and editor of educational materials and reading group guides.

Learn More About Gertruda’s Oath
pdf
Back to Top