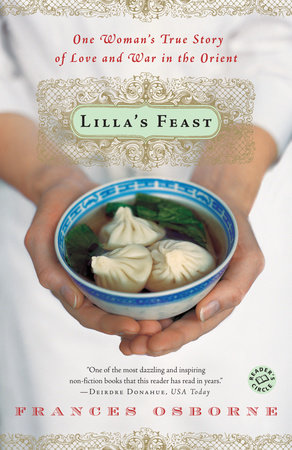 1. Lilla spends her childhood as a “little princess,” but she ends up a strong, independent woman. How much of this change do you attribute to the characteristics she was born with, and how much to the circumstances that she found herself in? To what extent do you think our personalities can be shaped by our experiences rather than what we inherit? Can you identify which traits of your own personality you have inherited, and which have been formed by your experiences?

2. “It is not often that lovers swap roles,” writes Osborne. How do Ernie and Lilla change roles in their marriage? Does the love between them change? Lilla has three significant sexual relationships in her life. How do her feelings for each lover—and each for her—differ? Do her relationships improve or worsen? Do you think she was ever really in love?

3. Lilla’s Feastis a family memoir. How does the fact that the author both knew and is related to Lilla affect the narrative? And what can the biography of an ordinary woman caught up in world events—rather than a biography of a famous person orchestrating those events—teach us? How different is history when seen from an eye-level point of view, rather than the political point ofview?

4. “Down by the waterfront,” writes Osborne of nineteenth-century Shanghai, “the smells of steaming rice and charring meat mingled with traces of opium smoke.” Lilla’s Feast is marked by its descriptive passages, taking the reader to, inter alia, the mountains of India, Edwardian England, and a Japanese concentration camp. Where do you find Osborne’s descriptive style most evocative? How does Osborne primarily create this effect in your chosen passage—through the context of physical surroundings, or calling on the senses? Which ones?

5. Food, to Lilla, is more than nutrition. She “dreams of peeling apples with insides like half-frozen snow.” What role, or roles, does food play in the story? How do the attitudes of Alice Eckford, Ernie, and Papa Howell to food reflect their attitudes to life? In the prison camp, how do the inmates’ changing circumstances affect their relationship with food? Has your own relationship with food ever been altered by events in your life?

6. Lilla was brought up “to be a wife and nothing else.” How do the choices open to Lilla as a woman change during her lifetime? Do you think she takes full advantage of them? What do these changes reveal about the choices available to women today?

7. There is an old Chinese curse, “May you live in interesting times.” Lilla’s life took her through world wars and across the world in a time of great political upheaval, leading her to have to turn her life around and start over again and again. Which of her turnarounds do you find the most inspirational? Why?

8. “At the end of 1907, a long-awaited great hand reached down from the sky and plucked Ernie from his dusty desk,” writes Osborne, making the point that people’s lives can be turned this way or that by events over which they have little control. How much do external circumstances and chance—as opposed to the characters’ own choices— change the lives of Lilla and her family members? How might Lilla’s life have turned out if her husband’s troopship had not been sunk by a U-boat in the Second World War? If she had married Malcolm Rattray, or another man, before the Great Depression of the early thirties? Or if the family firm had not gone bankrupt? At what other points could Lilla’s life have gone in another direction—and how? Can you identify any similar turning points for yourself where an external event, or your own choice, has fundamentally changed the course ofyour life

9. To what extent do the forceful characters of Lilla’s and Ernie’s mothers affect their lives? What does the interaction between the Howells and the Eckfords reveal about social and intellectual snobbery between older, educated families and new money at the turn of the twentieth century? Does the same pattern hold true in any way today?

10. What prompted Lilla to start writing her cookbook? What added symbolism did it take on once she had been marched out of her home and imprisoned? How did her relationship to her cookbook change during her years in the camp? Why do you think she hid the book when she was released?

11. “Every aspect of the inmates’ lives in Weihsien [prison camp] was ordered by layer upon layer of ruthlessly efficient committees,” writes Osborne. What does the formation of these committees reveal about humans’ innate desire to organize themselves into hierarchies? Why do you think this is? Have you ever been a founding member of any club or organization? How did its hierarchy evolve?

12. Even though none of Lilla’s family had any Chinese ancestry, and they had come to China as “colonials,” many of her family felt that China was their real home, the only place to which they belonged. What was it about China that made it home to Lilla? What does this tell us about the meaning of home? What made Lilla turn down the chance to escape after Pearl Harbor? Does this help to explain why, even today, people living in war zones appear to fail to flee until it is too late?

Wish You Were Here
Nick Webb

Wars I Have Seen
Gertrude Stein