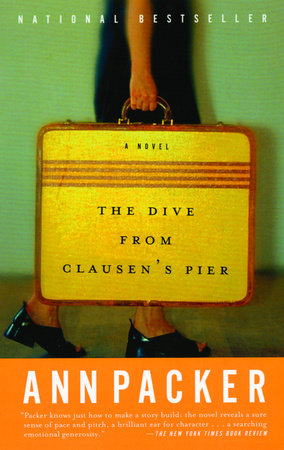 “Packer knows just how to make a story build: the novel reveals a sure sense of pace and pitch, a brilliant ear for character and a searching emotional generosity.” —The New York Times Book Review

The introduction, discussion questions, suggestions for further reading, and author biography that follow are intended to enhance your group’s discussion of The Dive from Clausen’s Pier, Ann Packer’s critically acclaimed and bestselling debut novel. Centering on one young woman’s conflict between her commitment to the people in her life and her duty to be true to herself, this absorbing story challenges us to look inward and to ask discomfiting questions about our relationships, our priorities, and our selflessness for which there are neither easy nor definitive answers.

Carrie Bell and Mike Mayer have been a couple forever; dating at fourteen and engaged after graduating from the University of Wisconsin, Madison, they have settled into a comfortable relationship. However, Carrie is beginning to struggle with feelings of doubt about their future. In the midst of her doubts, tragedy befalls Mike. At Carrie’s and Mike’s traditional Memorial Day picnic with friends, Mike dives from Clausen’s Pier into water that is too low, breaking his neck and falling into a coma. An anxious Carrie diligently visits Mike in the hospital, praying with their friends and families that he will wake up, knowing that he will be a quadriplegic if he does survive. But when Mike does awaken, Carrie’s initial relief is quickly replaced by nagging doubts. She avoids the attempts of her mother and of Jamie, her lifelong best friend, to reach out to her. She dreads her inevitable contact with the Mayers, and she resents the accusing looks of Rooster, Mike’s best friend, who senses her wavering commitment to Mike. Weary of her confused, hidden feelings, Carrie finally breaks up with Mike and runs off to New York in an attempt at self-discovery. Carrie’s taste of new life in New York City leads her to places in her heart and mind that stimulate and thrill her in ways she never knew were possible. But Carrie finds she cannot easily leave behind her old life in Madison, nor can she escape from herself.

2. What effect does Rooster have on Carrie’s emotional turmoil during Part One? Is Rooster fair in his attack on Carrie outside the library [p. 85-87]?

3. When Carrie and Mike see the bride and groom on TV in the hospital, Carrie thinks: “If his next words were Let’s get a minister over here and get married tomorrow, I would say yes” [p. 101]. What feelings are driving her at this point? What might have happened to Carrie and Mike if Mike had persisted in getting married after the accident?

4. What does Mike mean when he says: “It was like we were already married—we’d gone too far” [p. 413]? What went wrong or changed in Carrie’s and Mike’s relationship? Did Carrie or Mike change, or did their circumstances change, or both?

5. Carrie tells the reader: “For him [Mike], it was all about the future. For me, the past” [p. 77]. How does Carrie’s past inform her present? What do each of the three memories of her father mean for Carrie [p. 31]? What Carrie does not remember about her father is “nearly infinite. . . . A whole book of things, an entire encyclopedia, a volume that I tried and tried to fill at the Mayers’” [p. 31]. Might Carrie have stayed with Mike and the Mayers for longer than she would have because she was trying to fill the void left by her father? What influence does Carrie’s memory of her father have on her decision to leave Madison—and then, ultimately, to return? By returning, is Carrie escaping her father’s legacy?

6. When she leaves Madison, Carrie seems to believe that people are defined by the actions or perceptions of other people. She says: “Because we were caretakers of each other’s habits and expressions, weren’t we, witnesses who didn’t just see but who gave existence?” [p. 142]. Remembering Kilroy’s touch, she says, “How extraordinary . . . that someone could touch you and make you into something” [p. 367]. Carrie’s mother asserts that “people aren’t defined by what they do so much as they define what they do” [p. 354]. Are people defined by what they do, or by how others perceive them, or by neither? Does Carrie’s opinion on this topic change by the novel’s end?

7. How does Mike’s family react to his accident? How do his friends react? What about Carrie’s outward behavior in reaction to Mike’s tragedy makes her behavior so surprising to their families and friends? Are there typical or expected ways people react to tragedies like this? What do deviations from this expected behavior signify?

8. Carrie explains her love for sewing: “It was the inexorability of it that appealed to me, how a length of fabric became a group of cut-out pieces that gradually took on the shape of a garment” [p. 12]. How is the process of sewing, and Carrie’s own projects with expensive silk fabrics, a metaphor for Carrie’s emotional evolution? Does playing pool have a similar meaning for Kilroy?

9. Is it Jamie’s call that propels Carrie to finally return home, or is some other event the catalyst for her return? Does guilt or obligation play a role in Carrie’s decision to stay in Wisconsin? Is she trying to prove something to herself or to others? Is she acting truly selflessly? Is she settling, giving up, or being true to herself?

10. Could Carrie properly be called a heroine? What would have been the heroic path for her to take?

11. Carrie poses the question: “How much do we owe the people we love?” [p. 147] When she leaves Madison, she seems to view the answer as an all-or-nothing proposition: “What I had discovered was that I couldn’t give up my life for Mike—that’s how I saw it at the time, that’s the choice I thought I had to make. And because I couldn’t give up everything, I also thought I couldn’t give up anything” [p. 147]. Does Carrie see her answer differently at the end of the novel? What does Carrie give up for Mike? Did she need Kilroy in order to have something other than herself to give up for Mike? What does Kilroy owe his parents? Can love be separate from obligation? How might Jamie’s or Rooster’s or Kilroy’s definition of love differ from Carrie’s definition?

12. How do the tones and styles of Part One and Part Three reflect Carrie’s different state of mind before her time in New York City and afterward?

13. What is Carrie looking for in a relationship? What characteristics of Kilroy attract Carrie that were or are absent in Mike?

15. Is the resolution to the mystery surrounding Kilroy satisfying? Is “the tragedy named Mike” different for Carrie than for Kilroy [p. 400]?

16. Why are the minor characters of Harvey (Mike’s new roommate in the hospital) and Harvey’s wife [pp. 220–221] so significant to the novel’s themes of love, obligation, and choices?

17. Mike and Rooster theorize about the irony in names such as the dentist, Dr. Richard Moler, or the orthopedist, Dr. Bonebrake [p. 20]. Do the names in the novel—Carrie Bell, Kilroy, Rooster—have any ironic meaning?

19. Envision an inverted version of The Dive from Clausen’s Pier written from Mike’s point of view in which Carrie had been the one to have had the accident. How might their lives have played out differently? What does this exercise reveal about their relationship and Carrie’s character?

Ann Packer received the Great Lakes Book Award for The Dive from Clausen’s Pier, which was a national bestseller. She is also the author of Mendocino and Other Stories. She is a past recipient of a James Michener award and a National Endowment for the Arts fellowship. Her fiction has appeared in The New Yorker, Ploughshares, and other magazines, as well as in Prize Stories 1992: The O. Henry Awards. She lives in northern California with her family.

Learn More About The Dive From Clausen’s Pier
print

Beatrice and Virgil
Yann Martel
Back to Top