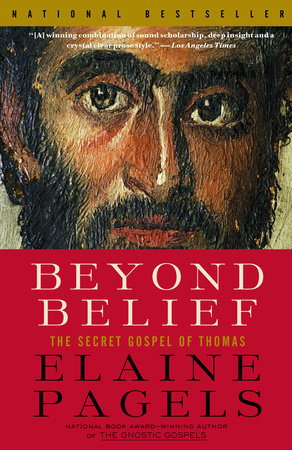 The introduction, discussion questions, suggestions for further reading, and author biography that follow are designed to enhance your group’s discussion of Beyond Belief: The Secret Gospel of Thomas, Elaine Pagels’s fascinating exploration of how and why the New Testament acquired its present form.

In Beyond Belief, Elaine Pagels, one of the world’s most esteemed scholars of religion, takes readers back to the beginning of Christianity. In light of the Nag Hammadi texts, suppressed by the Church in 367 A.D. and discovered in Egypt in 1945, Pagels takes a fresh look at how Christianity began and why it took the shape it did. The process is both exciting and discomfiting, as Pagels herself must begin to “unlearn what I thought I knew, and to shed presuppositions I had taken for granted” [p. 181].

What she discovers is that the Nag Hammadi texts, originally regarded by Church authorities as heretical and highly subjective Christian writings, are filled with a refreshing spiritual vibrancy and diversity. Such texts as the Gospel of Thomas, the Gospel of Philip, the Gospel of Mary Magdalene, the Secret Book of John, and others, point toward a more inward, personal, and ultimately deeper spiritual relationship with God. They suggest that Jesus taught not to look outside of oneself or wait for the Second Coming to find the kingdom of God but to search within to realize one’s own divine nature in the here and now. As such, they conflicted with the four canonical gospels of Matthew, Mark, Luke, and John, which emphasize Jesus’s unique divinity, God’s ultimate incomprehensibility, and the separation of the human and divine worlds. Pagels also discovers that the process by which Iraneous, Athanasius, and other early theologians arrived at the unified New Testament and the Nicene Creed was contentious, intolerant of differing views of Jesus and his teachings, and often more politically than spiritually motivated.

Throughout, in writing filled with insight, Pagels weaves her own personal story of questioning, doubt, and affirmation in the face of a dramatically changed sense of the origins of Christianity.

1. Why has Elaine Pagels chosen Beyond Belief as her title? How can the title be interpreted?

2. Pagels begins each chapter with a personal reflection. What do these passages add to the book? What do they reveal about Pagels’s own struggles with some aspects of traditional Christian beliefs? For what is she searching, as both a scholar and a Christian?

4. Pagels says, “Thomas’s Gospel encourages the hearer not so much to believe in Jesus, as John requires, as to seek to know God through one’s own, divinely given capacity, since all are created in the image of God” [p. 34]. Why is this distinction so important? Why were Thomas’s ideas considered heretical?

5. Why did Irenaeus and other early Christian theologians feel it was essential to unify Christian beliefs into a canon of orthodox teachings that all Christians must accept? What political pressures influenced their decisions?

6. What are the dangers of spiritual intuitions, visions, divine revelations, and other intensely subjective religious experiences? What are some of their destructive consequences? What positive value is there in such experiences? Should the Church encourage or discourage Christians from seeking or relying on these methods of access to a direct knowledge of God?

7. How do the Nag Hammadi texts alter our view of early Christianity? Do they, as Pagels suggests, offer a more open, diverse, and less doctrinal version of Christianity? Can they coexist with canonical texts? Should they be embraced by Christians? Why were they suppressed?

8. In the Gospel of Thomas, Jesus tells his disciples, when they ask about the resurrection, “What you look forward to has already come, but you do not recognize it,” and says that “the kingdom of the Father is spread out upon the earth, and people do not see it” [p. 50]. What are the implications of these statements? How do they differ from more traditional ideas of the resurrection and the kingdom of God?

9. Pagels discusses several highly symbolic or metaphorical readings of the Bible, such as The Secret Book of John, in which Eve is interpreted as an embodiment of “epinoia—a ‘creative’ or ‘inventive’ consciousness,” and the apple as a symbol of higher spiritual knowledge [pp. 164–67]. How convincing is this reading? What does it offer that more conventional readings do not? Why did Irenaeus want to prohibit such interpretations?

10. At the beginning of Chapter 5, Pagels asks herself “Why not just leave Christianity—and religion—behind, as so many others have done?” [p. 143] Why is she tempted to abandon the church? What is it about Christianity that she still finds compelling? Does her situation seem representative of the ambivalence that many Christians feel today?

11. Based on your reading of Beyond Belief, how should religious tradition and innovation be balanced? How can the Church maintain its traditions without suppressing the imaginative involvement of creative individuals?

12. Pagels ends by saying that “the wealth and diversity of our religious traditions” encourages “those who endeavor, in Jesus’ words, to ‘seek, and you shall find’” [p. 185]. Why does she end her book in this way? What aspect of Christianity is she underscoring?

Elaine Pagels is the author of Adam, Eve, and the Serpent; The Origin of Satan; and The Gnostic Gospels, which won the National Book Critics Circle Award and the National Book Award. She is the Harrington Spear Paine Professor of Religion at Princeton University.

Not in God’s Name

The Battle for God

The Lost Art of Scripture

The Crisis of Islam
Back to Top