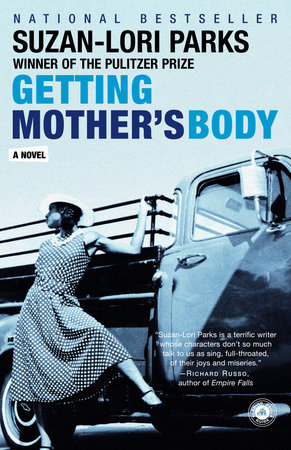 1. Reviewers have compared Getting Mother’s Body to William Faulkner’s As I Lay Dying. How do these novels compare? Do you think Parks set out to achieve the same goal that Faulkner had in mind when he wrote As I Lay Dying?

2. Billy Beede is one of Parks’s spunkiest characters, and clearly has brains and a strong will. Why then, is she interested in someone like Snipes? Discuss the ways in which she seems older than her years, and the instances where she shows her naïveté.

3. Why does Billy refer to her mother as “Willa Mae”? How do you think Billy regarded her mother when she was alive? Do you see similarities between Billy and Willa Mae–does Billy represent an extension of her mother? Discuss how the town regarded Willa Mae in comparison to how they view her daughter.

4. On page 31, Willa Mae relays her views on human weakness with her hole analogy. Do you agree with what her philosophy? Are there certain people in your life who demonstrate this Achille’s heel?

5. In the 1960s, homosexuality wasn’t a widely accepted trait. How does Parks portray Dill’s sexuality throughout the novel? Why is it virtually accepted in this particular Texan town?

6. Willa Mae’s songs are interspersed throughout the characters’ monologues. What function do they serve? Why do you think this novel is structured the way it is (in the form of monologues)?

7. Willa Mae and Dill clearly had a volatile relationship that involved betrayal and violence. What attracted Dill to Willa Mae in the first place? How do you think Dill felt about Willa Mae by the time she died?

8. Despite their differences in class, the Rochfoucaults and the Beedes clearly have ties to each other. How is the bond of family treated in this novel? Are Homer’s motives only fueled by material greed?

9. What attracts Homer to Billy? Is she appealing in the same way Willa Mae was to men when she was young? How does Billy use her sexuality to manipulate?

10. How is abortion regarded in Getting Mother’s Body? Do you think it would be viewed differently if it were someone other than Billy who wanted one?

11. On page 81, Mrs. Jackson remarks that “Billy’s got that Beede luck, bless her heart.” What is she referring to? Do you think the Beedes are ultimately lucky? Is their eventfullroad trip ultimately redeemed?

12. Suzan-Lori Parks is a Pulitzer Prize Winner for Drama–Getting Mother’s Body is her first novel. Is her experience as a playwright evident in the language of the novel? Does Parks’s writing style obviously differ from someone who exclusively writes novels? How would you envision this novel on stage?

From the Hardcover edition.
Learn More About Getting Mother’s Body
print

Where the Money Went

Right by My Side

We Want What We Want
Back to Top