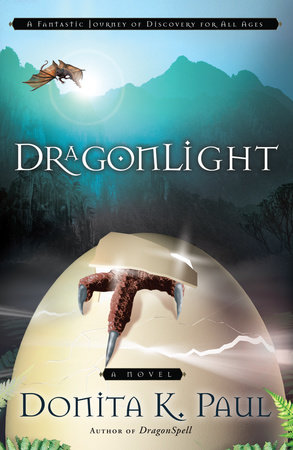 1. Kale, as the dragonkeeper, has hundreds of dragons, yet she knows when even one goes astray and she goes to look for them. Compare this to Jesus being the Good Shepherd. How is the “draw” that pulls Kale toward nearby dragon eggs similar to the calling God places on our lives?

2. What is wrong with the Followers’ desire to be closer to Wulder and achieve a higher calling? In what ways, do they resemble a cult movement? Are cult members always noticeable from outward appearances? Are the souls of ex-cult members damaged beyond repair? Are we as believers to follow their methods in choosing who we will give the message to, seeking out the most likely candidates? Do we need to earn God’s favor or the opportunity to be enlightened? How do they mix lies in with the truth to make their heresy palatable? To what Scripture verse does the following principle refer, ‘Do not gather a sheep that howls into the fold of your flock’?

3. Why does Bardon’s rebuke to Garmey, turn into an exhortation? From Garmey’s perspective, if he didn’t hit his wife, make fun of her food or holler at her when the boys made a ruckus that was enough. How does this fall short of true godly love and respect? What is the Biblical principle that Bardon conveys with the message, “you can’t elevate yourself without first elevating her.” He reminds Garmey that others watch our actions, especially those closest to us. What tone will others see in your actions?

4. Mot Angra and Satan have many similarities both in their existence originating from another world and being the essence of evil. What are the scales that are shed from the beast symbolic of? How does he show his calculating intelligence? Toopka offers Mot Angra the opportunity for repentance and forgiveness from Wulder, which he refuses. Is it possible for Satan’s corrupted soul to repent? How does his presence create a disturbance to the Believers around him? Does Satan ever hinder our abilities or effectiveness?

5. Relate Kale’s comment, “Wulder never seems to follow what I would call a logical plan” to 1 Corinthians 1:25. How does hindsight help us in seeing God’s perspective and reasons? Wulder chooses to use weak characters even though the chance of failure is higher, why does our Lord also often select unlikely vessels? How does God equip those He calls for the challenges ahead of them? Toopka knows she has a heavy task in front of her, but without knowing all the details, she becomes anxious. Have you ever been nervous about a calling God placed before you?

6. As Kale and Bardon petition Wulder for guidance, they are jointly connected in the spirit with all the others present at the meeting. In like manner, how are our spirits rejuvenated by joining the body of Christ in prayer? They see outwardly a glow on Toopka. What does this mean? Holt’s aura colors seem to be changing also, as a result of their prayer. What is symbolic of this new thread? What was wrong with Holt’s previous ulterior motive of doing what is right in order to cleanse himself of guilt?

7. Sometimes it seems our worst enemy is not external but our own selfish nature. Bardon is tempted to give into thoughts of pride when talking with Holt about the error of his ways. How effective is he in identifying the source of temptation as being from his own flesh? Do his thoughts bring honor to Wulder? How is his confession of his own sinful nature an encouragement to Holt? Later, he is tempted to be angry with Wulder. How quick is he to bring these thoughts captive and instead replace them with trust? Kale also struggles with wrong thoughts about Toopka. How does choosing to dwell on a speculation poison our mind and attitude? How can those attitudes play out in our actions?

8. The meech, who live in fear of Mot Angra, chant and focus on his mural as they enter the cave, but they are rebuked by Paladin for this. Why should we not concentrate on evil? Consider this in light of Psalm 123:1-2. Although thoughts of Satan can be frightening, should we as Believers live in fear?

9. Toopka and Sittiponder have a supernatural encounter with Wulder. How does each of them “experience” the encounter? Gilda, after becoming a hardened, arrogant person, is given a second lease on life, when she also encounters Wulder in an after-death experience. Compare who she was before, to her new repentant spirit. Kale is privileged to be used by Wulder to aid in healing and thus in His presence frequently. How is she both drained and rejuvenated by these times with him?

10. The innocent, the redeemed and the ill-equipped; how are these three unlikely heroes walking into the flames of the dragon similar to Shadrach, Meshach and Abendigo? Why does God not always tell us ahead of time what He expects of us?

11. Along the quest, Kale begins to long for the comforts of home but she is reminded that they can not have true rest until they finish their task. If they forsake their friends for comfort now, it will be shallow and not satisfying. Are you being faithful to the task the Lord has given you? What is your source of refreshing when you are weary? When will our rest as Believers come? When does Wulder provide rest for Kale and Bardon, allowing them to “go home and sit by the fire”?

Beyond Order
Jordan B. Peterson

How to Avoid a Climate Disaster
Bill Gates

The Sum of Us
Heather McGhee

A Rhythm of Prayer

Let Me Tell You What I Mean
Joan Didion