Eye of the Crow Teacher’s Guide 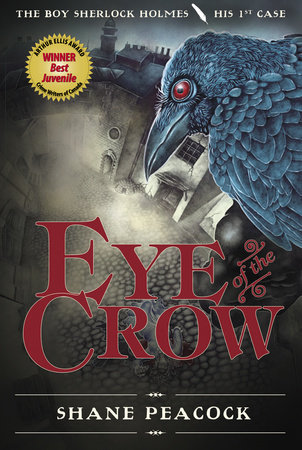 Eye of the Crow Teacher’s Guide

It is the spring of 1867 and a yellow fog hangs over London. In the dead of night, a woman is murdered on a narrow, cobblestone street in the old Whitechapel section of the city. No one sees the gruesome crime. Or so it seems. Up above, two crows are watching. The next morning, the dark-haired son of a disinherited upper-class woman and her poor Jewish husband reads about the crime in an illustrated newspaper. Unquestionably gifted, but hounded by racist schoolyard taunts and burdened by bitterness about his life, the young boy spends his days playing hooky in central London, dreaming, watching the rich and famous, and reading newspaper accounts of spectacular crimes. The Whitechapel murder intrigues him and so do the city’s crows. The brilliant black birds fly free, but suffer the same prejudice he feels. Circumstances bring young Sherlock to the scene of the crime and to the understanding that the crows saw it happen. He soon comes to believe that the accused, a young Muslim butcher, is innocent. But then Sherlock, too, becomes implicated and finds himself on the run from the police. Sherlock pursues the crime’s solution through a series of brilliant deductions and daring exploits, but a terrible price is paid along the way.

Thus begins the darkly dramatic series “The Boy Sherlock Holmes,” the never-before- told boyhood adventures of the greatest detective who ever lived.

SHANE PEACOCK is a novelist, biographer, playwright, screenwriter, and journalist. He likes to write about larger-than-life characters, real or from his imagination, and has tried many of the things he writes about–high-wire walking, sumo wrestling and sailing around on a flying trapeze. He is the author of six other books, three plays, and many magazine articles. He has also written four documentaries such as Team Spirit for the CTV network. Eye of the Crow is the world’s first novel about the childhood exploits of Sherlock Homes. Shane Peacock lives with his family near Cobourg, Ontario.

GEOGRAPHY
Sherlock Holmes loves London, and in this novel he races about the city, either pursuing the villain or being pursued. Have students find out more about London, its origins and its development. By the 1860s it was the greatest city in the world. Have them find a map of the city and locate the places Sherlock frequented: where he lived; where the crime occurred; where the murderer lived. Have them describe the various parts of the city — the East End, Southwark, Mayfair — with the physical characteristics of each.

LITERATURE
Eye of the Crow is like an updated Victorian novel for today’s young people (and adults) echoing the detective and “sensation” novels of the time, though with a literary bent. The original Sherlock Holmes stories were written by Sir Arthur Conan Doyle. The first, A Study in Scarlet, appeared in 1887. But Holmes was not the first detective in literature. Have the students investigate the writings of Edgar Allen Poe, Charles Dickens, and Wilkie Collins to learn more about early detective and mystery stories. Several great writers are actually mentioned in the novel. Have students learn more about them and ask why they might have been featured in this story.

HISTORY
Eye of the Crow takes place in London in 1867 when life was rapidly changing. A very important Reform Bill was passed through British parliament that year. Ask students to find out something about it and how — or if — it changed Victorian Britain. Guiding that bill through its passage was Conservative Benjamin Disraeli, soon to be the first Jewish Prime Minister of Britain. He and his Liberal opponent, William Ewart Gladstone, are seen and discussed in the novel. Ask students to investigate the opposing political views and personalities of these two men and find out how their rivalry shaped not only England, but also the world.

SOCIOLOGY
Though London was quite rightly a revered city in the Victorian period, and possibly the first great modern city, it was also rife with problems, all associated with a metropolis growing at an incredible rate and modernizing just as quickly. Prejudice, crime, disease, social strife, and pollution were some of the emerging difficulties. Ask students to research these issues and struggles.

1. The title, Eye of the Crow, has more than one meaning. See if students can find at least two and discuss the significance of both eyes and crows in the story.

2. It has been said that Sherlock Holmes was the first superhero. Do the students agree? Ask them to compare him to their own superheroes in comic books, movies, graphic novels, etc. How is Shane Peacock’s creation, in particular, somewhat in the superhero mold?

3. There are many connections to the adult Sherlock Holmes in the novel. See how many students can find. They can be found in characters’ names, situations, etc.

4. Are crows really what Peacock suggests they are? Are they as intelligent, mythical, and hated? What sorts of crows live in England? Research and discuss these amazing, yet reviled birds. (See www.theboyshelockholmes.com for a start)

5. Who was Jack the Ripper? Where did his crimes take place? What connections do they have to the murder in this book?

6. What was the Crystal Palace and what was its historical significance? Do students know of any famous modern buildings that seem to be modeled on it?

1. Ask students who Sherlock Holmes is, seeking many responses.

2. The novel tries to depict a Sherlock Holmes who really could grow up to be the legendary adult detective. Ask students to learn about Conan Doyle’s adult character and see whether or not, in their own judgment, Shane Peacock’s boy Sherlock could indeed become the adult Sherlock character. In what way has Peacock created an unexpected childhood for him? Would most Sherlockians” (find out who they are) think their hero was half-Jewish and poor as a child? Once students have learned about the original Sherlock break them into discussion groups to debate the above. Or have a real debate in which students create their own childhood for Sherlock and then defend their scenarios.

3. Sherlock was a master of “deduction.” He could use the smallest of clues to solve the most mystifying of crimes. In this novel we see his emerging skills as an observer. He can glance at people and understand a great deal about them. Have students create characters, complete with histories, and dress up, displaying telltale clues about themselves. See if other students can decipher those clues to reveal the person’s characteristics and story.

4. Reading a great detective story is like slowing peeling back the layers of a problem until you reach the solution. Have students write their own detective stories, then read them aloud, trying to make them as dramatic as possible. Then have them explain how they put together their mysteries and how they decided to unveil them.

5. Ask students to imagine living in Victorian London and talk of their life as a member of the upper class, middle class, working class, the downtrodden, or as an actress, a scientist, a Crystal Palace employee etc.

6. Choose an original Sherlock Holmes tale and read it to the class. Have students read sections and have fun trying on accents and reading dramatically.

“The first intriguing volume in an ambitious new series. A shadowy, vividly described London. . . . Creative references to Doyle’s characters abound . . . and Sherlock himself is cleverly interpreted. . . . [made] both fascinating and complex . . . plenty of readers will like the smart, young detective they find here, and find themselves irresistibly drawn into his thrilling adventures.”
Booklist, Starred review

“ In Eye of the Crow, Shane Peacock has created a cleverly inventive background story for Sherlock Holmes that explains the adult character’s reluctance to talk about his family life. He’s also managed to create a thrilling, impeccably paced murder mystery. Peacock reveals the budding detective’s very real fears and insecurities, providing just enough detail about the young Sherlock’s methods to make him an entirely believable teenage precursor to the master detective. Peacock also neatly creates a sense of the bustle of Victorian London, making the squalid grunginess of the East End almost waft off the pages.”
Quill & Quire (Chosen as one of 2007 Books of the Year)

OTHER BOOKS BY SHANE PEACOCK:
The Mystery of Ireland’s Eye:
A Dylan Maples Adventure
ISBN 0141310456

Learn More About Eye of the Crow
print

The Ruby in the Smoke: A Sally Lockhart Mystery
Philip Pullman