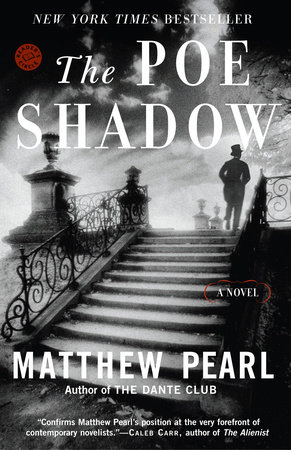 1. Aside from Quentin, most of the novel’s characters in this 1849 setting do not appreciate or read Edgar Allan Poe’s works, and this fact in part provokes Quentin to try and rescue Poe’s name. Why do you think Poe means so much to Quentin?

2. If you have read Poe, what are your thoughts about his work? Is there any author, from past or present, whom you would "fight" for as much as Quentin does for Poe?

3. In addition to serving as physical locales, Baltimore and Paris may be said to serve as "characters" in the book. What do the cities add to the novel, and what kinds of details bring alive their histories?

4. As the historical note at the back of the novel explains, the book uses authentic details about Poe’s strange death. Had you heard anything about Poe’s death before reading The Poe Shadow? After reading the evidence and theories throughout the novel, do you agree with all of the conclusions presented by the characters in the final chapters, or do you have any of your own theories?

5. Auguste Duponte and Baron Claude Dupin can be seen as doubles or doppelgangers, and the book discusses Poe’s use of doubles in works such as "William Wilson," a tale that features two identical characters with the same names. Discuss the use of doubles and doubling in The Poe Shadow. Are there any other doubles besides Duponte and Dupin? Does Quentin have any doubles? Does Edgar Allan Poe?

6. The word "shadow" is used in many different ways in the novel. Quentin tells us, "Poe once wrote in a tale about the conflict between the substance and the shadow inside of us. The substance, what we know we should do, and the shadow, the dangerous and giggling Imp of the Perverse, the dark knowledge of what we must or will do or secretly want. The shadow always prevails." What are possible meanings of the title The Poe Shadow?

7. If you had been in Quentin’s position at the end of the novel, would you have made the information on Poe’s death public, or kept it private?

8. What do you think would have happened if Quentin had met Poe before Poe died? Do you think this would have made his personal quest more or less important to him?

Murder on the Leviathan
Boris Akunin

The Price of Murder
Bruce Alexander

Seven for a Secret
Lyndsay Faye