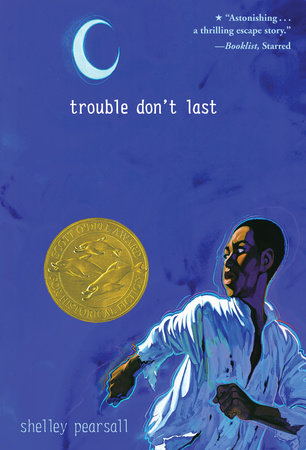 Samuel and Harrison, two slaves on a Kentucky farm, are in search of freedom and Samuel’s mother when they escape to Canada via the Underground Railroad.

Set in Kentucky in 1859, eleven-year-old Samuel seems content with his life as a slave and his work in Master Hackler’s kitchen where he is under the watchful eye of Lilly, a fellow slave and mother figure. He wonders about freedom, but doesn’t understand what it really means until Harrison, an elderly slave, snatches him from his bed and takes him on a long journey to Canada. Together, the young boy and old man run at night and sleep in hiding places during the day. Though constantly on the alert for slave hunters, the two are helped by conductors on the Underground Railroad, including a river man who gets them across the Ohio River. Along the way, Harrison reveals an important secret about Samuel’s mother, and the two wonder about Lilly, who is back on Hackler’s farm, and what will happen to them when they reach Canada.

Shelley Pearsall is a former middle elementary school and middle school teacher, and the former historian for Hale Farm and Village, a 160-acre living-history museum in Ohio that re-creates mid-19th-century lives. Trouble Don’t Last, her first novel, won the prestigious Scott O’Dell Award for Historical Fiction, and was also named a Booklist Editors’ Choice, a Booklist Top Ten Historical Fiction for Youth and a Top Ten First Novel for Youth. The author lives in Brecksville, Ohio.

“I had reasoned dis out in my mind; There was one of two things I had a right to, liberty or death; If I could not have one, I would have de oder.”–Harriet Tubman

Ask students to research the Underground Railroad and Harriet Tubman’s work to make the railroad a success. Then ask them to write a brief essay that interprets the above quote.

Family–Slaves were often separated from their real families, but they worked to create a traditional family structure. Who is Samuel’s family? How is Samuel’s relationship with Lilly different from his relationship with Harrison? Why is Samuel so worried about Lilly when he and Harrison are on the run? Describe Samuel’s feelings when Harrison gives him the gray yarn that belonged to his mother. How do you know that Harrison planned to someday tell Samuel the truth about his mother?

Freedom–Discuss how the River Jordan metaphor relates to freedom. (pp. 55—56) Harrison had run away once before, but was caught, beaten, and returned to Master Hackler. Ask the class to discuss why Harrison is so willing to run away again, especially knowing the consequences of being caught. At what point does Samuel know that Harrison is planning to take him and escape? What is Samuel’s idea of freedom? Discuss whether Harrison is looking for freedom for himself, or primarily for Samuel.

Fear–Samuel says, “Truth is, even the thought of going straight to hell didn’t scare me as much as the thought of running away.” (p. 21) Discuss why Samuel goes with Harrison when he is so frightened by the thoughts of running away. Trace Samuel’s fears throughout the novel. How does Harrison help Samuel with his fears? At what point does Samuel begin to handle his fears? Ask students to name the characters in the novel who appear fearless.

Courage–Discuss how courage is related to fear. Ask students to debate Samuel’s most courageous moment. There are people all along the way that help Samuel and Harrison. How does it take courage for these people to serve as guides on the Underground Railroad?

Survival–Engage the class in a discussion about the survival techniques used by runaway slaves like Samuel and Harrison. How does the river man help Samuel develop survival skills? Explain the following warning from the river man: “Haste will always be your undoing. You wait and look for their weakness. Then you plan a way out.” (p. 92)

Prejudice–The Widow Taylor hides Samuel and Harrison in her cellar, but she won’t touch the coins their hands had touched. How is this an act of prejudice? Discuss what Harrison means when he tells Samuel, “Corn and crows, they don’t grow in the same field.” (p. 108) Who is the corn? Who are the crows? How does Harrison’s attitude reveal his prejudice?

Language Arts–Shelley Pearsall uses similes to create certain images. For example, “He walked ahead, snapping branches like bones under his feet.” (p. 87) Ask students to find other similes in the novel. As an exercise, encourage them to replace Pearsall’s similes with their own.

Reverend Pry is writing a brief story about Samuel to tell to his congregation. He begins, “Our forty-fifth visitor was a boy named Samuel, eleven years of age.” (p. 122) Have students write out the beginning of Reverend Pry’s speech and then continue the story up to the point where Samuel and Harrison reach Canada. They should write the way they think Reverend Pry would have, keeping in mind the congregation audience. Encourage them to add illustrations and read their stories aloud.

Social Studies–Among the people involved in the fight to end slavery were Frederick Douglass, John Brown, Harriet Beecher Stowe, Angelina and Sarah Grimke, William Lloyd Garrison, and Lucretia Mott. Ask each student to research the work of one of these activitists, and write a speech that he/she might have given.

The issues of slavery became the central focus of American politics in the 19th century. Ask students to research the major political issues regarding slavery such as the Black Codes, Emancipation Proclamation, Fugitive Slave Acts, Compromise of 1850, and the 13th Amendment. Have them construct a timeline that reveals the growing concerns about slavery during this time. Which politician is credited with ending slavery? How did issues of slavery continue into the 20th century?

Math–Samuel wonders how far he and Harrison have to go to get to freedom. Ask students to study the map of their journey. (p. 231) Then have them use a United States atlas and calculate the miles by today’s road system that Samuel and Harrison travel to reach freedom.

Science–Harrison becomes sick on the trip to Canada. At one point, he looks for an ax to put under the straw mattress to keep the chills away. (p. 111) Later, Belle mixes brandy and egg for Harrison’s fever and Samuel remembers Lilly remedy of boiling fence-grass and water. Ask students to investigate superstitions and health remedies, such as herbal remedies and folk cures. Make an illustrated booklet that explains these superstitions.

Drama–Big River is a musical play based on the friendship between Huckleberry Finn and the slave Jim. Play the soundtrack of Big River in class, and ask students to locate the lyrics to the songs “Muddy Water” and “The Crossin” at www.stlyrics.com/b/bigriver.htm. Suppose Trouble Don’t Last is being staged. Where in the production would Samuel and Harrison sing these two songs?

Music–Ask students to use books in the library or sites on the Internet to locate the popular Negro spiritual “Swing Low, Sweet Chariot.” Have them perform the song for another class, and explain how the song directly refers to the Underground Railroad. Students may enjoy reading the lyrics of other Negro spirituals, which can be found at xroads.Virginia.edu/~HYPER/TWH/Higg.html.

Visual Arts–A common toy in the 19th century was clay marbles. Slave children often made their own marbles by rolling the clay and applying colored designs. Samuel had a set of clay marbles until Miz Catherine took them from him. Make a set of six clay marbles that Samuel might have made after he reached Canada. Apply designs that represent freedom.

Have students create chapter illustrations using visual elements and symbols from the
novel.

History Channel
www.historychannel.com/exhibits/undergroundrr
This site discusses the history of the Underground Railroad.

Prepared by Pat Scales, Director of Library Services, the South Carolina Governor’s School for the Arts and Humanities, Greenville, SC.

May B.
Caroline Starr Rose

The River Between Us
Richard Peck

Boys of Wartime: Daniel at the Siege of Boston, 1776
Laurie Calkhoven

Children of the Longhouse
Joseph Bruchac

The Light in the Forest
Conrad Richter

The Last Kids on Earth and the Skeleton Road
Max Brallier

The Warden and the Wolf King
Andrew Peterson

Mr. Lemoncello and the Titanium Ticket
Chris Grabenstein
Back to Top