I Don’t Know How She Does It Reader’s Guide 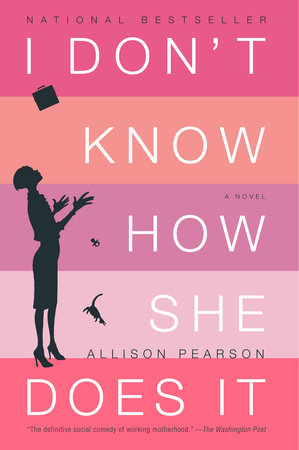 I Don’t Know How She Does It Reader’s Guide

The introduction, discussion questions, author biography, and suggested reading list that follow are intended to enhance your group’s reading of Allison Pearson’s I Don’t Know How She Does It, a hilarious, heartbreaking, and utterly unforgettable novel about a working mother trying to strike that impossible balance between work and family.

A fiercely ambitious and talented thirty-five-year-old hedge-fund manager at the London firm of Edwin Morgan Forster, Kate Reddy is a successful woman in a notoriously sexist business. Her trouble is that her other life, as a married mother of two young children, is hopelessly at odds with her day job. Her architect husband, Richard, is sweet and feckless and would never dream of replacing the paper towels in the kitchen, and Richard’s mother keeps telling Kate that her poor boy is looking thin. The children’s nanny, Paula, is haughty, spiteful, and inclined to emotional blackmail. The housekeeper doesn’t clean anything down low (bad knees) or up high (vertigo).

Kate can juggle nine different currencies in five different time zones and get herself and two children washed and dressed and out of the house in half an hour (though occasionally with the baby’s banana oatmeal smeared on her Armani suit). She can read Guess How Much I Love You? to her son while scanning the prices on a stock ticker. She can do it all (it seems)—but the stress is ridiculous. Smug stay-at-home mothers at her daughter’s school, members of what Kate calls the Muffia, are always asking her when she’s going to start working part time. How long can she go on like this?

In a novel that is at once uproariously funny and achingly sad, Allison Pearson captures the guilty secret lives of working women—the self-recrimination, the comic deceptions, the giddy exhaustion, the despair—as no other writer has. Kate Reddy’s conflicts—How are we meant to pass our days? How are we to reconcile the two passions, work and motherhood, that divide our lives?—get at the private absurdities of working motherhood as only a novel could: with humor, drama, and bracing wisdom.

1. At 1:37 a.m. on an average night, Kate Reddy has just returned from a business trip to Sweden and is banging store-bought mince pies with a rolling pin so that they’ll look homemade for her daughter’s school Christmas party. She then goes out to the trash bins to hide the pie boxes so that Paula, her nanny, won’t tell the other nannies that Kate cheated on the pies. She cleans up the kitchen and then takes a long time brushing her teeth so that her husband will fall asleep before she comes to bed (if they don’t have sex, she can skip a shower in the morning and possibly have time for Christmas shopping on the way to work). How does this sequence, along with the “Must Remember” list that follows it, work to set the comic pacing for the novel [pp. 3–10]? How successful is the opening chapter in getting the reader to sympathize with Kate and her daily challenges?

2. When Kate arrives late for work, she needs to come up with what her friend Debra calls “a Man’s Excuse” [p. 15]—something that does not have to do with sick children or an absent nanny, preferably something involving car repairs or traffic. Is Pearson accurate in describing a business world that has little patience for the out-of-office responsibilities of working mothers?

4. “There is an uneasy standoff between the two kinds of mother which sometimes makes it hard for us to talk to each other. I suspect that the nonworking mother looks at the working mother with envy and fear because she thinks that the working mum has got away with it, and the working mum looks back with fear and envy because she knows that she has not. In order to keep going in either role, you have to convince yourself that the alternative is bad” [p. 96]. How do Kate’s vexed interactions with local “Mother Superiors” reflect the truth of this statement?

5. Pearson has said of her book, “It’s a tragedy at the pace of comedy.” What does she mean by this? Do you agree?

6. Musing on her relationship with her unreliable father, Kate thinks, “Daughters striving to be the son their father never had, daughters excelling at school to win the attention of a man who was always looking the other way, daughters like poor mad Antigone pursuing the elusive ghost of paternal love. So why do all us Daddy’s Girls go and work in places so hostile to women? Because the only real comfort we get is from male approval” [p. 153]. Is this an adequate explanation for Kate’s ambition? How did her family’s instability and poverty shape her psyche?

7. How is the romantic distraction posed by Jack Abelhammer important in further illuminating Kate’s position? Is the outcome a forgone conclusion, or did she just make the right choice for herself?

8. “If you give Chris Bunce five million years he may realize that it’s possible to work alongside women without needing to take their clothes off” [p. 298]. Is Pearson right in suggesting that many workplaces tolerate the sexism of some male workers? How satisfying is Kate and Momo’s revenge upon Bunce?

9. Why has Pearson chosen to include the character of Jill Cooper-Clark, who dies of cancer at age forty-seven? Why is Jill’s memo to her husband (“Your Family: How It Works!”) so poignant? What has Jill’s friendship meant to Kate? How does it shift the novel’s comic events to a more serious context?

10. In an essay in a British newspaper, Pearson remarked, “Children may behave like liberals—they believe they should be allowed to do what they want—but what they really like, what makes them feel safe, is essentially conservative. . . . My ideals told me that men and women could both go out to work and be truly equal. My children told me something more complicated, something I really didn’t want to hear. Their need for me was like the need for water or light: it had a devastating simplicity to it. It didn’t fit any of the theories about what women were supposed to do with their lives, theories written in books often by women who never had children.” How does this statement resonate with the experiences detailed in the novel? Is this a novel that is too close to reality for comfort because Pearson tells us things we know but don’t want to acknowledge?

11. Which is a greater strain on Kate and Richard’s marriage—the children, Kate’s job, and her frequent travel, or her romantic interest in her American client? What does Pearson mean when she writes, “Any woman with a baby has already committed a kind of adultery” [p. 169]? How does the novel underscore the ways in which the arrival of children irrevocably changes the relationship between husband and wife?

12. A recent newspaper article noted that of Fortune magazine’s fifty most powerful women, one-third have husbands who stay at home with the children. Would Kate’s problems be solved if her husband left his failing architecture firm to become a stay-at-home father? Does the novel suggest that Kate needs to let him reassume the primary economic role if their marriage is to survive? Does Pearson suggest that people are still offended by the idea of a woman who makes more money than her husband? Why?

13. Some of the novel’s funniest moments have to do with clothing, as when, in her haste, Kate has overlooked some detail of her dress. She gives a major presentation wearing a red bra under a sheer white blouse; she pulls on black tights in the train on the way to Jill’s funeral without realizing that they have Playboy bunnies up the backs of the legs. How does Pearson use these moments to show how important details of dress are in the working world, and how wrong things can go when women don’t have butlers or wives to look after their clothing?

14. With their aggressive moral superiority, the women Kate calls “Mother Superiors” seem to believe they have made the right choice in staying home with their children. When Kate is tried at the imaginary “Court of Motherhood” (Chapters 6, 18, 40), why is she always on the defensive? Is this internalized “court of motherhood” something that plagues all mothers, not only those who work outside the home?

15. As Kate herself says, “Giving up work is like becoming a missing person. One of the domestic Disappeared. The post offices of Britain should be full of Wanted posters for women who lost themselves in their children and were never seen again”
[p. 170]. Is Kate’s decision to leave her job a disappointment or a relief?

16. The book ends with the question “What else?” at the end of another “Must Remember” list. Is Kate’s life qualitatively better since she left her job and moved away from London? With the final page, does Pearson imply that Kate’s life is essentially un-changed, or that it is about to take off in an exciting direction in which she will dictate the terms of her working life?

Allison Pearson graduated from Cambridge University. She taught in an inner-city London school, worked in a mental hospital, and sold advertising before becoming a journalist. Pearson was named Critic of the Year and Interviewer of the Year in the British Press Awards, is a weekly columnist in the London Evening Standard and is a member of the BBC’s Newsnight Review panel. She lives in London with her husband, the New Yorker film critic Anthony Lane, and their two children.

Lisa Belkin, Life’s Work: Confessions of an Unbalanced Mom; Susan Chira, A Mother’s Place; Rachel Cusk, A Life’s Work; Simone de Beauvoir, The Second Sex; Helen Fielding, Bridget Jones’s Diary; Cathi Hanauer, ed., The Bitch in the House; Arlie Hochschild et al., The Second Shift; Nick Hornby, How to Be Good; Susan Maushart, The Mask of Motherhood; Emma McLaughlin and Nicola Kraus, The Nanny Diaries; Helen Simpson, Getting a Life and Four Bare Legs in a Bed; Ian Sansom, The Truth About Babies: From A to Z; P. L. Travers, Mary Poppins; Edith Wharton, The House of Mirth.
Learn More About I Don’t Know How She Does It
print

Adultery
Paulo Coelho
Back to Top