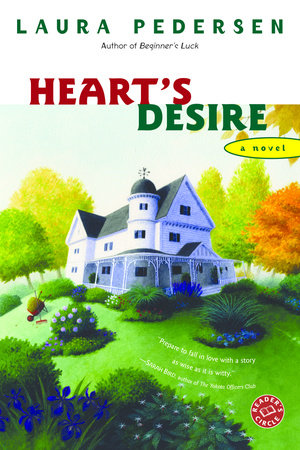 1. Hallie believes that she’s fallen in love with Auggie after a brief meeting. Is there such a thing as love at first sight?

2. Do you have a set of criteria for “the right one,” characteristics that you know you really like in a person, or do you just go by how you feel when you meet someone and then spend a bit of time together?

3. Brandt points out that most species are not monogamous. Into which category do you think humans fall? Are we meant to mate for life, be serially monogamous, or just date various people? Or does it depend on the individuals and the relationship?

4. At the beginning of the book Hallie observes that many couples seem to divorce when their kids leave for college. Do you think that people wanting to get divorced should try and stay together until their children are at least teenagers?

5. . Can your significant other also be your best friend? Is it necessary to have a good friend with whom you’re not engaged in a physical relationship in order to talk about certain things?

6. Hallie’s mother believes that Louise has taken up with a bad crowd of friends and that this is to blame for her recent wayward behavior. Is it fair to judge people by the company they choose to keep, or should you be able to see them as an individual? Would you worry if you had a teenage daughter hanging around with older guys who drove fast cars?

7. Hallie and Brandt have known each other a long time, and it appears that they might start a relationship. Has there ever been a person you really like and have known for a long time, but never considered for a relationship? What makes for “chemistry” between two people, where they both want more than friendship?

8. Hallie is having what she deems to be a good experience at college, but it sounds as if only a fraction of her time is devoted to actual learning. What percentage of high school and/or college would you say is about academics and what percentage is about other things such as learning how to be a friend, have a relationship, and basically be a human being?

9. Craig and Hallie agreed not to be exclusive while attending colleges so far away from each other. Based on your experiences, can long-distance relationships work?

10. Brandt and Louise choose abstinence when it comes to premarital sex. Is this the best option for all young people, or does it depend on the teenager? Should parents, teachers, and counselors be trying to steer teens toward abstinence, or should they provide all the information and let them decide what’s right? If you had a teenage son or daughter what route would you want him or her to take?

11. What are the pros and cons of marrying the only person with whom you ever plan on having a serious physical relationship?

12. Every once in a while we’re surprised to hear someone we thought was heterosexual announce a lifestyle change. In the book, Gil briefly considers being with a woman after a long same-sex relationship. Do you know people who have questioned their sexual preferences, and if so, do you think the urge to do so came on suddenly or had been on their minds for a while, only they may have been worried about sharing the information?

13. Ottavio wants to marry and Olivia doesn’t. Whose side are you on? Would you mind if one of your children, parents, or grandparents was living with a significant other?

14. Is it true that you always remember your first kiss and/or the first time you enter into a serious physical relationship? Do people make too big a deal about first times or are they really special?

16. Occasionally Hallie is forthcoming about her fears and concerns but usually lets them bubble inside for a long time. On the other hand Bernard is happy to unburden himself to basically anyone willing to listen. Do you tend to discuss your problems with others or keep them to yourself? Is either way healthier, is there a happy medium, or does it depend on the person?

17. As you get older, has your view on love changed at all? Are you more hopeful or more cynical about romance than you were a few years ago?

18. Do you think people usually break up because they feel that one of them has changed, or because they find they didn’t really know the other person as well as they thought? Or is there another cause you see happening a lot, such as meeting someone else?

19. Can the brain can be saying one thing about a person while the heart is saying another? Why do you think we sometimes make bad choices for partners? And is this a learning curve so that as you get older your selection process improves? If a friend told you that he or she loved someone who didn’t love them back, what would you be your advice?

20. Bernard goes through a very bad time after splitting up with Gil. Have you ever had a bad breakup? What helped you through it? Did you learn anything that ended up being useful later on?

21. What do you think is the most important element in a successful relationship?

The House on Primrose Pond

Love and Biology at the Center of the Universe

Local Knowledge
Back to Top