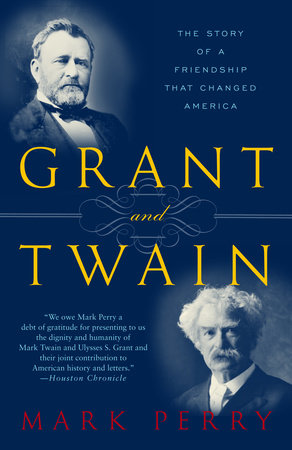 1. Ulysses S. Grant was not the only president to write his memoirs. Dwight D. Eisenhower and Lyndon Johnson wrote theirs also. Can you think of others? How do they measure up to Grant’s writing? How are they different?

2. Only one president is generally considered a better writer than Ulysses S. Grant. In fact, he won a Pulitzer Prize for his writing. Do you know who this is? How does his work differ from that of Grant’s work?

3. How do Grant and Twain’s views of slavery, African-Americans and the problem of racism differ? How were they the same? How do they differ from our own attitudes?

4. Ulysses S. Grant served two terms as President of the United States, yet he never once wrote about his experiences in the Oval Office. Why do you think that he focused on his war experiences?

5. There is some disagreement over why Grant wrote his memoirs. Some historians believe that he simply needed the money. Others say that he wanted to revisit his experiences in the war. Still others say he was influenced by his friend, General William T. Sherman. Why do you think he wrote his memoirs? What factors in his life influenced his decision?

6. Literary critics say that Mark Twain’s Huckleberry Finn was his best book — and that he never wrote anything to compare with it. Do you agree? Why do you think that Twain was never able to equal the greatness contained in Huckleberry Finn? What other later works by Twain might be considered its equal?

7. Mark Twain is considered a southern writer. He grew up in Missouri, a slave society. Yet he spent most of his life in Connecticut and some of his best work (A Connecticut Yankee in King Arthur’s Court) deals with being a Yankee. Which was he: a southerner? a Yankee? How would he have viewed himself?

8. Women played a major role in the life of both Twain and Grant. It is doubtful that either could have finished their work without the help of their wives. How has the role of women changed since the 1880s and 1890s? Is the domestic tranquility enjoyed by both Twain and Grant necessary for great writing to emerge?

9. American writer Ernest Hemingway said that all of American literature “comes from one book — Huckleberry Finn.” What do you think that Hemingway meant? Do you agree?

10. Adventures of Huckleberry Finn is now viewed in some part of our country as a controversial book, primarily because Mark Twain used the “N” word to describe Jim. Some schools have even banned the book. Do you think the book should be banned? How should we think of Twain’s use of the word? Is Twain’s use of the word simply a product of his time, which we should ignore, or is it a reflection of his own feelings about African Americans?

11. There have been significant political, social, and cultural shifts in America’s treatment of minorities over the last one hundred years. Do you think Grant or Twain had anything to do with these shifts? Can you find in their work any evidence of the deep doubts over the question of race that has been the focus of so much of our recent history? What, for instance, do you think that the Reverend Martin Luther King, Jr., or Malcolm X, or other civil rights leaders thought of Twain’s work?

12. Ulysses S. Grant was once considered a poor general and a great president. Then, for a time, he was considered a great general and a poor president. Now some historians who have studied his presidency say that he was a much better political leader than we have given him credit for. What particular historical or political trends might have caused these changes in judgment? Do you believe that historians are influenced in their judgments by their own times?

Peter the Great: His Life and World
Robert K. Massie