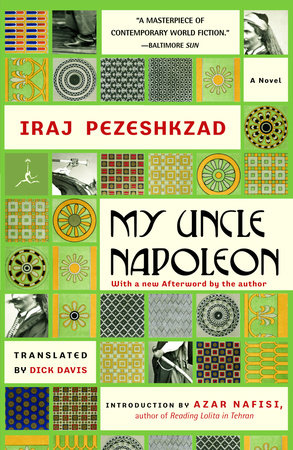 1. In her Introduction to My Uncle Napoleon, Azar Nafisi suggests that readers “will recognize that while the characters in this novel are excessively and jubilantly Persian, they are no different from other citizens of the world.” What are some specific examples of universal characters, relationships, and situations portrayed in the novel?

2. How did Dear Uncle Napoleon get his nickname, and why is he so obsessed with the British?

3. The Washington Post describes the novel as “a raunchy, irreverent, hilarious farce wrapped around a core of quiet sorrow.” Which plotlines best exemplify these two extremes, and how successful is Pezeshkzad at blending broad comedy with a thread of realism?

4. In his Afterword, Iraj Pezeshkzad talks about “traditional customs of society” that kept him apart from his first love and caused her to marry another man. He also confesses that the naïve young narrator of My Uncle Napoleon was inspired by his own experiences. Drawing on examples from the book, can you identify the Persian social customs and traditions that keep the narrator and his beautiful cousin Layli apart?

5. Why does Uncle Napoleon prefer Puri over the young narrator as a suitor for his daughter? What does the narrator think of Puri?

6. According to Azar Nafisi,  “Uncle Napoleonites can be found anywhere in the world and among the different strata of any society.” What is an Uncle Napoleonite? Would this label fit anyone that you know?

8. What role does Asadollah Mirza play in the extended family, and why is he so well liked by his relatives, despite the fact that most of them view his moral standards as “shameless”?

9. Consider the different couples depicted in My Uncle Napoleon, including the narrator’s parents, Aziz al-Saltaneh and her roving husband, Dustali Khan, and the simple Qamar and Cadet Officer Ghiasabadi. How do love, courtship, and marriage in 1940s Iranian society, as portrayed in Pezeshkzad’s novel, compare to the customs that were in place in this country during the same time period?

10. Why does Uncle Napoleon write to Adolph Hitler, and how does he view the notorious German leader?

11. Dick Davis, the translator of My Uncle Napoleon, writes about the immense popularity of Pezeshkzad’s novel in Iran. Why do you think this novel, first published in 1973 under the Shah’s regime and banned after the 1979 Revolution, struck such a chord and is now considered a seminal Persian work?

12. According to a reviewer from the Cleveland Plain Dealer, the publication of My Uncle Napoleon “may do more to improve U.S.-Iranian relations than a generation of shuttle diplomats and national apologies.” Do you agree? Can works of fiction really give us insights into people from other parts of the world? Can you think of other literary works that might fall into this category? Discuss.

Learn More About My Uncle Napoleon
print
Back to Top