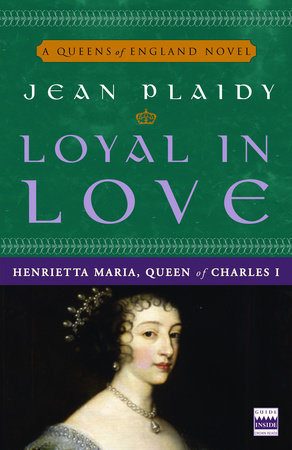 Their marriage had more to do with affairs of state than matters of the heart, but somehow the haughty French princess Henriette Marie grew to love her husband, the reserved King Charles of England. Fraught with perils beyond even the Crown’s control, theirs was a love tossed and torn by war and a marriage that ended in tragedy. In Loyal in Love, Henriette tells her story at last–admitting her flaws, sharing her joys and sorrows, and remembering the sweet and honest man she loved, a man too good to be king. This guide is a starting point for discussion of Jean Plaidy’s classic tale of a woman’s lasting loyalty.

1. At the beginning of Loyal in Love, Henriette takes responsibility for her husband’s death, saying it was her many mistakes that led to his execution. Considering her actions throughout the novel, how much blame for Charles’s troubles can be laid at her feet?

2. Through the course of the novel, who is revealed to be Henriette’s greatest enemy?

3. What kind of a child was Henriette? How does her behavior as a princess of France affect the rest of her life? Do you think that she change as the novel progresses?

4. What role does the nursemaid Mamie play in Henriette’s life? How does that role evolve over time?

5. What is Henriette’s first impression of England? What does she think of Charles? How does the incident involving Mamie and the Royal Coach on pages 74—76 set the stage for the tumultuous early years of their life together?

6. What is the cause of the rift between Charles’s friend and adviser Buckingham and the queen? How does his death change her relationship with her husband? What brings Henriette and Charles closer? Did the king make the right decision when he sent her French retinue home?

7. Religion is a constant source of strife between Henriette and Charles, and each hopes the other will convert. What do the English people think about Charles’s Catholic queen and her influence over him? Do you think Henriette should have converted to help Charles? Do you think it would have mattered if she had? In a similar situation, would you consider religious conversion?

8. Do you think Charles was a good husband? Do you think he was a good king? Why might these two things be mutually exclusive? How does his desire to please Henriette contribute to their downfall?

9. Why does Parliament make the Earl of Strafford an example in its war with the king? What do Charles and Henriette do in an attempt to save him? Why do they fail? Having promised him that he would not be executed, why does Charles eventually sign Strafford’s death warrant? Does this have the effect he hoped?

10. Henriette’s lady, Lucy Hay, reveals Charles’s plan to arrest key members of the faction against him to Parliament, thwarting his attempt to regain control. Did you suspect Lucy Hay of treachery? Why didn’t Henriette suspect something when she learned that Lucy was under the influence of John Pym?

11. Is Henriette successful in her trip to find help from the Dutch king? What is the state of affairs in England when she returns?

12. Discuss the poignant scene on pages 308 and 309 in which Elizabeth and Henry visit their father just before he is executed.

13. How does Henriette take the news of Charles’s death? How is she treated upon her return to France? Aside from the loss of Charles, what do you think is the hardest part of living in exile in her old homeland?

14. From the moment of his birth, Henriette’s son Charles seems different than other children: stronger, bolder, and more alert to the world around him. Do you think he was more suited to be king than his ill-fated father?

15. Is Henriette’s return to England once Charles has reclaimed the throne as glorious as she hoped it would be? What mars it for her? How does she find life as the Queen Mother? How do Charles and her other children feel about the Catholic faith that is so important to their mother?

16. By the end of the novel, what lesson has Henriette learned about herself?

Learn More About Loyal in Love
print
Back to Top