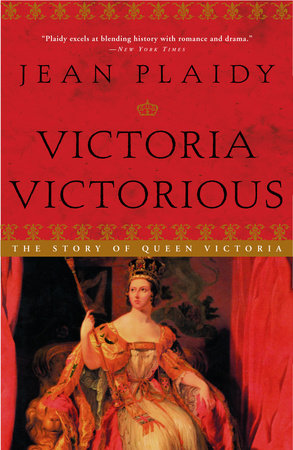 Princess Victoria knows from a young age that she will almost certainly become Queen of England. Her mother, also acutely aware of Victoria’s destiny, keeps the princess under a watchful eye against the dangers of scheming uncles–always, she constantly reminds her daughter, working for the good of Victoria. But during this protective (but stifling) custody it is the company of Victoria’s sister, Feodore, her governess, Baroness Lezhen, and visits to her revered Uncle Leopold that makes life bearable as she waits impatiently for her eighteenth birthday–when she will be free. In fact, it is not long after this milestone that Victoria is crowned queen, beginning the longest reign that England’s throne has ever known with the heartfelt promise, “I will be good.” The affectionate and energetic Victoria is instantly beloved by the English people and delighted with her prime minister, and adapts to her new role during the early years of her reign. But the greatest change is yet to come. When Uncle Leopold’s favorite nephew, Albert, becomes Victoria’s husband, one of history’s great romances begins. The mirthful Victoria and serious, studious Albert become a devoted pair, and Victoria comes to be guided by Albert’s political advice and his high moral standards. As the government changes leadership, the empire expands, and Victoria and Albert’s family grows, we see Victoria evolve from a headstrong young princess into one of the world’s great monarchs and, eventually, a reclusive widow, as well. She struggles throughout to subdue her quick temper, protect her family, and keep her trusted advisors close at hand, but it is always the great warmth of their “little queen” that endears her to her countrymen, and her loyalty and honesty that she relies on to guide her reign.

1. Victoria acknowledges that she is “a woman who must be dominated by men.” Indeed, the most influential characters in her story are men, and her descriptions of them often tend toward an exaggeration of their qualities that Victoria begins to question somewhat at the end of her life. Why do you think she depended so heavily on the men in her life? What does it say about her opinion of herself, and of women in general? What in her past or situation would lead her to this dependency?

2. Why did Victoria consider Sir John Conroy so abhorrent? Do you think she reacted too strongly against him?

3. Which of Victoria’s advisors do you trust the most, and why? Is this the same one you would find most appealing as a friend?

4. ) Bertie, the Prince of Wales, becomes popular with the people thanks to his easy manner and very human lifestyle. Considering the way the press has responded to Victoria and Albert, do you think the people would continue to value these qualities in a king?

5. Victoria found herself a sovereign as a very young woman, as did her grandson Wilhelm. Bertie, on the other hand, will be a middle-aged man by the time he assumes the throne. King William, whom Victoria succeeded, was older still when he became king. Do you think their respective ages are significant? What evidence from the book would support or refute the idea that an older person makes a better ruler?

6. Victoria often remarks on the ever-changing mood and allegiances of “the mob.” Do you think she truly understands what motivates them? Does she make the most of her opportunities to bolster her own popularity? How much does this popularity matter to her–is it more often a matter of personal gratification or political security?

7. Why do you think Uncle Leopold chose Albert for Victoria? Were his aims primarily political, or were his designs the result of real affection for Victoria and Albert? Do you think he accurately anticipated what their marriage–and Victoria’s reign–would be like?

8. Do you agree with Albert that Lezhen was too lenient with Victoria as a child? Given what we learn about her personality during the course of the book, do you think Victoria would have been a different kind of ruler if she had had more discipline as a child?

10. What do you think of Lord Melbourne? Does his wait-and-see attitude speak to steady character or lack of courage? What do you consider his best and worst qualities as an advisor?

11. Queen Elizabeth has a rather lowly place in the doll collection Victoria keeps as a girl. What do the feelings Victoria expresses about the doll say about her understanding of Elizabeth as a woman and as a queen? What in Victoria’s situation do you think colors her perception of Elizabeth?

12. Is Victoria’s disassociation with her mother understandable? What do you make of their eventual reunion? Is Victoria sincerely happy to have her mother back in her life as her own family grows, or is she merely trying to make Albert happy by reaching out to her?

13. Is it hypocritical of Victoria to adopt such high moral standards for her court when her own family has something of a checkered past? How do she and Albert justify shunning others with disreputable relations when they themselves have families who have been touched by scandal? Is this excusable?

14. Compare Victoria to her daughters Vicky and Alice. What, if anything, do they have in common? Why does Victoria prefer Alice? How does Victoria’s opinion of Vicky change when Vicky marries and moves away? How do you think Albert’s preferences come into play in these relationships?

15. As newlyweds, Victoria and Albert seem worlds apart in many ways, but during the course of their marriage Victoria grows to revere Albert, and convinces herself that his choices must be right. How much do you think she really buys into his way of thinking? Why do you think, in many cases, she seems to trust his judgment more than her own?

16. What qualities make Victoria “victorious”? In Plaidy’s account of her, is she a strong ruler? How would you characterize her as a sovereign? Is she politically astute? How interested or disinterested is she in politics and the welfare of the English people?

Learn More About Victoria Victorious
print
Back to Top