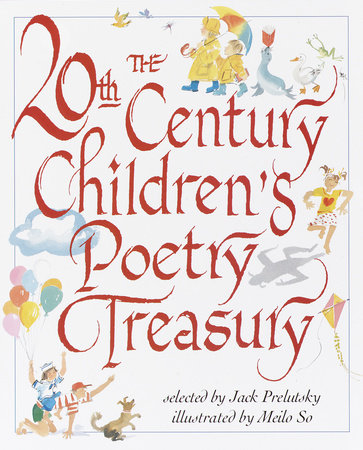 The 2Oth Century Children’s Poetry Treasury, selected by Jack Prelutsky, illustrated by Meilo So, is a compendium of over 200 of the best poems of this century. This activity sampler is designed to introduce teachers to the Treasury and includes a sampling of classroom activities with curriculum links.

Visit us online at wwwrandomhouse.com/teachers for a complete guide to the Poetry Treasury and its companion book, The 20th Century Children’s Book Treasury, selected by Janet Schulman. Both are published by Alfred A. Knopf Books for Young Readers.

A Word from Jack Prelutsky

This treasury has been culled almost entirely from my private collection of children’s poetry books. I read thousands of poems to select slightly over two hundred that I felt represented the scope and variety of children’s verse produced in the twentieth century, and had no trouble including at least one poem from every decade. Children’s literature in general has blossomed in our time, and poetry in particular has entered a "golden age."

Until this century, most children’s poetry was either syrupy sweet or overblown and didactic, and tended to talk down to its readers. Contemporary children’s poets have thrown all that condescension and moralizing out the window, and write with today’s real child in ruind. They write about sports, sibling rivalry, outer space, monsters, food fights, school, and just plain silliness. Of course today’s poets still address the ageless themes of children’s poetry-imagination, nature and the seasons, who am I?, wordplay, and the many moods of human beings. My final selections represent all of these and many more.

I truly believe that most of the best poetry for children has been written during my own creative lifetime. With this in mind, the collection is weighted with the poetry of my contemporaries.

Children’s poets today are producing some wonderful work, and it’s apparent to me that the torch is being passed to very capable hands. The renaissance continues into the twenty-first century, and I am delighted.
-Jack Prelutsky (excerpted from the introduction to The 20th Century Children’s Poetry Treasury)

It’s never too early to expose students to poetry. Not only is poetry a valuable tool for teaching students how to read, but also poems make students feel, transport them to another place, and expose them to rich language. As one first grader said, "A story just talks, but a poem sings." The 2Oth Century Children’s Poetry Treasury contains 211 poems by 137 poets, arranged by theme. It is perfectly suited for introducing young readers to quality poetry.

Children naturally like poetry. Poems have a predictable rhythm and are often realitybased. They have everyday meaning, making it easy for students to identify with.

Getting started…
To increase students’ interest in poetry, make your classroom poetry-friendly. Hang poster boards with poems written on them all over your classroom: from the ceiling, on the bulletin board, off the side of your desk, etc.

Read -Aloud
For primary grades, help students learn to read by reading poetry out loud to them. Make a large chart with the text of a poem written on it in oversize letters. Point to the words as you read, showing left to right movement and one-to-one correspondence between the words and the poem as a whole.

Writing
For second grade and up, have students write their own poems, as writing poetry is a useful way of studying it. And since reading and writing go hand in hand, students’ writing reinforces reading.

Art
In The Snowy Day, by Ezra Jack Keats, Peter experiences the wonders of snow. The fluffy white carpet makes a nice memory, even if it melts away. Create 3-D winter scenes (use cotton for snow) and display them on your bulletin board.

Drama
Freight Train, by Donald Crews, depicts the wonders of a colorful train in motion. Create a class train. Appoint a child to be the engine, and then "attach" other children. Add sound and movement. Explain that you have created cooperation in motion.

The Twelve Days of Christmas

The Night Is Yours

Santa in the City

Annie and the Wild Animals