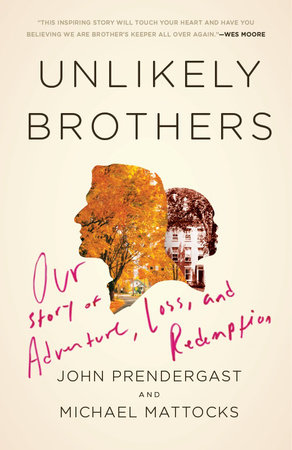 Introduction
Unlikely Brothers is a true story of two lives forever altered by the bonds of friendship. Combining the inspiring spirit of The Blind Side with the stark realism of Push, this is a memoir of two young men who came from very different backgrounds but shared a need for friendship and hope.

Peace activist and cofounder of the Enough Project, John Prendergast is known as a champion of human rights in Africa. But his youth was marked by depression and insecurity as he struggled against his father’s wrath and his role as an outcast at school. At age twenty, a chance encounter introduced him to seven-year-old Michael Mattocks, who was living out of plastic bags and drifting from one homeless shelter to the next with his mother and siblings on Washington, D.C.’s toughest streets. J.P. and Michael soon formed a unique kinship, and in the years that followed, J.P. took Michael and his brothers on outings to read in the library, go fishing, play basketball, or feast on fast food.
This friendship has lasted for over twenty-five years; even when they became estranged from one another, the knowledge of the mutual trust they had established was a powerful force in sustaining them through two very separate war zones. For Michael, survival meant becoming a drug kingpin. For J.P., it meant bringing relief to the victims of Africa’s most violent civil wars. Making their way back to each other in the end, they beautifully showcased the true meaning of brotherhood and the importance of mentorship.

The questions and discussion topics that follow are designed to enhance your reading of Unlikely Brothers. We hope they will enrich your experience as you explore this stirring meditation on the families we create for ourselves.

Questions for Discussion
1. In Michael’s opening chapter, he writes, “Nobody should feel sorry for us, the way we was back then. I know it sounds funny, but we were happy—at least us kids. We didn’t know it was bad. My mother cared a lot about us. She made sure we ate every day, even if it was just a little something. … Those hunger pangs would never really go away, though” (page 3). What does this say about the way children perceive the world, and the universal needs of children?

2. In contrast, John describes a childhood of increasing affluence as his father rose through the ranks as a salesman but left John emotionally starved. How did Michael feed John’s soul?

3. Denise’s other sons are James (Willie’s son), who struggled with a fierce temper and died in a tragic shooting; artistic Tyrell, who took his own life; David (also Willie’s son), a survivor, described by Michael as “a work in progress”; and young André, born in 1984 when the family was living in a shelter. John, a sensitive and volatile youth, was very different from his biological brother, Luke, who always managed to appear calm. How do differing personalities shape a family and affect the fates of all family members? As brotherhoods were formed between Michael’s family and John’s, how did they redefine “brother,” forever changing the dynamic of both families? Do bloodlines matter in Unlikely Brothers?

4. Discuss the women in Michael’s family. Denise, his mother, is generous, taking in her sister’s children. Yet she is also vulnerable, terrified when she sees her sons descend into the drug dealers’ world. Sabrina is a fierce, protective big sister who knows how to handle a weapon; Michael has never seen her lose a fight. What did Denise and Sabrina teach him about women? How was he eventually able to build a strong marriage to Nikki?

5. John describes the challenge of juggling school, work, and advocacy and the toll it took on his marriage. Michael recalls that John always brought work with him: books to read, reports to write. Was John’s workload unhealthy, or an external sign of a meaningful life?

6. How were you affected by the story of Khayree and his brother Nasir, who was shot to death? Why was it important for John to reconnect with Khayree after so many years?

7. As a little boy, Michael dreamed of buying his mother a house. Meeting Gomez led him to a life of power within the community and huge sums of instant money, without having to stay in school or report to a boss for minimum wage. Yet he says, “It’s funny how a hundred-dollar bill, earned one way, can do things that the same hundred-dollar bill can’t do if you get it another way.” John’s father was loyal to his company for decades, playing by the rules and slowly building a prosperous life for him family, but it ended bitterly when he was forced into early retirement. What does the book teach us about the role of money in life?

8. Michael continually says that he had few employed male role models in the neighborhood; Nikki’s father, a lifelong crane operator, was an exception to the rule. When John tries to help Michael find work, blatant racism is an obstacle. As of spring 2012, the unemployment rate for African Americans is higher than the rate for other ethnic groups, and it’s much higher than the national unemployment rate. What do you predict the future of young men growing up in Michael’s old neighborhoods?

9. John’s parents were devout Catholics, and John returns to the faith in the book’s closing chapters. What should the role of religion be in addressing the world’s sorrows, from the type of emotional anguish John experienced as a child to the genocides he devoted his adult life to stopping?

11. As Michael’s life of crime escalates, John refuses to talk with him about it, leading to years of estrangement. What binds them together, despite so much time apart—and so much denial when they were spending time together?

12. As his father’s health declines, John finally confronts him about his explosive rage, only to discover that his father had a wildly inaccurate perception of him and could not remember John’s earnest achievements as a straight-arrow kid. How does this experience compare to your own family memories? Who do you consider your siblings to be (including those who are not related to you)?

13. Discuss the effect of the intertwined voices in Unlikely Brothers. As John and Michael describe two perspectives on one story, what do we discover about life stories?

14. The book concludes with hope that more people will realize they can be big brothers, big sisters, or mentors. Who or what were your greatest sources of support when you were in need? Would you like to start mentoring someone? There are five organizations suggested in the book that provide a helping, healing hand. Which ones would you be most interested in getting involved in?

About the Authors
JOHN PRENDERGAST is a human rights activist and author. He is cofounder of the Enough Project (enoughproject.org), an initiative to end genocide and crimes against humanity. Working for the Clinton administration, he was directly involved in a number of peace processes in Africa. John helped create the Satellite Sentinel Project with George Clooney; coauthored two books with Don Cheadle; and worked on films with Ryan Gosling. He traveled to Africa with 60 Minutes for four different episodes. He has been a Big Brother since 1983.

MICHAEL MATTOCKS lived in homeless shelters as a child and began dealing drugs as a teenager. He is now a husband and father of five boys, working two jobs in order to support his family. He helps coach his sons’ football teams.

John Prendergast is available for select readings and lectures. To inquire about a possible appearance, please contact the Random House Speakers Bureau at rhspeakers@randomhouse.com or 212-572-2013.
Learn More About Unlikely Brothers
print

The Heart of Business
Liz Mohn

The Opposite Field
Jesse Katz

Girl on the Couch
Lorna Martin

The Power of Progress
John Podesta

The Revolution Where You Live
Sarah Van Gelder

The Wisdom Teachings of the Dalai Lama
Matthew E. Bunson

You Buy the Peanut Butter, I’ll Get the Bread
Renee E. Warren and Kirsten Poe Hill

On Six Continents
James K. Bartleman
Back to Top