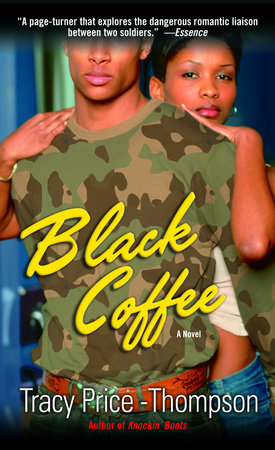 The following reading group guide was created to enhance your group’s discussion of Black Coffee by Tracy Price-Thompson.

1. Many people seem captivated and enthralled by men and women in uniform. What intrigued you about a romance in a military setting? What do you think about the amount of control the military has over someone’s personal life? Could you operate comfortably in such an environment?

2. In the novel, Sandie came from a close-knit, loving family with strong ties. How did this help shape her character and bolster her ability to cope when times got rough? What do you think about the way the military forces its members to travel to far corners of the world, out of the immediate reach of their loved ones? How do you think she felt about leaving her children behind for extended periods of time while deploying to remote areas?

3. Based on your own experiences, how much could you identify with Sandie’s choices in men? How does Sandie compare to you and the women you know in regard to how she handled her responsibilities to her children, her job, her family, and her love life? Do most women, much like Sandie, look for love, but often in the wrong places?

4. What do you think of a woman who has it all together professionally, but seems to have less success in her personal life? Does our society force women to choose between having a great career and being a good mother and a good mate?

5. Sandie was devastated when she learned of her sister’s HIV status. Have you ever encountered a situation where someone you loved was diagnosed with an illness with a heavy social stigma attached, such as HIV? How do you think experiences like this change a person? How did it affect Sandie? What was Ladelle’s reaction to her illness?

6. In the beginning of their relationship, Rom seemed to be the answer to Sandie’s dreams. There was little doubt in her mind that he truly loved her. How did you feel about the fact that Sandie entered into a relationship with Rom while he was still married? Did she fall for him too readily? Or did she fight a good fight?

8. Rom fancied himself a king. How much of Rom’s inner conflict do you feel was a result of his father’s leaving the family during his childhood? Did this have a direct bearing on the way Rom felt about leaving his own sons? How do you feel about the fact that Romulus pursued a relationship with Sandie while he was still married to Lou? Was his personal misery and desire for true love enough justification for leaving his wife and children?

9. Since it was Rom’s idea for Sandie to stop taking the Pill, what do you think of his negative reaction when he discovered she was pregnant with his child? How did you feel when he blamed Sandie for his not being with his sons?

10. Is Rom a dog? Or is he simply a nice guy with conflict and issues? What about him appeals to you? Is there anything about him that makes you uncomfortable? What was your gut reaction when he called Sandie a bitch?

11. How do you think Sandie’s accident reinforced Rom’s feelings toward her and their children? Do you think he’d already realized the error of his ways before she was hit? Or was seeing her body crushed beneath the Jeep the true catalyst for his change?

12. How did you feel about Sandie’s relationship with her mother and two sisters? What about her friendships with Sparkle and Charmel? Do you think women tend to nurture and support one another through rough times as fully as these women supported Sandie? Are there women in your life who will stick by you through thick and thin?

13. Sandie enjoyed a very close relationship with her father. Do most women use their fathers as measuring sticks for the men in their lives? Did Sandie expect Rom to love her children as fully and unreservedly as her own father loved her half siblings? If you were a single mother, how would you have reacted if a man shouted to you, “Those are NOT my kids!”

14. Why do you think Sandie agreed to marry Rom at the end of the story? Was Ladelle right in her assessment of the growing single-parent crisis for black families in America? Do you think Sandie should have hoisted a “strong black woman” flag and raised her five children alone? Do we all have issues and enter into relationships with baggage from previous loves? What is the role of forgiveness in building and maintaining a strong, realistic black family? Does this story prove that true love conquers all?

Crazy for You
Juliet Rosetti

Until You Find Me
Amber Hart

All Is Fair…
Linda Cajio

Silk on the Skin
Linda Cajio

All I Need Is You
Wendy S. Marcus

Captured by You
Amber Hart

A Pinch of Love
Alicia Bessette

A One Woman Man
Travis Hunter

Just Give Me a Reason
Rebecca Rogers Maher

For Love of Lacey
Sandra Chastain

Off the Rails
Jill Sorenson

Love or Something Like It
Deirdre Shaw
Back to Top